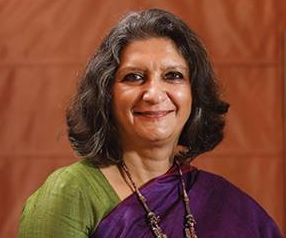 "We never had much money or facilities, but we had excellent colleagues and academic freedom. Today, things are bad; things are comically bad in my institutional home," professor Kavita Singh said.
Picture courtesy: Infosys Science Foundation website
PTI   |   Bangalore   |   Published 06.01.19, 07:50 AM

Kavita Singh, the professor who won the Infosys Prize on Saturday night, said things at her university were 'comically bad', and as an example cited that she got to know her leave to receive the award had been denied after she landed in Bangalore.

The Infosys Science Foundation organises the annual award that includes a gold medal, a citation and a prize purse worth $100,000 (or its equivalent in Indian rupees).

Singh is the Dean of the School of Arts and Aesthetics at JNU.

Speaking after receiving the award, Singh thanked the university where she has been teaching for 17 years and said that until recently, it was 'a very congenial and supportive place'. 'We never had much money or facilities, but we had excellent colleagues and academic freedom. Today, things are bad; things are comically bad in my institutional home. How bad you may ask? After I came to Bengaluru, I checked my e-mail and found that the leave application I had put in to come here and receive the award had been rejected by my vice-chancellor. So please be warned that my presence on this stage today is illegitimate,' she said.

Last year, Singh was barred from a JNU academic council meeting where decisions were to be taken on major changes to admission tests.

The academic council is chaired by vice-chancellor M. Jagadesh Kumar and mainly consists of professors. The JNU Teachers' Association said in a statement then that the dean of arts and aesthetics, Kavita Singh, had received a letter from registrar Pramod Kumar debarring her from the academic council meeting 'till the outcome of the proceedings of the inquiry committee is placed before the executive council for a decision'. Singh and other academic heads were earlier reinstated by Delhi High Court after being removed for expressing inability to implement compulsory attendance norms introduced in JNU last year.

The teachers' association had said last year: 'While all attempts made by her (Singh) to be allowed to make her point... in the AC meeting held on 18.5.2018 were turned down by the Chair... her subsequent attempts to make herself heard were construed as... misconduct and misuse of a high administrative position....'

The association pointed out that the inquiry committee was set up despite the high court reinstating Singh, 'thereby allowing her to represent' the School of Arts and Aesthetics in the academic council.

Singh on Saturday received the Infosys Science Prize for her study of Mughal, Rajput and Deccan art. Her work shows the significance of museums in highlighting the social impact of art and thereby, relates visual culture to large contemporary questions of secularity, modernity and political conflict.

The the foundation honoured six eminent professors across different categories of science and research at an awards ceremony on Saturday night, while also celebrating its 10th-year milestone.

A six-member jury of renowned scientists and professors selected the winners from 244 nominations received in six categories.