The King’s Palace, The Dark Room 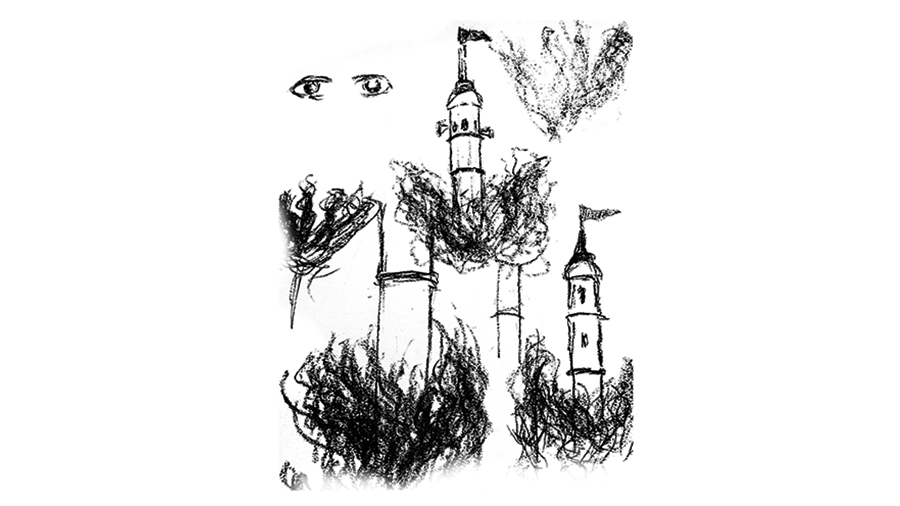 When I reach the wall, will I morph into the people facing the wall, turn my back towards the mayhem behind us?
Sourced by the Telegraph
Anubhav Sinha   |   Published 04.10.20, 12:59 AM

With films like Mulk, Article 15 and Thappad, Anubhav Sinha has marked out a salient space for socially and politically interrogative cinema. His blunt, in-your-face work has become a thing of wide acclaim. Through the recent lockdown, he  put his energies into directing Bambai mein kaa baa, a Bhojpuri paean to the anguish of migrant workers sung and performed, rap-style, by Manoj Bajpai; it became a runaway chartbuster.

For a while now, Sinha has also been among a palmful of film industry eminences screaming concern over national drift in directions he deems palpably disturbing. His is a voice of anger, outrage, frustration, suffocation; often stentorian, often also directed inwards. Amid the bizarre and unbounded shenanigan that has trailed the death of Sushant Singh Rajput, he tweeted: “Obviously Bollywood doesn’t know how to collectively stand up for itself and it’ll pay the price.” On the stunning “not guilty” Babri demolition verdict, Sinha tweeted: “Congratulations Mr Lal Krishna Advani you are now acquitted of the charges of single-handedly drawing a bloody line across the soul of this country...” His Twitter timeline, to use Twitter terminology, burns with much else, and burns consistently.

We invited Sinha to articulate what it is that hurts and troubles him, and often leaves him distraught. He sent us this breathless allegory of a nightmare. In a 1987 essay on Ryszard Kapuscinski’s memoir of Angola, Salman Rushdie wrote: “What is ‘normal’ in these abnormal days? For many of us, any definition of the quotidian would still include notions of peace and stability. We would still, perhaps, wish to picture everyday life as rhythmic, based on settled and repeating social patterns. Ryszard Kapuscinski’s work seems to be based on his knowledge that such conventional descriptions of actuality are now so limited in application that they have, in a way, become fictions.”

Sinha’s sense of the world around him may speak to us of a similar hyperreality, where words and narratives, as we know them, aren’t able to measure up to our daily extraordinariness. His missive came appended to a soulful Ghalib couplet on loss and bewilderment as description of the human condition.

“Why are you all so scared about a story?” the Joker said. “Come on, kid! Tell the story you want to tell.”
Sourced by the Telegraph

I have never been great at running, especially running away. Am I even running in the right direction? There are no roads ahead of me. I see a wall and some people facing the wall. They are not looking at me; they can’t hear me scream for help; they can’t hear the murderous crowd chasing me.

When I reach the wall, will I morph into the people facing the wall, turn my back towards the mayhem behind us?

I am trying to remember why and how I got here.

My father wanted me to work at the bank near the King’s Palace. I was good at mathematics and better at English, the language the Queen liked and her servants revered. Every day on my way to the school I crossed that Magic Lane on my left.

Children like me would gather there to wondrously stare at the famous Show Square at the far end of the Magic Lane.

At the Show Square, there was a circus, and musicals on stage that you could only watch after buying tickets. There was a man on stilts and there was a man who walked straight on a tilted wall. There were body builders and dancers, singers and magicians. People who bought tickets could watch them from close. We watched them from a distance.

All the children longed to meet the wizards.

I was the only one who wanted to be a wizard. I felt I knew them personally. I loved them. I admired them. I always wondered what made them artistes. Someday, I believed I would meet them. I wanted to perform with them. Most of my friends did not know I wanted to do that and those who did laughed at me. They said they were great artistes. When they performed the world watched in awe. I did not stand a chance. I had never performed before but I was fascinated by them.

One day I snuck in without ticket. I saw them performing up close. The power of their art moved me; their dialogue inspired me. The Stilt Man was the best. In the middle of the act he would suddenly stop and say out loud, “Ladies and Gentlemen.” This was the moment.

Every Performer would freeze looking at the Stilt Man. He would then deliver my favourite monologue. I had heard it from the far end of the lane numerous times.

That day I heard it a few metres away from him. The Stilt Man looked into my eyes at the peak of his soliloquy and tears began to roll down my cheeks. Suddenly each one of them looked at me. The show stopped.

The Body Builder came to me and asked politely, “Why do you cry, kid?” I had no words. I continued to cry. I had loved them for years and now they were all looking at me. They had large hearts. They cared about vulnerable people like me. They wanted to help people like me.

The Body Builder, who played the villain, was kneeling down before me holding my hand, asking if I needed something. I don’t know what happened for a moment. I said I wanted to perform with them. They cheered for me. They clapped and the Man from the Tilted Wall softly asked me, “What is your performance, kid?”

“Why are you all so scared about a story?” the Joker said. “Come on, kid! Tell the story you want to tell.”

Everyone was looking at me. I did not want to be the first one to tell the story of the Dark Room in the King’s Palace. Suddenly a very frail man appeared from a corner. The Show Square was quiet. The Frail Man walked to the centre of the stage. All the legends watched.

“Those stories must be told,” the Frail Man said. “If a kid does not have the courage to start the story, I will.”

I was not going to lie to him. He asked again, “Will you complete the story?”

As I spoke those words, the King’s soldiers began to appear from nowhere. The famous Performers were looking at the Frail Man. They adopted positions from where they would seem detached and disinterested. I was surprised. It was forbidden to talk about the Dark Room.

Everybody seemed certain that the Frail Man wasn’t going to tell the story.

The crowd waited. Their eyes were on the Frail Man. If he would start telling the story, other Storytellers would follow and then it would be my turn to complete the story.

I saw one of the Body Builders leave. The soldiers were spreading out in a manner that no one could leave if they wanted to stop them. I felt certain the Frail Man wouldn’t start telling the story. He looked at the soldiers; he looked at the artistes.

The Frail Man walked to the centre of the Show Square. A big group to the left of the soldiers clapped for him. Some others moved closer to that group. The Frail Man started to tell the story.

The group on the left clapped again. The soldiers pounced on them. I could see at the far end the Man on the Tilted Wall was leaving the Show Square. The Frail Man continued the story. A soldier pointed the gun at him and the Frail Man told the story louder.

The group on the left, the ones who clapped for the Storytellers, was being flogged as life bled out of the Second Storyteller. It was the most powerful, the most necessary story. But as the soldiers continued killing the Storytellers, I knew we were going to fall short of Storytellers to complete the story of the Dark Room in the King’s Palace.

The soldiers flogged the cheering group; they fell on the floor, wounded, bleeding. The few men and women still standing in the cheering group implored the Performers to come forward, to keep telling the story.

It was my turn.

I walked slowly to the centre of the Show Square. The soldiers flogged the few men and women left standing in the cheering group. They implored me through their sobs to tell the story, to complete the story. I was full of fear. I was afraid to complete the story of the Dark Room in the King’s Palace.

I turned towards the Performers and let out a scream, a question. “O, Performers! Tell me what to do? Shall I tell and complete the story?

Or shall I choose silence like you did?” Only a small part of the story was left to tell. I was full of fear. I was alone on the stage.

I was still standing on the Show Square with the silence of the Performers. I asked my question again. “Tell me what to do? Shall I tell and complete the story?”

I would have happily told the rest of the story. I was a kid full of fear. I was alone. All I needed was a word of support, a nod from the Performers. I would have told the story.

Nobody answered me. Nobody held my hand. The soldiers pointed their guns at me.

The soldiers chased me. A crowd joined them and pelted stones at me. Some stones hit me. I started to bleed.

I did not know what to do and I ran. I saw an open gate that I had not seen yet. Maybe it was not a gate but an illusion. Maybe a trap. I turned back for a last look at the Performers. They had left. I was alone. I ran. I ran through the gate. The soldiers, the crowd followed me.

Suddenly I was in another lane I had never seen before. I knew it was a trap.

I was running for my life. I would see a wall ahead of me and then suddenly another lane would open up. It couldn’t be a dream. My scars are real. I am hurting, I am bleeding.

I can hear the crowd closing in on me, weapons in their hands. I can hear its beastly growl over my right shoulder.

Babri Masjid verdict: Justice weeps, what more do I say?