TRS sweeps back to power, riding on welfare 56 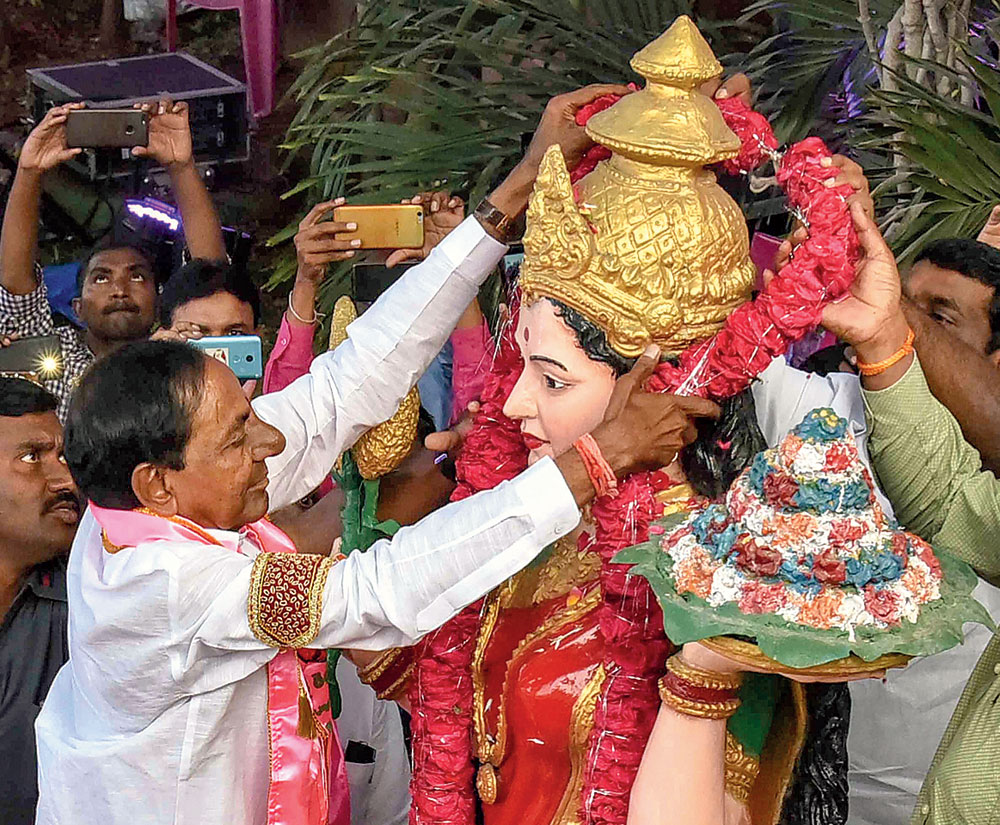 Chief minister K. Chandrashekar Rao’s TRS stormed back to power in Telangana with a more than two-thirds majority and nearly half the votes polled in the four-year-old state’s first Assembly election, riding a raft of welfare schemes and amenities like power and water.

The Congress, the main Opposition party, which led an alliance of the Telugu Desam Party (TDP), CPI and the Telangana Jana Samiti (TJS), won fewer seats than it did in 2014 in undivided Andhra Pradesh, although its vote share increased marginally.

The biggest loser was the BJP, although it retained its vote share of around 7 per cent. The party was reduced to one seat from five in the outgoing Assembly — a possible outcome of an understanding between the ruling Telangana Rashtra Samithi and the All India Majlis-e-Ittehadul Muslimeen (MIM).

The MIM, a Hyderabad-based party that restricted itself to its home turf, retained all the seven seats it won last time.

Chief minister Rao had dissolved the House in September, well ahead of schedule, to avoid simultaneous polls with next year’s Lok Sabha elections.

His son, minister K.T. Rama Rao, won Sircilla for the third time by almost 90,000 votes, and nephew T. Harish Rao, also a minister, won Siddipet for the seventh time in a row by a margin of almost 1.2 lakh votes.

The TRS increased its vote share from 34.3 per cent to around 47 per cent, underscoring the impact of its 56-odd welfare schemes, 24-hour power supply and the Mission Bhagiratha to provide drinking water to every resident of the dry Deccan plateau.

Ally TDP, which had 15 seats in 2014, won two seats this time. Film icon and party founder N.T. Rama Rao’s granddaughter N.V. Suhasini lost by more than 40,000 votes, while the party’s vote share plummeted to 3.2 per cent from 14.7 per cent. Another ally, the CPI, which won one seat last time, drew a blank. The TJS failed to open its account.

The BJP’s only winner was T. Raja Singh who retained Goshamahal in Hyderabad. Its legislature party leader, G. Kishan Reddy, lost to the TRS’s K. Venkatesham by around 1,000 votes in Amberpet, while state unit president K. Laxman came third in Musheerabad.

The All India Forward Bloc is the only Left party in the Assembly. Nominee K.C. Patel won from Ramagundam, securing the party’s lone seat in the House.

The CPM, part of the Bahujan Left Front, came third in Bhadrachalam, which it held. The Front itself failed to get off the mark.

One seat went to an Independent.