Telangana Jana Samithi is respected across the political divide; TRS getting blame for unemployment 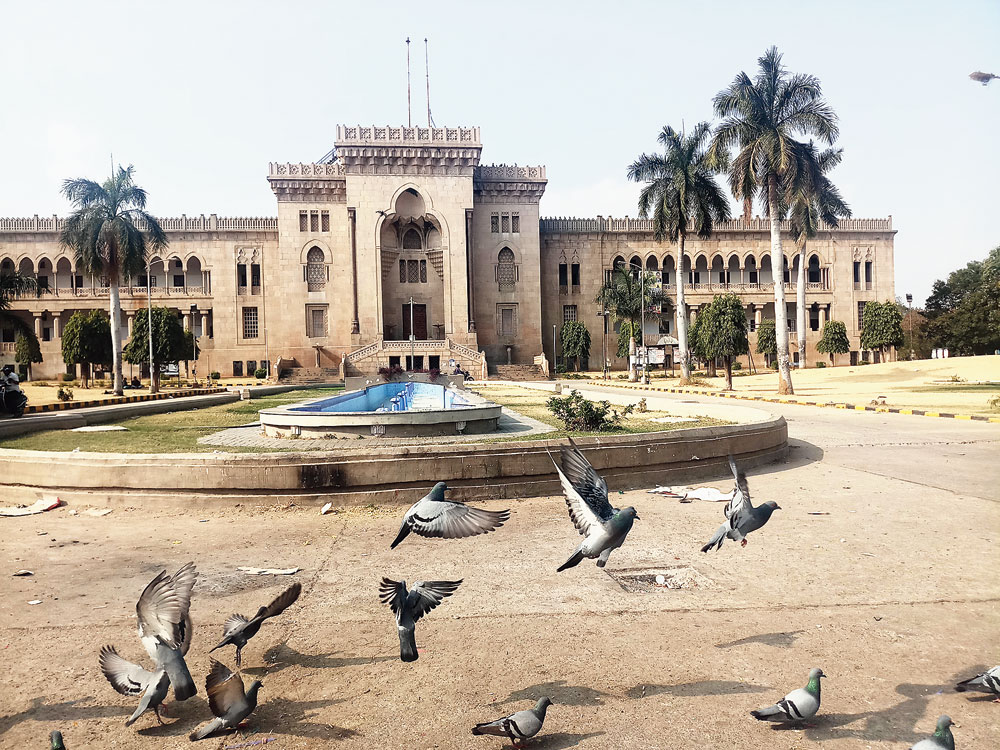 The cradle of Telangana is torn between gratitude for the past and anxiety about the future.

On the eve of the Assembly elections, a dipstick survey was underway outside the New Godavari Hostel of Osmania University, where a militant agitation for statehood erupted in 1969, followed by rolling protests from 2009. Several students had immolated themselves during the drive for statehood that was achieved in 2014.

Venkatesh Puram, who runs a refreshment kiosk outside the hostel, asked his clients whom they would vote for in the elections that took place on Friday. Every single one of the 15-odd students who stopped for tea said before leaving: “Kutami”.

Kutami or People’s Front is the Opposition Congress-led alliance that includes the Telugu Desam Party, CPI and the Telangana Jana Samithi (TJS).

On the campus, spread over more than 5sqkm, the X factor is not the Congress or the Desam but the TJS, which is led by M. Kodandaram, a former professor of the university who led the statehood campaign.

Puram’s customers, mainly from the hostel, were all leaving after classes on Thursday to their hometowns across the state to vote.

“I will vote for the Telangana Rashtra Samithi (TRS) because they have given us water connections and road signage. TRS leaders immediately visit us if someone dies in the family and give us cash for the last rites. But here it is total Kutami because students are not getting jobs,” Puram said.

Last year, a student had hanged himself on campus, which led to protests over suspicion that his suicide note was forged by police to hide his motive, which student groups claimed was the government delaying job recruitments.

Several students, including graduates, jog on the sports ground to practice for a constable recruitment test next month.

Ashok, an MSc zoology student, was on Thursday headed home to Suryapet in southern Telangana to vote for the Congress.

Over tea at Puram’s stall, he said: “After statehood, the government forgot about us. The slogan then was Neelu-Nidhulu-Niyamakalu (water, funds, jobs). Let alone jobs, the government did not even grant funds declared for (the university’s) centenary year in 2017. Non-teaching staff organised a 40-day strike this year for regularisation of their jobs. Their attempt was in vain.”

The zoology student stressed that he is “not Congress”.

On a campus still covered by posters of Naxalite student leader George Reddy, killed by goons in 1972 and who inspired the 2004 Mani Ratnam film Yuva, identifying with the Congress is still not fashionable.

“Things are worse here than (what it was during) the Nizam’s rule, which was also resisted on this campus. I am voting for the Kutami because the TJS is in it, and because it is our duty to resist an undemocratic government,” Ashok said, referring to the police crackdown during the centenary celebrations.

The TJS is respected across the political divide here, although it is the local Congress candidate who has campaigned the most on campus.

Kavitha and Prasad, MTech students who hail from the Rajendra Nagar constituency — a southern suburb of Hyderabad — said they would vote the TRS.

As undergraduate students they never missed a public lecture by Kodandaram.

“I feel sad that Kodand Sir is opposing the TRS. I am still in two minds over whether to go against what he says, but I will vote the TRS as it has performed better than any other party here. All the promises can’t be fulfilled within four years, but they have tried to improve every aspect of our lives,” said Prasad.

“The government gives women monetary and medical grants after delivery, and funds for marriages. The TRS is after all our local party, the Congress and the TDP are not,” Kavitha said.

The Osmania University Joint Action Committee for statehood, which preceded the Telangana Joint Action Committee, has now split into several factions — most of whom are campaigning across the state for the Prajakutami alliance. Arunank Latha, secretary of the Democratic Students Union that is part of one such faction, said: “Whoever wins, anyhow they are going to implement World Bank policies. But the TRS is a feudal party. It is full of arrogant feudal landlords….”