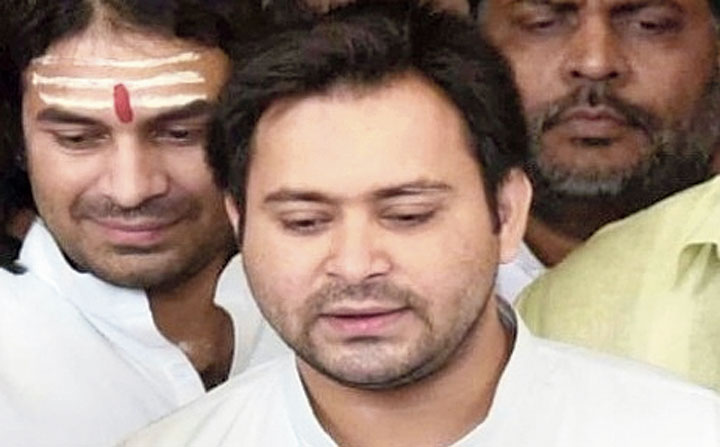 Tejashwi Prasad Yadav, the RJD heir apparent and Lalu Prasad’s younger son, is claimed to have expressed his wish to resign as the leader of the Opposition in the Bihar Assembly, taking responsibility for the party’s Lok Sabha poll debacle.

The RJD legislature party, leaders said, has rejected the purported offer and its MLAs have threatened to resign if he did so.

“Tejashwi has offered to resign from the post of the leader of the Opposition in the Assembly as he holds himself responsible for the party’s loss in the Lok Sabha elections. However, our legislature party has rejected it and said that all the MLAs will resign if he does so,” a senior RJD leader told The Telegraph.

The RJD, with 79 MLAs, is the single-largest party in the 243-member House. However, it failed to win any seat in the Lok Sabha elections.

Tejashwi, who attended the Assembly session on Thursday after a prolonged absence, parried questions on the claim that he had offered to quit as leader of the Opposition. “Resignation is old news,” he said.

RJD MLA Bhai Virendra, who has been with the party since its inception in 1997, said the leadership first got to know about Tejashwi’s decision on May 28, “the day a meeting was called to discuss the reasons behind the poor performance in the polls”.

“It sent shockwaves among us as he is a young and dynamic leader. All of us immediately said that we too would resign and quelled his move,” Virendra said.

Tejashwi, 29, had disappeared from the political scene after that meeting. Walking with a limp, Tejashwi spoke to journalists about his disappearance. “I was in Delhi, getting treated for ligament tear in my left leg. I had to undergo a small surgery for it,” he said.

Tejashwi said he had suffered the injury during his days as a cricketer and that this was the main reason why he quit the game. “The injury aggravated during the Lok Sabha poll campaign. I was suffering from searing pain throughout the campaign,” he said.

The RJD leader rubbished claims that he had been visiting foreign countries during his absence. “I do not have my passport with me. How could I have gone outside the country?”

Sources said Tejashwi had surrendered his passport in one of the several disproportionate assets cases filed against him.

“Nitish Kumar has accepted in an affidavit filed in the Supreme Court that the posts of 47 per cent doctors, 71 per cent nurses, 62 per cent lab technicians and 48 per cent pharmacists are lying vacant during his alleged government of good governance. The chief minister should tell who is responsible for this and why the youths are not getting jobs,” Tejashwi tweeted.

RJD ally Congress said Tejashwi should follow in the footsteps of its president Rahul Gandhi, and take responsibility for the defeat and put in his papers.

“Tejashwi should emulate our party president Rahul Gandhi. He should take the moral responsibility of the defeat of his party in the Lok Sabha polls and tender his resignation from the post of the leader of the Opposition in the Assembly,” Congress MLA Rajesh Kumar said.