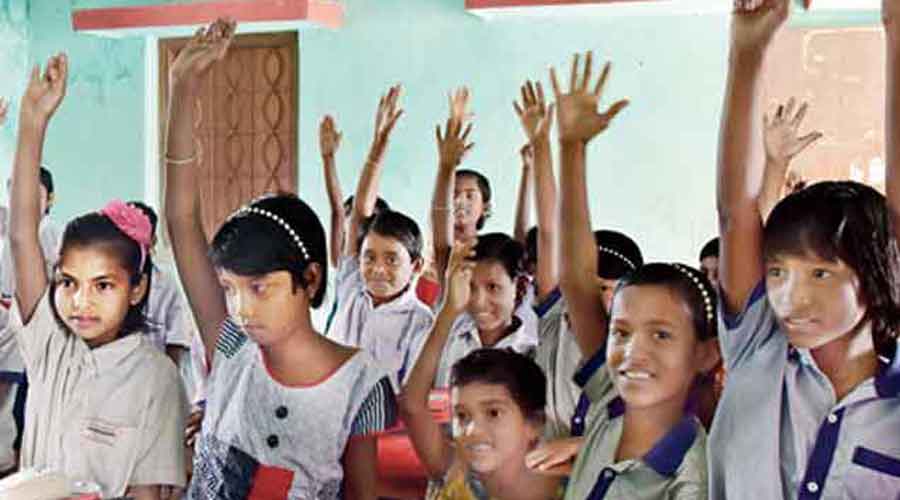 The government of M.K. Stalin has now altered the scheme to remove the free gold component and replace the one-time cash incentive with a monthly stipend for each girl child in a state-run school from Class VI to XII.
File photo
M.R. Venkatesh   |   Chennai   |   Published 27.03.22, 02:27 AM

Education is worth its weight in gold.

The Tamil Nadu government has modified a decades-old scheme to educate the girl child that had ironically reinforced the stereotype that marriage was the be all and end all of a woman’s life.

The Moovalur Ramamirtham Ammaiyar Memorial Marriage Assistance Scheme offered in addition to a one-time cash incentive 8 grams of free 22-carat gold to each beneficiary from an impoverished family for her thaali, or mangal sutra.

The government of M.K. Stalin has now altered the scheme to remove the free gold component and replace the one-time cash incentive with a monthly stipend for each girl child in a state-run school from Class VI to XII.

The word “marriage” in the name of the scheme has been changed to “ higher education”. The family income cut-off of Rs 72,000 a year has been done away with and all girls in these classes in government schools have been made eligible to improve the state’s poor higher education enrolment rate among girls.

The government has cited bogus beneficiaries and huge backlogs as the reasons for reworking the scheme, but the amendment seems also to be a nod to the emancipating quality of education that would help a woman stand on her own feet instead of pandering to hackneyed and restrictive mindsets.

The scheme was set up in the memory of Moovalur Ramamirtham Ammal, a champion of women’s rights who had fought to abolish the Devadasi system in the erstwhile Madras Presidency in the 1930s and 1940s as an activist of the Periyar-led Dravidian Movement. Under the Devadasi system, a girl used to be married or dedicated to a temple, temple priest or a local deity before she attained puberty.

The scheme, launched by Stalin’s father M. Karunanidhi as chief minister in 1989, initially offered a cash incentive of Rs 5,000 to every girl from a poor family passing Class VIII. The amount was increased to Rs 25,000 by the DMK government in 2009 while AIADMK leader Jayalalithaa added the gold component in 2011. At first 4 grams of free gold was offered but the amount was increased to 8 grams after she returned to power in 2016.

The Moovalur Ramamirtham Ammaiyar Memorial Marriage Assistance Scheme, which was restricted to one girl per family, carried a cash aid of Rs 25,000 for each beneficiary who completed Class X or XII, and Rs 50,000 for degree and diploma-holders, besides eight grams of 22-carat gold to make the mangal sutra. These one-time benefits were given once a girl attained the age of 18 and had not been married off before that. For tribal girls, those completing Class V were eligible for the incentives after turning 18.

Tamil Nadu finance minister Dr Palanivel Thiaga Rajan, a former Wall Street banker, has announced that the scheme had been “remoulded” to make it more meaningful and efficient in promoting higher education among girls.

In the first full-fledged budget (2022-23) of the DMK government presented in the Assembly on Friday, Thiaga Rajan said the Moovalur Ramamirtham Ammaiyar Marriage Assistance Scheme had been launched by Karunanidhi as chief minister in 1989 to promote the education of girls from poor families and also help their parents get them married.

However, “in line with the changing times, it is necessary to remould this scheme to promote higher education among girls belonging to economically weaker sections”, Thiaga Rajan said. With this aim the project has been re-purposed as the Moovalur Ramamirtham Ammaiyar Higher Education Assistance Scheme.

The enrolment ratio of girl students from government schools in higher education “is very low” in Tamil Nadu, the minister pointed out.

He said that under the modified scheme, all girl students between Class VI and Class XII in government schools would each be given Rs 1,000 per month, which would be directly transferred to their bank accounts. The incentive will continue if a beneficiary chooses to go for undergraduate, diploma or ITI education. This cash transfer will be in addition to other scholarships girl students receive for higher education.

Thiaga Rajan said that under the refashioned scheme nearly six lakh girl students would potentially benefit every year. The state government has allotted Rs 698 crore for the scheme in the budget. The minister said the scheme would encourage more girls to pursue higher education and also skill them for jobs.

S. Narayan, a former economic administrator at both the Centre and in the state and now a member of the chief minister’s economic advisory council that includes Nobel laureate Esther Dufflo, former RBI governor Raghuram Rajan and development economist Jean Drèze, said the modification of the scheme was overdue.

Narayan told The Telegraph that with more and more women enrolling themselves in the workforce in Tamil Nadu in recent years, aspirations had increased. Tamil Nadu has the highest percentage of women’s participation in the urban workforce — 21.80 against the national average of 15.40.

He said it was only appropriate that women be given more incentives for higher education to ensure better livelihood outcomes. On the contrary, an assistance scheme that ended with marriage meant the role of a woman was largely seen as limited to being a homemaker.

“This modified scheme is revolutionary as it will encourage girls to study more and become economically independent,” Narayan said.

The “gold-for-thaali” scheme was a one-time offer and there were no long-term benefits for girls, Narayan. In many poor families, the gold used to be taken away from the girls for other purposes, he said.

Narayan also referred to the interminable delay in receiving the benefits, which defeated the scheme’s purpose. Each district would send a long list of beneficiaries but in recent years not even the scaled-down target of offering the grants to one lakh girls a year was being fulfilled, Narayan said.

Thiaga Rajan clarified in the budget speech that four other marriage assistance schemes — for daughters of widows, those opting for inter-caste marriage, widows wanting to remarry and a project named after Mother Teresa that helps orphaned girls — would “continue to be implemented without any change”.

Stalin, the chief minister, had told the Assembly on Monday that only 24.5 per cent of those receiving help under the Moovalur Ramamirtham Ammaiyar Marriage Assistance Scheme were “eligible beneficiaries”. He also pointed to the huge backlog of applications for the receipt of benefits that had piled up during the previous AIADMK regime.

Over three lakh girls have had to wait for over two years, ironically after their wedding, to get the free gold meant for their mangal sutra, and the cash incentive.

Under the scheme, a beneficiary had to apply at least 40 days before her wedding, barring exceptional situations, with all documents including the invitation card.

When the DMK government took over on May 7, 2021, social welfare minister Geetha Jeevan had said her department was shocked to find that no application had been processed after March 2019. As many as 3,34,913 applications, submitted between 2019 and 2021, had been gathering dust. In the 2021-22 interim budget, Stalin had allocated Rs 232 crore to clear the backlog.