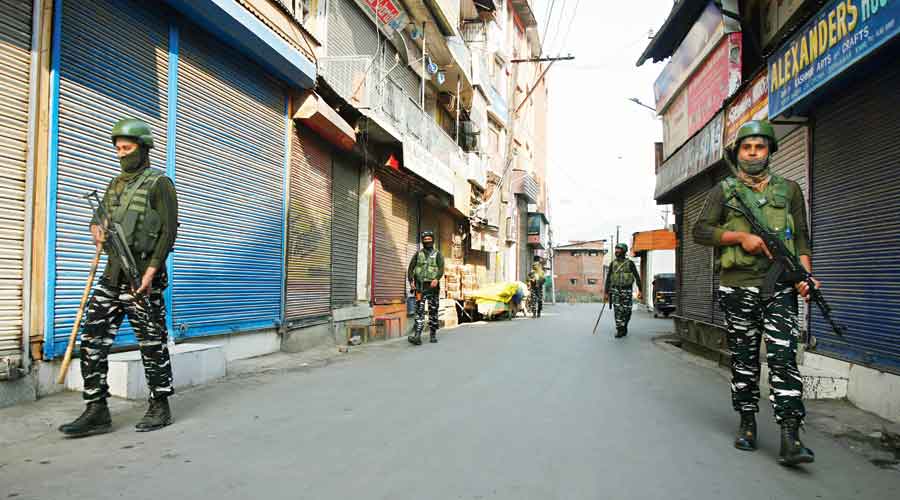 The Centre’s purported proposal to ban both factions of Hurriyat seems to have sent hardline separatist Syed Ali Geelani camp into a tizzy as it removed the signboard at the group’s head office here over fears of government seizure while moderates tried to put up a brave face and said repression could not alter the sentiments of Kashmiris.

Some media reports from Delhi quoting government sources claim that both hardline and moderate factions of the Hurriyat may be banned.

The proposed ban itself is corollary to the arrest of some separatists last week for allegedly selling MBBS seats allocated to separatist groups in Pakistan to Kashmiri students. Police claim the money was used for funding militancy.

The admissions in Pakistan are mostly granted on recommendations of the separatists who at times allegedly sell them to meet their expenses. The fresh crackdown on separatists on MBBS seats, it is believed, has been timed to prepare the ground for Hurriyat ban.

Eyewitnesses said Geelani’s family removed the signboard of Tehreek e Hurriyat, a separatist group founded by him, and Milli Trust (a charity) on Sunday evening from his Hyderpora residence. Both offices were operating from a building within Geelani’s home compound.

Family sources said both Tehreek and Milli trust offices were non-operational since the scrapping of the special status of Jammu and Kashmir in 2019.

Geelani is believed to be ailing and the family has given no explanation for the removal of the signboards. It appears that the Geelani family took down the signboards in anticipation of the ban and to prevent the government from taking over its possession.

The property can still be seized, but the government has largely spared the Geelani family after the latter’s silence.

Last year, Geelani quit Hurriyat after a feud with his colleagues who he accused of “nepotism and corruption”, although it is widely believed he faced opposition within the camp for choosing silence over the 2019 developments for fear of his family being hounded.

In 2014, Geelani had floated Milli Trust and claimed to have donated his house to it. His son Dr Naeem uz Zaffar and son-in-law Altaf Ahmad Shah were among its trustees. The decision earned him a snub from separatist Jamaat-e-Islami, his parent organisation, which claimed ownership of the house and said Geelani was only using it for residential and official purposes.

Eyewitnesses said the signboard of the moderate Hurriyat faction at its Rajbagh office was still intact on Monday.

The faction headed by Mirwaiz Umar Farooq hit out at Centre, vowing to “represent those aspirations (of Kashmiris) and seek their fulfilment through its principled stand of dialogue and deliberations among the stakeholders of the conflict”.

“(Hurriyat) reiterated that the sentiments of the people of J&K with regard to the resolution of the Kashmir dispute in a peaceful and fair manner cannot be altered despite repression, legal tactics or propaganda,” a spokesman said.

Mirwaiz has been under house arrest since August 5, 2019.

The spokesman said it completely rejected and denounced the “propaganda being promoted in print and other media by authorities” that its leadership recommended aspiring Kashmiri candidates to medical and technical colleges in Pakistan and sold these seats for money.

“APHC (All Parties Hurriyat Conference) wants to put on record that this is completely unfounded, and can be verified by those students or parents whom they have recommended, many among them being from among economically weak sections,” he said.

The spokesman said Mirwaiz had all along been giving recommendation letters to students who come to him asking for it in colleges and universities in Saudi Arabia, Malaysia, Turkey and elsewhere. Pakistan was not mentioned.

Lone out of J&K alliance