Subramanian Swamy, who has built up a reputation for tormenting movers and shakers, has questioned the choice of the name "Republic" for the television channel proposed to be launched by Arnab Goswami, the anchor known for his take-no-prisoner style. 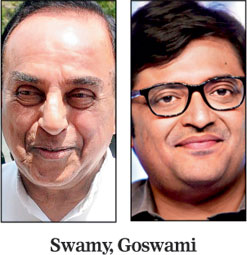 New Delhi, Jan. 25: Subramanian Swamy, who has built up a reputation for tormenting movers and shakers, has questioned the choice of the name "Republic" for the television channel proposed to be launched by Arnab Goswami, the anchor known for his take-no-prisoner style.

Swamy has written to the information and broadcasting ministry that the name would breach the provisions of the Emblems and Names (Prevention of Improper Use) Act, 1950.

The act seeks to "prevent the improper use of certain emblems and names for professional and commercial purposes".

In his letter dated January 13, Swamy has drawn attention of the ministry to Section 6 of the Schedule accompanying the statute.

"As per the schedule accompanying the statute, under item 6, there is an express prohibition from using the phrase, 'Republic'. Hence the grant of licence to a news channel to broadcast under the name of 'Republic' will be contrary to law and a direct breach" of the act, Swamy said in the letter.

In the schedule, item 6 covers "the name, emblem or official seal of the President, Governor, Sadar-i-Riyasat or Republic or Union of India".

Swamy has clarified on Twitter that only the use of "Republic" as a stand-alone word is barred by the law. "Except Republic, nothing else, including The Republic, is barred by law. Arnab needs to be taught truth and law. He is ignorant."

By this yardstick, brands like Banana Republic, which is planning an Indian foray, and malls like Fun Republic (Calcutta has a liquor store called Republic Stores) appear to be in the clear.

When the issue raised by Swamy was put to I&B minister M. Venkaiah Naidu today, he said: "I will see the application of the channel before deciding."

Ministry officials said the channel's application was still under consideration at the bureaucratic level.

"Swamy's letter, too, is yet to reach the minister," an official said.

Asked for a response to the controversy stirred by the Rajya Sabha member, Samyabrata Ray Goswami, who co-owns along with husband Arnab the company that will launch the channel, said: "We have no comment."

The company owned by the Goswamis is called SARG Media Holding Pvt Ltd. "We have decided upon a date, but we do not want to disclose it yet," Samyabrata said in response to a question.

Arnab Goswami, who signed out of TimesNow in November, ended the suspense on his future plans on January 7. A Twitter handle called "Republic" flagged his return to the micro-blogging site with his signature "the nation wants to know".

Stating that "we are a step closer to you", Republic tweeted: "The nation wants to know! We are now live on social. Until we hit your screens, track the revolution here! #RepublicOnSocial."

The very second tweet from the Republic handle had quoted Arnab Goswami as saying: "We will together raise our voice, shout out loud, disrupt the fence-sitters...."