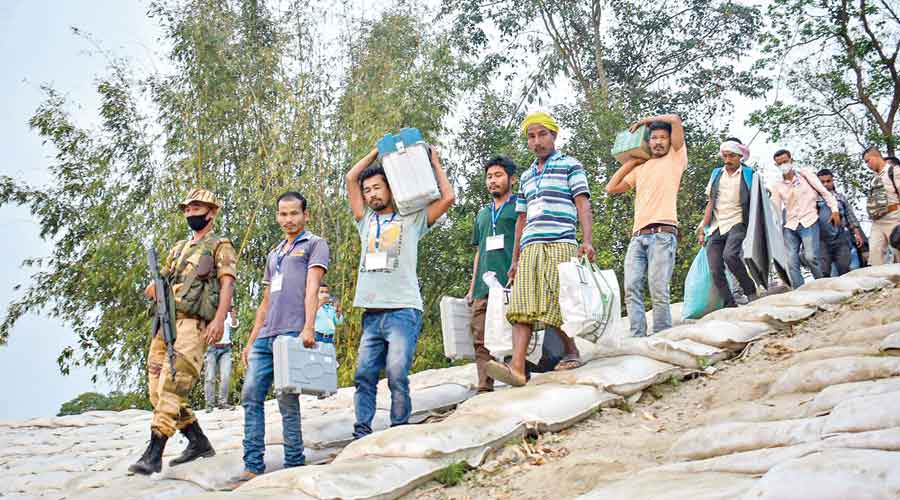 The Supreme Court on Friday refused to stay the release of electoral bonds for the Assembly polls in Bengal, Assam, Kerala, Tamil Nadu and Puducherry, holding that there was no illegality or anonymity in the periodical issuance of these documents during elections as they carried adequate safeguards suggested by the Reserve Bank of India and the Election Commission.

“We do not know at this stage as to how far the allegation that under the scheme there would be complete anonymity in the financing of political parties by corporate houses, both in India and abroad, is sustainable,” the bench of Chief Justice of India S.A. Bobde and Justices A.S. Bopanna and V. Ramasubramanian said.

“If the purchase of the bonds as well as their encashment could happen only through banking channels and if purchase of bonds are allowed only to customers who fulfill KYC norms, the information about the purchaser will certainly be available with the SBI which alone is authorised to issue and encash the bonds as per the scheme,” the court added.

The bench dismissed an application filed by the Association for Democratic Rights seeking a stay on the issuance of electoral bonds from April 1 as according to the NGO it would lead to massive money laundering by some political parties as the identities of the donors and purchasers are “anonymous”.

Rejecting the argument, the court said any expenditure incurred by anyone in purchasing the bonds through banking channels would have to be mentioned as an expenditure in his book of accounts.

The trial balance, cash flow statement, profit and loss account and balance sheet of companies that purchase electoral bonds will have to necessarily reflect the amount spent, the court said.

The bench said the apprehension that foreign corporate houses might buy the bonds and attempt to influence the electoral process in India was also misconceived.

“Under Clause 3 of the scheme, the bonds may be purchased only by a person who is a citizen of India or incorporated or established in India,” the court pointed out.

“Therefore, in the light of the fact that the scheme was introduced on 2.1.2018; that the bonds are released at periodical intervals in January, April, July and October of every year… in the years 2018, 2019 and 2020 without any impediment and that certain safeguards have already been provided by this court in its interim order dated 12.4.2019, we do not see any justification for the grant of stay at this stage. Hence both the applications for stay are dismissed…,” the bench said.

The court noted that the NGO had been repeatedly filing petitions on poll bonds since 2017. The bench said that on April 12, 2019, too, it had passed interim directions to the political parties to file before the EC details of the donations received through such bonds.

“Therefore, once this court has passed an order on 12.4.2019 directing some interim arrangement, thereafter applications for the same interim relief cannot be made every time the window for the purchase under the scheme is opened,” it said.

The court also rejected the argument that the RBI and the EC had objections to the issuance of bonds and the government had further incorporated certain recommendations made by the RBI to prevent misuse.

“Despite the fact that the scheme provides anonymity, the scheme is intended to ensure that everything happens only through banking channels. While the identity of the purchaser of the bond is withheld, it is ensured that unidentified/unidentifiable persons cannot purchase the bonds and give it to the political parties,” the court said.

“Under Clause 7 of the scheme, buyers have to apply in the prescribed form, either physically or online, disclosing the particulars specified therein. A non­KYC-compliant application or an application not meeting the requirements of the scheme shall be rejected,” the bench said, pointing out that the scheme had sufficient safeguards to avoid possible misuse.