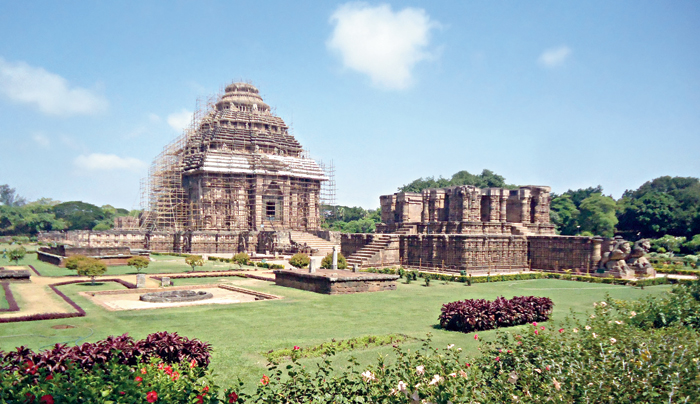 The iron scaffoldings had been installed for periodical repairs and to support the stones that are part of the temple’s structure
File picture
Subhashish Mohanty   |   Bhubaneswar   |   Published 04.09.19, 09:58 PM

The Archaeological Survey of India (ASI) has decided to remove the iron scaffoldings around the Sun Temple in Konark that have over the decades encircled the 13th-century shrine and obscured its architectural beauty.

The decision to remove the scaffoldings, which began to be installed in 1992 and covered the entire temple by 2011, was taken on the basis of a recommendation of the Central Building Research Institute (CBRI), Roorkee. An ASI team inspected the structure on Tuesday.

The iron scaffoldings had been installed for periodical repairs and to support the stones that are part of the temple’s structure. ASI officials said such support was no longer needed and that an alternative plan would be chalked out to maintain the ancient temple.

Mallik said the scaffoldings were no longer needed.

After Cyclone Fani, the ASI had come under severe criticism for not removing the iron scaffoldings around the 12th-century Shree Jagannath Temple. The scaffoldings fell on the ground and caused extensive damage to several shrines inside the temple.

“It has not yet been decided whether the sand inside the sanctum sanctorum of the temple will be removed. The CBRI has submitted reports and we are examining its recommendations,” he said.

The British had between 1900 and 1903 filled up the sanctum sanctorum with sand to prevent the Sun Temple from collapsing.

Officials said the CBRI had done a 3-D laser scan of the Sun Temple using a ground-penetrating radar. It had inserted five robotic cameras into the temple from four sides through its walls and also from the top to get a clear picture of the status of the structure.

The Sun Temple is also known as Black Pagoda because its great tower appears black.

Mallik said: “We will initiate steps to make people aware of the untold story of Konark. Steps are being taken to show the people rare photos of the Sun Temple dating back to the 1860s.”

The Sun Temple received the World Heritage tag in 1984.

“Our chemical wing and scientists from elsewhere are taking steps for the conservation of the temple. They are providing chemical treatment to the structure to save it from saline winds. Now, there is no sign of decaying. Besides, the casuarina plantation near Konark and the massive plantations on the Chandrabhaga coast help fight the problem of saline winds. It has also helped to save the structure from sand blasting,” Mallik said.

The Konark Surakshya Samiti, which fights for the conservation of the temple, has welcomed the decision to remove the scaffoldings.