Stop lowering dignity of PM's post by talking about 'black magic': Rahul hits back at Modi 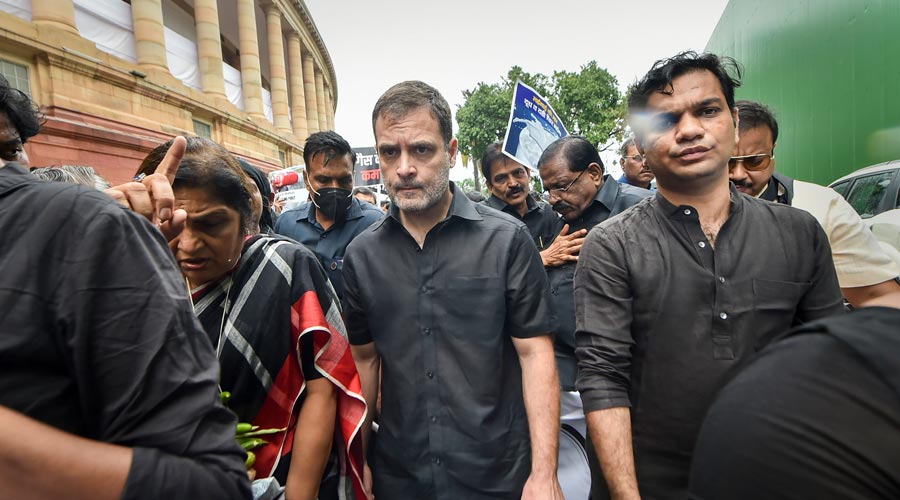 Congress leader Rahul Gandhi on Thursday hit out at Prime Minister Narendra Modi over his "black magic" remark, saying he must "stop lowering the dignity" of the PM's post by talking about such superstitious things.

Gandhi's attack came a day after Prime Minister Modi lashed out at the Congress for wearing black dresses on August 5 in protest against price rise, saying those who believe in "kala jadu" will never be able to win the trust of the people again.

Attacking him, Gandhi asked if the prime minister was unable to see inflation or unemployment in the country.

"Stop lowering the dignity of the prime minister's post and misleading the country by talking about superstitious things like 'black magic' to hide your black deeds, prime minister-ji," Gandhi said in a tweet in Hindi.

"You will have to give answers on people's issues," the former Congress chief added.

"The PM said that those who wear black clothes will never gain public trust. E V R Periyar wore a black shirt all his life and earned the eternal trust of the people of Tamil Nadu (except those who believed in Sanatana Dharma)," he tweeted.

Addressing a function in Panipat via video-conferencing to dedicate the second-generation ethanol plant worth Rs 900 crore, Modi had said, "On August 5, we saw how some people tried to spread 'black magic'. These people think that by wearing black clothes they can end their despondency."

"But they do not know that by engaging in witchcraft, black magic and superstition, they cannot earn the trust of people again," Modi had said.

The Congress hit back at the prime minister over his 'kala jadu'(black magic) remark, saying while the country wants him to talk about their problems but "jumlajeevi" keeps saying just anything.