Stench of Kargil: Pilot's capture by Pakistan brings back memories of Nachiketa, Kalia and Ahuja

In 1999, Flight Lieutenant Nachiketa was in Pakistani custody for eight days, another pilot was shot dead 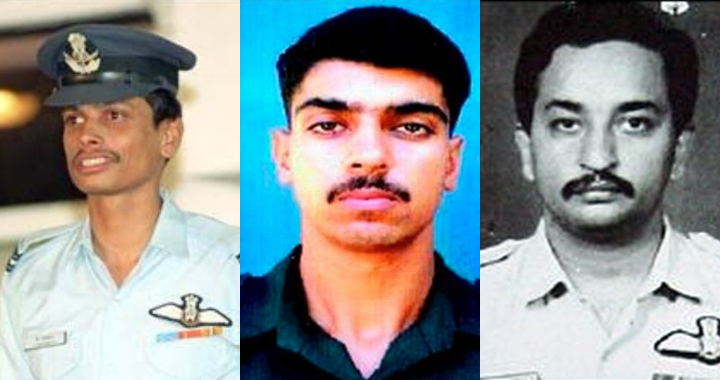 (Left) Fl Lt. K. Nachiketa, Captain Saurabh Kalia and Sqaudron Leader Ajay Ahuja were captured by Pakistan in 1999 during the Kargil conflict. Nachiketa was released by Pakistan after eight days in captivity. Kalia and Ahuja were killed by the Pakistanis.
The Telegraph   |   New Delhi   |   Published 27.02.19, 01:24 PM

The Pakistan military has confirmed that an Indian pilot is in their custody, bringing back memories of Kargil when Flight Lieutenant K. Nachiketa had been captured by the Pakistani side.

In June 1999, at the time of the conflict, the Indian Air Force sent Nachiketa to destroy high-altitude Pakistani posts in Kargil. He was flying a MIG-27.

The captured Indian pilot in Pakistani custody now has been identified by the military there as Wing Commander Abhinandan. He was flying a MIG-21 Bison.

According to the Indian foreign ministry he had shot down a Pakistani jet that had crossed the LoC but in the aerial combat, the MIG went down as did the Pakistani jet.

In 1999, Nachiketa had locked on a target and fired at which point his jet’s engine flamed out and went dead.

Nachiketa ejected to avoid crashing into snow-clad mountains before the engine could come back to power. He landed on snow and was soon surrounded by Pakistani soldiers.

Armed with a handgun, he failed to counter their assault rifles and was captured and tortured by Pakistani Northern Light soldiers.

Some accounts say he escaped death because a Pakistani officer intervened and stopped soldiers from beating him.

The same day, Nachiketa's colleague Squadron Leader Ajay Ahuja was flying a MiG-21 that was shot down by Pakistan. Ahuja was reportedly shot dead when he hit the ground on the Pakistani side in a parachute. India accused Pakistan of killing Ahuja in violation of the Geneva Convention.

Captain Saurabh Kalia, an Indian Army officer, was captured by Pakistan and tortured to death.

In May 1999, India’s Air Vice-Marshal S.K. Malik had called Ahuja’s killing a cold-blooded murder and an act of cowardice by the Pakistan Army. Citing a post-mortem report Malik had said that Ahuja was shot twice, in the head and chest from close range.

Ahuja, who was from Kota in Rajasthan, was commissioned as a fighter pilot in 1985. He was cremated on May 29 while Nachiketa was still in a prison in Pakistan. Initially, he was in an undisclosed location but was later taken to Skardu.

The Pakistan Army produced the Indian pilot for the international media to show he was alive. Nachiketa later said in interviews in India that he was tortured in captivity.

After successful backdoor negotiations he was handed over to the International Committee of the Red Cross and came back to India as a hero on June 3.