Congress MPs, backed by the DMK, protested in the well of the Lok Sabha 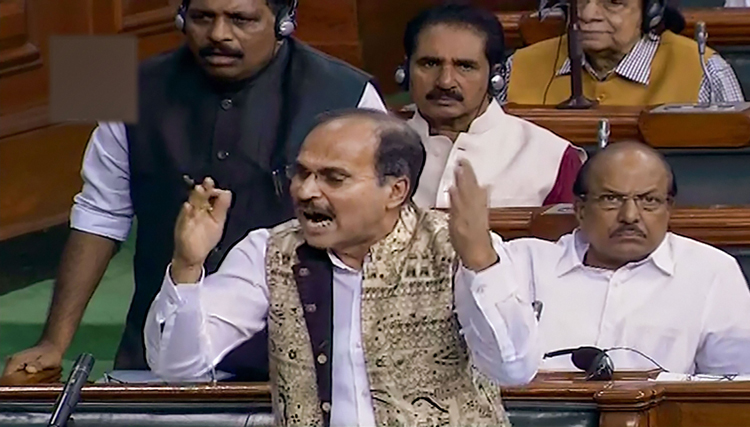 The Congress on Tuesday protested against the government’s decision to withdraw the Special Protection Group cover for Sonia Gandhi, Rahul Gandhi and Priyanka Gandhi Vadra, claiming their lives had been endangered and alleging a conspiracy behind the move.

Congress MPs, backed by the DMK, protested in the well of the Lok Sabha, demanded a statement from Prime Minister Narendra Modi and home minister Amit Shah and walked out when the Speaker refused to allow party leader Adhir Ranjan Chowdhury to raise the issue in detail.

Adhir, his party’s leader in the House, had given notice for an adjournment motion, which was denied, and then tried to raise the issue during the zero hour. “Sonia Gandhiji and Rahul Gandhiji are not normal protectees. Their SPG cover had never been withdrawn, not even during NDA governments in the past,” Adhir said. “There is a ‘saazis’ (conspiracy).”

The Congress leader, who spoke in Hindi, kept repeating the words, “jaan ko khatra hai (there is a threat to their lives)”. Party chief Sonia and Rahul were not present in the House when the issue was brought up. Speaker Om Birla objected, pointing out that Adhir’s zero hour notice was on another subject and that he had raised the withdrawal of the SPG cover on Monday too.

The government withdrew the SPG cover on November 8, with officials saying there was no “direct threat to the Gandhis”. The 200 SPG guards who protected each of the Gandhis have been replaced with around 40 CRPF personnel for each. The family had been under SPG cover since the assassination of former Prime Minister Rajiv Gandhi in 1991.

Earlier, through the question hour, the Congress, DMK and some other Opposition members remained in the well and raised slogans against the government, demanding a clarification from the Prime Minister and the home minister.

While Modi was not seen in the House, Shah was there for some time before he left.

After the Congress had walked out, DMK leader T.R. Baalu raised the withdrawal of the SPG cover and managed to speak a few sentences before the Speaker intervened.

Birla told the DMK MP he couldn’t be allowed to raise the matter as his notice too was on some other subject. The DMK then walked out of the House in protest.

The Speaker later sought to indirectly highlight Rahul’s absence from the House. “His (Rahul’s) question was listed for the Question Hour and I wanted to give him a chance had he been present,” Birla said during zero hour.

That was after Congress MP Kodikunil Suresh had stood up where Rahul sits while trying to raise a matter related to Kerala.

Rahul’s name flashed on the screen and Birla intervened. “You (Suresh) are speaking from your leader’s seat since he is absent,” the Speaker said with a smile.

Suresh immediately moved towards his seat, just beside Rahul’s.

The question that Rahul had wanted to raise was about the Pradhan Mantri Gram Sadak Yojana (Prime Minister’s rural road scheme) for Kerala. But the Congress leader would not have got the chance to ask his question even if he had been present in the House.

By the time the question hour got over, the House could take only up to question No. 25. Rahul’s question was No. 28 on the list.