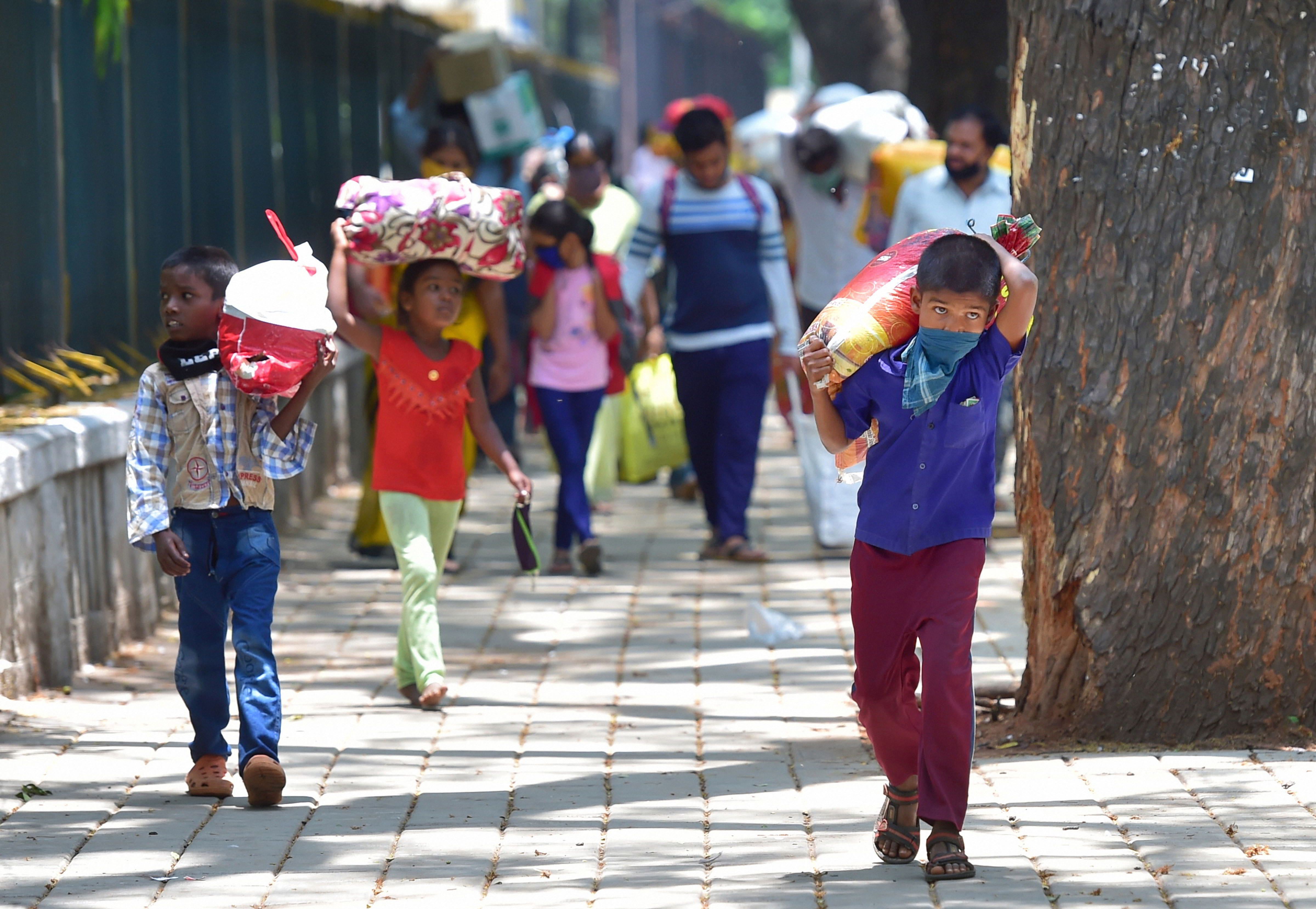 Children of migrant workers arrive at the District Collectors office, after the government allowed people to travel to their respective destinations with certain conditions amid the coronavirus pandemic, in Bengaluru, Friday, May 1, 2020.
PTI
PTI   |   Hyderabad   |   Published 01.05.20, 01:02 PM

Following the order, the railways said it will run “Shramik Special” trains from Labour Day on Friday for those who are stranded due to the lockdown. These trains, the railways announced, would travel from Lingampally to Hatia, Nasik to Lucknow, Aluva to Bhubaneswar, Nasik to Bhopal, Jaipur to Patna and Kota to Hatia.

Earlier in the day, the national transporter ran its first special train to ferry 1,200 stranded migrants from Lingampally in Telangana to Hatia in Jharkhand since its services were suspended due to the coronavirus lockdown.

The special non-stop train left Telangana at 4.50am and was scheduled to arrive at its destination at 11pm on Friday. The workers are expected to be taken to a quarantine centre.

The migrant workers from neighbouring Sangareddy district, about 50 km from Hyderabad, were brought to the city in buses and allowed to board the 24-coach train, officials said.

However, the railways did not divulge any further details about the operation, which was apparently carried out in a hush-hush manner and caught many by surprise.

No formal announcement was made by the government on the operation of the train while district officials were not reachable despite repeated attempts.

The railways described it as a 'one-off' service while the Telangana government was tight-lipped when asked if more such trains were in the offing.

Exercising the powers conferred under the Disaster Management Act, Union home secretary Ajay Bhalla said the movement of migrant workers, pilgrims, tourists, students and other persons stranded at different places was being allowed by special trains to be operated by the ministry of railways (MoR).

'The MoR will issue detailed guidelines for sale of tickets, and for social distancing and other safety measures to be observed at train stations, platforms and within the trains,' the home secretary said.

Asked about lifting of restrictions on transport movement in Delhi, Mumbai, other cities and green zones from Monday, Srivastava said one should wait for the fresh guidelines from the MHA.

The Union ministry of home affairs (MHA) on Friday allowed the use of trains for ferrying people stranded due to the nationwide lockdown, an official said hours after a special train with over 1,200 migrant labourers on board was flagged off from Telangana early on Friday morning.

'States and the railway board will make the necessary arrangements for the same,' she said.

Some of the workers who boarded the special service were working at IIT, Hyderabad, located in Sangareddy, which witnessed protests by construction labourers, who were allegedly denied payment. The labourers resorted to stone pelting, demanding that they be sent back home.

Three policemen including a sub-inspector were injured and a police vehicle damaged in the incident.

Telangana government officials said that due protocols for the safe journey of the workers have been followed.

The railways issued a statement for the same: 'Today (Friday) morning a one-off special train was run from Lingampalli to Hatia on request of the state government of Telangana and as per the directions of ministry of railways.'

All necessary precautions such as prior screening of passengers, maintaining social distancing at station and in the train were followed, it said.

A spokesperson for the south central railway, which is running the train service, said all passengers were thermal screened at the station, masks were made mandatory and on-board food arrangements have been made as the train will have no halts.

As part of social distancing measures, it has allowed only 54 passengers per coach as against the capacity 72. In coupes, six passengers have been allowed instead of eight, the spokesperson said.

Volunteers distribute food to migrants walking on the Mumbai-Nashik highway to reach their native places during the nationwide lockdown, in wake of the coronavirus pandemic, in Thane, Friday, May 1, 2020.
PTI

Movement of migrant workers, pilgrims, tourists, students & other persons, stranded at different places, is also allowed by #SpecialTrains to be operated by @RailMinIndia. MoR to designate nodal officer(s) for coordinating with States/ UTs for their movement#lockdown #Covid_19 pic.twitter.com/UvEvDH1Ibj