'When a govt makes a mistake that harms people, it is not only permissible to speak up, it is actually necessary' 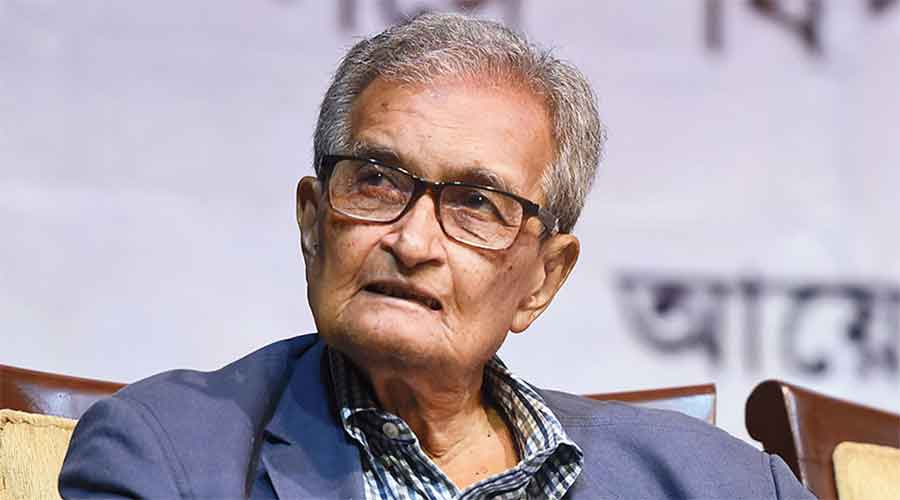 Nobel laureate Amartya Sen has voiced anguish over the "shrinking space" for debate and dissent in the country where people are jailed without trial through the arbitrarily imposed charge of sedition.

The BJP, which is often the butt of criticism by the economist, rubbished the accusation as baseless.

In an e-mail interview with PTI, the 87-year-old Harvard University professor backed the farmers' protests against three agricultural laws, insisting there was a "strong case" for a substantial review of the legislation.

"A person whom the government does not like may be declared by the government to be a terrorist and imprisoned. Many opportunities of public protest and free discussion have been curtailed or closed.

"The space for dissent and debate is shrinking. People are jailed without trial through arbitrarily imposed charge of sedition," he alleged.

The celebrated economist deplored that young activists like Kanhaiya Kumar, Shehla Rashid and Umar Khalid were often treated as enemies.

"Rather than treating young and visionary leaders, committed to peaceful and non-violent ways like Kanhaiya or Khalid or Shehla Rashid as political assets who should be given the opportunity to pursue their pro-poor initiatives in a peaceful way they are often treated as enemies to be suppressed," he claimed.

"The allegations are baseless. If he wants to see what intolerance is then he should visit West Bengal where none of the opposition parties has the democratic right to conduct their programmes," Ghosh said.

When asked for his views about the BJP-led government that were often interpreted as pro-opposition, Sen said," When a government makes a mistake that harms people, it is not only permissible to speak up, it is actually necessary. Democracy demands that!"

Sen said there is a strong case for a substantial review of the three contentious farm laws which have sparked protests by agriculturists.

"There is certainly a strong case for revising the legislations substantially. But the first necessity is a proper discussion rather than making allegedly big concessions that actually make very little real concession," said Sen.

Sen's comments come in the backdrop of thousands of farmers protesting at Delhi's borders for a month demanding repeal of three agricultural laws enacted in September and a legal guarantee on minimum support price.

While the government insists these laws constitute major reforms to help farmers, protesting unions have maintained these will leave them at the mercy of big corporates by weakening mandis and the MSP regime.

Responding to Sen's position on farm protests, BJP general secretary Kailash Vijayvargiya said the government has made all efforts to address the issues and concerns raised by the farmers' unions.

Sen also said there are big gaps in the treatment of disadvantaged communities in India.

"Perhaps the biggest lacuna is a combination of policies that have led to such a terrible expansion of child undernourishment. To reverse that, we need different policies in many distinct fronts."

On the country's efforts in battling Covid-19, Sen said India was right to see the necessity of physical distancing but was wrong in imposing the lockdown with almost no notice.

"It was also mistaken in ignoring the need for poor labourers to earn an income," he said, referring to the lockdown that rendered crores of people jobless and triggered a massive migration of labourers, arguably the biggest since Partition.

Stressing on the need for "more intelligent reasoning and a humane touch" in implementing the COVID-19 strategy, Sen said India had got some ideas right, but "messed up" its response by overlooking the country's reality of extensive inequality.

The presence of huge inequality should influence every aspect of India's policymaking, he said.