Advertisement
Home / India / Some from rebel camp might want to return, but forced to stay back: Sena MLA

Some from rebel camp might want to return, but forced to stay back: Sena MLA

'My principles do not allow me to cheat the party. Others who were taken to Gujarat (from Mumbai) might also be having the same feeling' 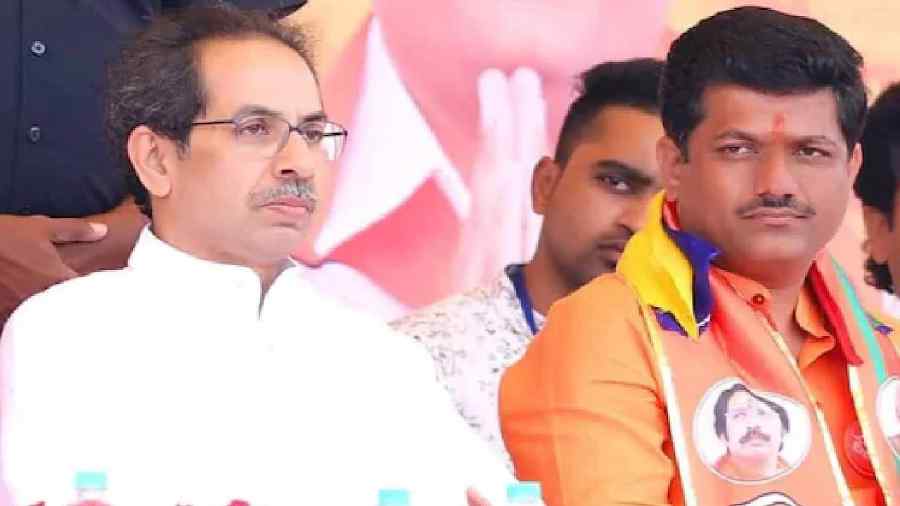 Shiv Sena MLA Kailas Patil, who had escaped from a car carrying rebel legislators to Surat, on Thursday claimed some of those taken to the camp led by Maharashtra minister Eknath Shinde might be wanting to return, but were forced to stay back.

Addressing a press conference in Mumbai, Patil recalled how he walked for some kilometres near the Maharashtra-Gujarat border, then got lift on a two-wheeler and a truck before reaching the Maharashtra chief minister's official residence 'Varsha' here in the wee hours of Tuesday.

Patil said after he cast his vote in Mumbai on June 20 for the Maharashtra Legislative Council polls, he was called to Shinde's bungalow in neighbouring Thane.

The MLA from Osamanabad said he along with some others were taken to Thane mayor's bungalow, where their cars were changed before proceeding further.

"A person from his (Shinde's) staff was with me and we crossed Vasai-Virar (in adjoining Palghar district). I don't know much about the area, but as we passed by the road and reached the (Maharashtra-Gujarat) check post, I realised that I was being taken in a different direction," he said.

"When the cars stopped, the staff member said there was checking going on at the post and told me to take a little walk. I opened the car door and saw there was huge traffic jam," Patil said.

After getting out of the car, the MLA crossed the lane and got on to the road going towards Mumbai, he said, recalling that he also got drenched in the rain at that time.

"I thought those people would come searching for me. I kept walking between trucks for about one km. I requested a motorbike driver for a lift, but he refused. Later, another person helped me and left me at a hotel, three-four km away from the check post. There, I tried to seek help from some truck drivers and private vehicles going towards Mumbai," he said.

Patil said he then called the residence of Chief Minister Uddhav Thackeray and also a Sena MP and conveyed to them that he was returning. His mobile phone battery was low and hence, he could not share with them his location, he said.

"Later, a truck driver from Uttar Pradesh heading towards Mumbai accepted my request and gave me a ride till the Dahisar toll plaza (naka) (an entry point to Mumbai). There, a person came to pick me up," he said.

Patil noted that MLA Nitin Deshmukh also returned from Surat where he was taken along with some rebel MLAs.

"There may be some MLAs who want to return, but are unable to come back due to pressure or other problems," he claimed.

"The Shiv Sena made me a Zilla Parishad member and an MLA. My principles do not allow me to cheat the Shiv Sena. The others who were taken to Gujarat (from Mumbai) might also be having the same feeling," he said.

Patil said after returning to Mumbai, he contacted Shiv Sena's politician from Nanded Balaji Kalyankar and the latter also had a word with CM Thackeray. Later, Kalyankar's phone was switched off, he added.