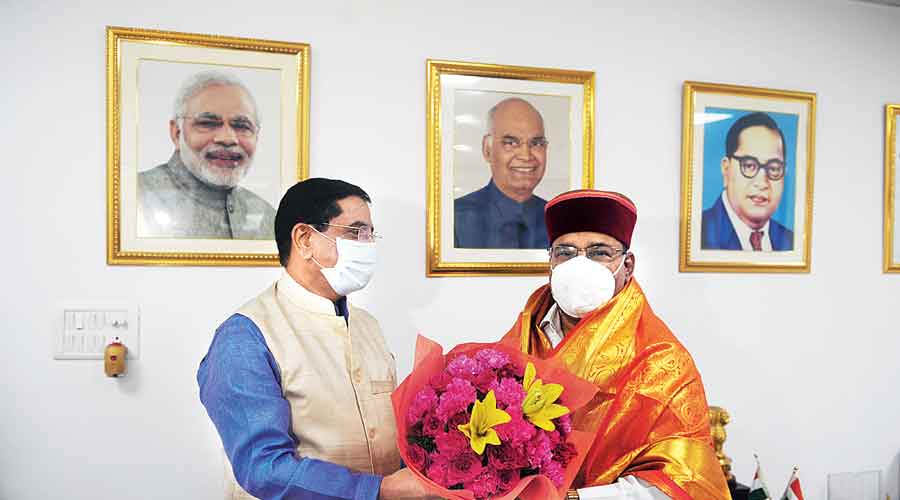 Social justice minister Thawarchand Gehlot at his residence in New Delhi on Tuesday after he was appointed governor of Karnataka
Prem Singh
J.P. Yadav   |   New Delhi   |   Published 07.07.21, 12:51 AM

Social justice minister Thawar Chand Gehlot was appointed Karnataka governor and many leaders said to be nurturing ministerial ambitions made a dash for Delhi on Tuesday, signalling that the first cabinet expansion of the Narendra Modi government’s second term was imminent.

Speculation has been rife about filling up cabinet vacancies and also going for a rejig with sources saying it could be done at 6pm on Wednesday.

Gehlot had also been the leader of the House in the Rajya Sabha. Three more BJP leaders were appointed governors of Mizoram, Madhya Pradesh and Himachal Pradesh, while four others were interchanged.

The Rajya Sabha term of Gehlot, a Dalit leader, was to expire in 2024 and it seems likely that a new face will be elected to the Upper House for the rest of his term and that this person will also get a place in the government. The names of Trinamul turncoat Dinesh Trivedi and Congress defector Jitin Prasada are doing the rounds.

A bunch of leaders who are seen as probables for cabinet berths rushed to Delhi on Tuesday after receiving phone calls asking them to come to the capital, BJP sources said.

Prominent among them was Jyotiraditya Scindia, whose defection from the Congress had helped the BJP to pull down the Kamal Nath government in Madhya Pradesh last year. Scindia is expected to be rewarded with a key ministry at the Centre.

Scindia was spotted offering prayers at the Mahakal temple in Ujjain on Tuesday before he left for Delhi. The BJP has already got him elected to the Rajya Sabha as he had lost his Gwalior Lok Sabha seat in the 2019 elections.

Former Assam chief minister Sarbananda Sonowal, who stepped aside to make way for Himanta Biswa Sarma, also landed in Delhi. Sonowal is likely to get a place in the Modi government.

The leader who evoked the maximum interest, however, was Pashupati Paras, the brother of late Lok Janshakti Party leader Ram Vilas Paswan. Paras, who was seen shopping for clothes in Patna, had led a coup against Paswan’s son Chirag and the BJP helped him get appointed as the leader of the Lok Janshakti Party in Parliament. The sources said Paras had received a call from Union home minister Amit Shah to come to Delhi.

“Raaz ko raaz rehno do (let the secret remain a secret),” Paras said when asked whether he had received a call for being sworn in as minister.

Paswan was a cabinet minister in the Modi government at the time of his death in October last year and Paras is likely to fill the slot.

Modi’s council of ministers can have 81 members. It now has 53 members, which means another 28 can be inducted.

It’s unlikely that Modi will have a full house and the upcoming Assembly polls in five states, prominent being Uttar Pradesh, will be kept in mind while making the fresh inductions.

The BJP sources said some ministers could be dropped or shifted to other ministries based on a review by Modi. Many ministers are now holding more than one key portfolio.

BJP leaders said the exit of the 73-year-old Gehlot was also an indication that young faces could find a place in the ministry. The BJP has unofficially fixed 75 as the retirement age from active politics.

The expansion plans could face a hurdle in the form of Bihar ally Janata Dal United with Nitish Kumar’s party demanding four berths, the sources said.

BJP chief J.P. Nadda has been negotiating with JDU MPs R.C.P. Singh and Lallan Singh, both of whom could be inducted into the cabinet. In addition, the JDU is said to be pressing for two junior ministers, the sources said, arguing that the BJP with 17 MPs from Bihar had five central ministers from the state.

The JDU is the second largest partner in the BJP-led National Democratic Alliance. The JDU had refused to join the government in 2019, rejecting the offer of just one berth as token representation. The BJP wants the ally to be part of the government to send out a message that it is keen on taking its partners along, particularly after losing the Shiv Sena and the Akali Dal.