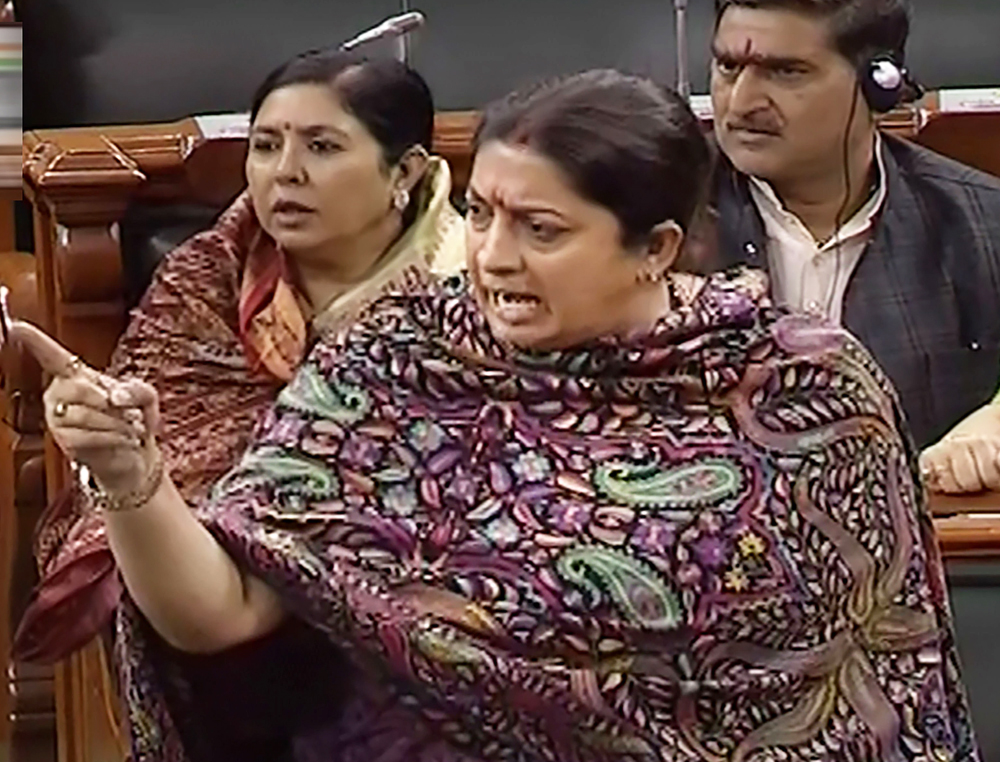 A debate in the Lok Sabha on how to control the rampant rape and murder of women across the country degenerated into a trivial fight over alleged misbehaviour with minister Smriti Irani.

When the members began expressing concern over the horrific incidents, including the rape and murder of a veterinarian in Hyderabad and a rape complainant being set on fire by the accused in Unnao, BJP MPs kicked up a ruckus over a Congress member allegedly moving threateningly towards Smriti who was speaking about “politicisation” of crimes against women.

Soon, the grave topic of debate was forgotten as the “disrespect” shown to Smriti overrode the other concerns.

Congress members T.N. Prathapan and Dean Kuriakose charged towards the Well of the House when Smriti was speaking and Kuriakose rolled up his sleeves when the BJP minister warned them against shouting at her.

The Lok Sabha had to be adjourned twice and the entire business was eventually suspended after the two MPs failed to apologise, as demanded by minister Prakash Javadekar.

Minister of state for parliamentary affairs Arjun Ram Meghwal said Smriti had been speaking on behalf of the government when she was interrupted. Congress MP Gaurav Gogoi, however, said Smriti had started giving a political speech while the Opposition had solely been highlighted the gruesome crimes and wanting to know what the government was doing.

The bickering started right at the beginning when Congress leader Adhir Chowdhury, referring to the Unnao incident in which the accused who had been freed on bail allegedly set the rape complainant on fire, said: “It is strange that a Ram temple is being built and Sita is being burnt alive…. How do the criminals feel emboldened? Look at what Hyderabad police did — they shot dead the culprits when they tried to escape. What is happening in Uttar Pradesh? The accused try to kill victims; earlier too the family of the rape victim had been attacked even as the Supreme Court was looking into the matter.”

This was a reference to an earlier case in Unnao in which BJP legislator Kuldeep Singh Sengar stands accused of raping a girl. The girl’s father was allegedly beaten to death in police custody and an attempt was made on her life.

The BJP members protested against the perceived political comments but many other MPs pointed to the deteriorating law and order in Uttar Pradesh and the absence of the fear of the law among criminals.

While the BSP’s Danish Ali argued that the “lack of will” to give strict punishment was visible in Uttar Pradesh, Trinamul’s Saugata Roy said rule of law could not be maintained without quick delivery of justice. He said: “I don’t support encounters but people have supported the Hyderabad action because our system failed to deliver timely justice.”

Shiv Sena’s Arvind Sawant also said the people had supported Hyderabad police’s action because justice had not been delivered quickly, but insisted that punishment must be meted out by the judiciary.

As Uttar Pradesh was under the scanner, Smriti, who represents Amethi in the state, lamented that the Unnao matter was being “communalised and politicised”. She said: “What happened in Malda? Why are these people silent on that? Those who use rape as a political weapon in panchayat polls are giving sermons here.”

Her aggressive response evoked loud protests from the Opposition members who felt she was playing politics over crimes against women.

Speaker Om Birla said storming the Well and threatening a minister was not allowed.

After the lunch break, the government firmly sought an apology from the two Congress members, who were not present. Several woman members demanded “justice” for Smriti. The BJP’s S.S. Ahluwalia said Congress leader Chowdhury should also apologise or be prepared to face punitive action.

The concern for the abnormal rise in heinous crimes against women was drowned in the chorus for action against indecency in the House.

Chowdhury tried to explain that it was a minor issue but the House failed to transact any business as it was adjourned for the day in the absence of that elusive apology.

Smriti later said: “Today, I had a Congress MP chastise me for he said I spoke aggressively. In the House, some male MPs came towards me rolling up their sleeves, following which a young MP said, ‘Why did Smriti Irani even speak?’ I am shocked. I will want to see in Parliament on Monday how is the Opposition going to punish me further for speaking in the interest of women.”

Parliamentary affairs minister Pralhad Joshi later submitted a notice to the Lok Sabha Speaker under Rule 374 seeking action against Prathapan and Kuriakose for their alleged misconduct.

The alacrity displayed by the government in this case can give some hope to the millions of women who are struggling to save themselves from rape and murder on the streets.