Advertisement
Home / India / Silence of Kashmir is ‘not acceptance’

Silence of Kashmir is ‘not acceptance’ 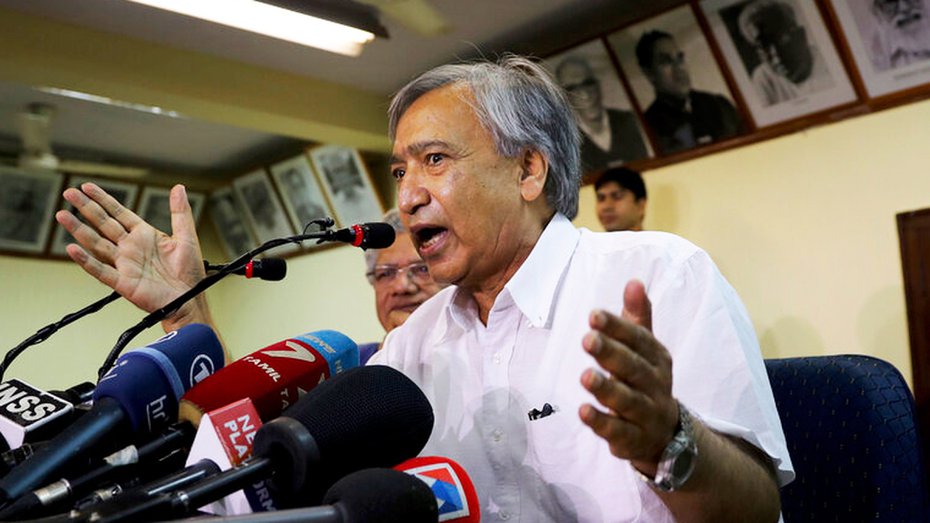 Yousuf Tarigami, a CPM central committee member, minced no words while replying to the question why there has been no protest in Kashmir against the decisions to do away with the state’s special status and bifurcate it.
(AP)
Anita Joshua   |   New Delhi   |   Published 22.10.19, 08:21 PM

Kashmiri politician Yousuf Tarigami on Tuesday said the government should not mistake the silence of Kashmir as “acceptance” of the humiliation unleashed on August 5, adding: “How many times have you seen a protest in Tihar jail?”

Visiting Delhi on what he called his “medical visa” for a check-up at AIIMS, the “detained” CPM leader was interacting with a group of journalists at the residence of CPM general secretary Sitaram Yechury in the heart of the capital.

Tarigami, a CPM central committee member, minced no words while replying to the question why there has been no protest in Kashmir against the decisions to do away with the state’s special status and bifurcate it.

“How many times have you seen a protest in Tihar jail?” he asked, underscoring that the Valley had been turned into a prison with most hotels and guesthouses being used to lodge detainees. The government has often cited the absence of protests in the Valley as evidence of the acceptance of the changes on the ground.

Asked how long the “civil disobedience” would continue, he was again quick on the draw: “Do you ask a person who has met with a tragedy how long the tears will flow? What you are seeing is the disappointment of an entire populace, not just at being betrayed but also humiliated.’’

Asserting that the “civil disobedience” in the Valley was a form of protest, Tarigami said it had not been organised as such but was a manifestation of the overwhelming sentiment in the Valley.

On the possibility of the silence giving way to violence, he said it was not an option. “We will appeal to youngsters not to fall into the trap to isolate us.”

Clearly disappointed with the Opposition for practically abandoning the Kashmiris in what he described as the most terrible period in their recent history, Tarigami said: “We have seen turmoil earlier as well as a lot of violence and destruction. But this is different. Irrespective of the earlier divide, everyone feels humiliated. Those who have stood by unity despite the bullets, those who kept away from the mainstream, and the common people, all feel betrayed as one.

“And herein lies the danger. If this is not addressed by the democratic opinion in the rest of India, it will have serious implications. People have lost faith in the present dispensation in Delhi…. The constitution of Jammu and Kashmir has been dismantled and the state has been dismembered.’’

Challenging the government’s claims that Jammu and Kashmir is now finally fully integrated with India, he said: “If this is the case, then why is it that the provisions of the Indian Constitution are not being applied to the state? Why don’t I have the fundamental right to freedom of expression in my own state?’’

In this context, both Tarigami and Yechury underlined that although the Supreme Court had said in the habeas corpus case that Tarigami was not under detention and could move around after informing the district administration, the four-time CPM legislator had not been allowed to do so.

On his return to Srinagar from Delhi after a medical check-up last month, Tarigami had been picked up from the airport and detained at home.

He and his friends now plan to file an affidavit to inform the court that the administration was not following its directives.

Tarigami suggested that trust in the central government was now completely broken even among those who had always favoured unity.

He urged the Opposition to “come out of their slumber before it is too late’’ and raise their voices against the atrocities being committed on Kashmiris.

Asked why there appeared to be popular support for the decisions of August 5 in the rest of the country, he said: “This is the result of a sustained campaign of misrepresentation by the RSS which projected Article 370 as a clause which promoted terrorism and prevented people from getting development. It is based on a baggage of misinformation.

“The fact is that the alienation of Kashmiris grew because of the erosion of autonomy provided by Article 370.”

Urging the media to visit Kashmir and see for themselves the ground reality as opposed to the claims made by the Centre, Tarigami added: “The government talks about Sabka Sath, Sabka Vikas, Sabka Vishwas. Come to Kashmir and see their trust in us. Kashmir is the new laboratory of vishwas (trust).’’

As a parting shot, Tarigami had a telling request: for links to the articles on the interaction on Wednesday as he would have no way to access them once he returned home.