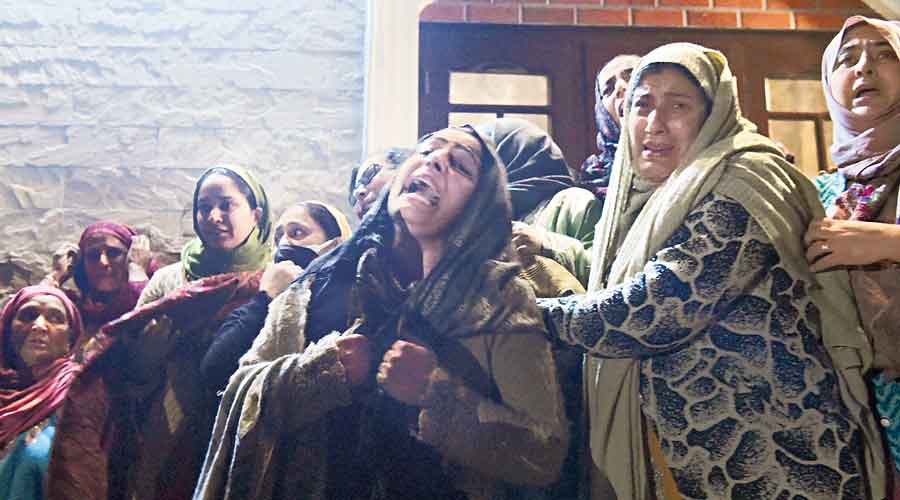 A shutdown against the recent killings of “civilians” during a purported anti-militancy operation in Srinagar paralysed life across the Valley on Friday amidst renewed calls for the return of the body of a third victim.

The Jammu and Kashmir government on Thursday night exhumed the bodies of two businessmen, Mohammad Altaf Bhat and Dr Mudassir Gul, killed in the alleged gunfight on Monday and handed them over to their families for the last rites, marking a rare capitulation to public protests.

The bodies were buried in the ancestral graveyards of the families in Srinagar on Thursday night amid emotional scenes at their homes.

It’s not clear whether the bodies of two others killed in the operation, office assistant Aamir Magrey and alleged Pakistani militant Haider, will be exhumed too. The four had been secretly buried at a graveyard meant for militants in north Kashmir’s Handwara, some 100km from Srinagar, on Tuesday night, triggering protests from their families who wanted the bodies back.

Shops, business establishments and many offices remained shut across Kashmir on Friday in response to the call of a shutdown by the separatists against the killings and subsequent refusal to hand over the bodies to the families.

The government has shown zero tolerance for all forms of dissent after the 2019 scrapping of Jammu and Kashmir’s special status. The unyielding crackdown has pushed the separatists to the margins, with many of their top leaders either behind bars or under house arrest.

Monday’s killings, however, have given the separatists fresh ammunition to hit out at the government.

Moderate Hurriyat chairman Mirwaiz Umar Farooq, under house arrest for over two years, and the jailed leader of the hardline faction, Masrat Alam, had given Friday’s shutdown call.

Lateef Magrey, father of the slain Aamir, regretted that his son’s body had not been returned. “I have no hope that they will return my son’s body because they seem to have made up their mind that he was a militant. But I still appeal to the LG (lieutenant governor Manoj Sinha) sahab to return his body as I firmly believe that he too was innocent,” Magrey, a resident of Jammu’s Ramban district, told The Telegraph.

“We approached the district administration in Ramban today but they told us that they have written to officials in Srinagar to return his body,” the berieved father said.

An official in Ramban refused to comment on the claim. Valley politicians on Friday asked the government to explain why it was not returning Aamir’s body.

“Aamir Magrey, also killed in the Hyderpora encounter, is yet to be given a decent burial by his mourning family. The fact that these families are begging for mortal remains instead of asking for justice reflects their lack of faith in the system. His body must be returned immediately,” former chief minister Mehbooba Mufti tweeted.

Aamir Magrey also killed in Hyderpora encounter is yet to be given a decent burial by his mourning family. The fact that these families are begging for mortal remains instead of asking for justice reflects their lack of faith in the system.His body must be returned immediately pic.twitter.com/gqkGeEVI75

The five-party People’s Alliance for Gupkar Declaration, fighting for the restoration of Article 370 provisions, on Friday wrote to President Ram Nath Kovind seeking a time-bound “judicial probe” into the killings. The government of the Union Territory has ordered a magisterial inquiry.

“Such unfortunate incidents widen the gulf between the people of J&K and the government of India. We would also bring to your notice the practice of taking away bodies of the victims of such incidents and depriving their families of the right to organise their burial in accordance with religious practices… Your Excellency, the right to decent burial is well recognised in the Constitution of India as well as in the international humanitarian law,” alliance president Farooq Abdullah said in the letter.

“The dead bodies cannot be denied the right to burial under any circumstances including the so-called law and order problem. The bereaved families likewise also have a right to organise burial of the dead bodies in accordance with their religious practices. In the previous few years such rights have been violated with impunity. In the present case these rights are being denied.”

The police claim the dead include three militants or over-ground workers — Haider, Aamir and Gul — and an innocent man — Bhat, who was killed in crossfire. Their families claim they were innocent and killed in a staged gunfight.

Aamir’s father has written to the government that his son was a “true nationalist”.

“The applicant (killed) one militant in the year 2005 and the then governor decorated the applicant with a gold medal, sena medal. Thereafter the applicant worked with security forces in an anti-militancy operation,” Magrey wrote about himself.

Magrey had been at the forefront of fighting militancy in his area and had killed a militant in 2005 for which he was rewarded by the government.