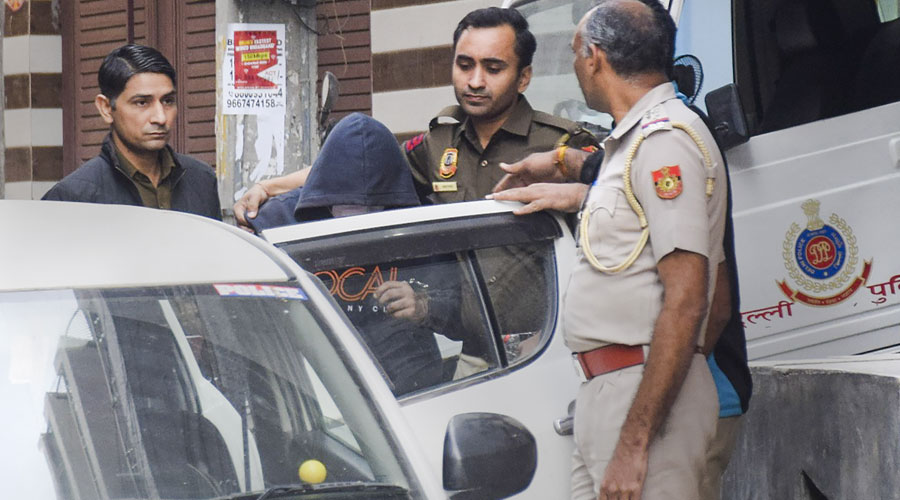 Aftab Ameen Poonawala, accused of killing his partner Shraddha Walkar, being brought to his residence at Chhatarpur as part of the ongoing investigation, in New Delhi.
PTI Photo
PTI   |   New Delhi   |   Published 25.11.22, 05:56 PM

He had undergone a marathon polygraph test of nearly eight hours on Thursday. However, officials at the facility found it difficult to record his statements as he was not well.

Poonawala was brought to the Forensic Science Laboratory (FSL) at Rohini on Friday for another session of the polygraph test, also called the lie detector test, as he seems to be in better health, they said.

Poonawala allegedly strangled his live-in partner Shraddha Walkar (27) and sawed her body into 35 pieces, which he kept in a 300-litre fridge for almost three weeks at his residence in south Delhi's Mehrauli before dumping those across the city over several days past midnight.

"During the session (of polygraph test) on Thursday, Poonawala was asked details about the case, what triggered him to kill Walker, if it was a planned event or he did it in a fit of rage like he claimed in the court.

"All the sequence of event that transpired ever since they started dating and how he decided to dispose of the body in such a gruesome manner. He was also asked about the kind of weapon he used to chop her body along with various other questions related to the case that could give lead to further investigation in the case," an FSL source had said.

Police also said the saw used to cut the body is yet to be recovered.

The incident has also taken a political turn with Union Home Minister Amit Shah assuring "strict punishment" to the accused in minimal possible time, while the CPI(M)has alleged that the murder and dismemberment of Walker by her Muslim boyfriend was being used for "communal propaganda".