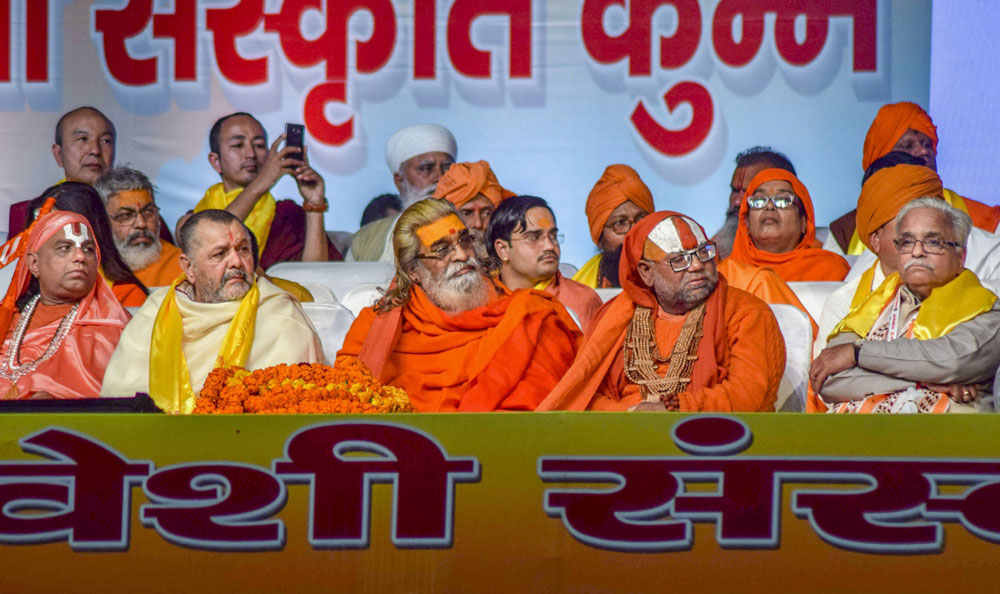 One of the three Shankaracharyas of the country has declared that sadhus will begin marching from the Ardh Kumbh Mela in Allahabad to Ayodhya after February 10 to lay the foundation of a Ram temple at the disputed site on February 21, appearing to launch a parallel movement opposed to the Vishwa Hindu Parishad’s.

Swaroopanand Saraswati, the Shankaracharya of Jyotir Math in Badrinath and Dwarka Peeth in Gujarat, said on Wednesday: “Whatever the Vishwa Hindu Parishad has been doing in Ayodhya in the name of a Ram temple is against the strictures of the Hindu religion, which teaches us peaceful co-existence.

“We will follow the rules of Hinduism and lay the foundation stone of a Ram temple where the makeshift temple of Ram Lalla (infant Ram) exists,” Swaroopanand said.

The Shankaracharya, who is vehemently opposed to Narendra Modi and the VHP, made the comments a day after the Centre sought the Supreme Court’s permission to return the “non-disputed” land in Ayodhya to the original landowners that included a VHP trust formed to oversee the construction of the Ram temple.

Swaroopanand, 94, announced the march on the concluding day of the three-day Param Dharma Sansad (Supreme Religious Parliament) at the Ardh Kumbh Mela on the banks of the Sangam. Around 400 sadhus attended the meeting.

The Shankaracharya briefed the sadhus about the decisions taken at the three-day Param Dharma Sansad in Varanasi from November 25 to 27 and the second meeting, which began at the Sangam on January 28.

Swaroopanand on Wednesday asked sadhus owing allegiance to him to reach Ayodhya in groups of four to avoid action in case the government imposes prohibitory orders under CrPC Section 144.

“The assembly of five or more people is prohibited under Section 144. Each sadhu will carry four stones to lay the foundation of the Ram temple. The sadhus have handed me four stones named Nanda, Jaya, Bhadra and Purna. I will begin the shilanyas (foundation-laying) with these four stones, which have been purified,” he said.

Swaroopanand said the first Mughal emperor, Babar, had never visited Ayodhya and that his memoirs, Babarnama, do not mention the Babri Masjid, countering the VHP’s claims.

“It is a proof that Babar had nothing to do with Babri Masjid or the birthplace of Lord Ram. The VHP is unnecessarily misusing this issue to help the BJP win elections. The truth is that all of them are anti-religion,” said Swaroopanand, who had been jailed in 1942 for participating in the Quit India Movement.

The VHP claims that Babar’s chieftain in Awadh, Mir Baqi, had constructed the mosque on the orders of the Mughal emperor.

Alleging that the VHP-BJP has been instigating people to turn violent, the Shankaracharya said he and the other sadhus who would march to Ayodhya would observe non-violence and civil disobedience.

“Maybe the BJP government will ask its forces to open fire on us. We are ready to take their bullets and lay down our lives for the Ram temple,” Swaroopanand said.

The Shankaracharya believes laying the foundation stone would not be contempt of the Supreme Court.