SC to examine farmers’ right to protest on sub-judice issue

The observation came following a request from attorney-general K.K. Venugopal, who was representing the Centre along with solicitor-general Tushar Mehta 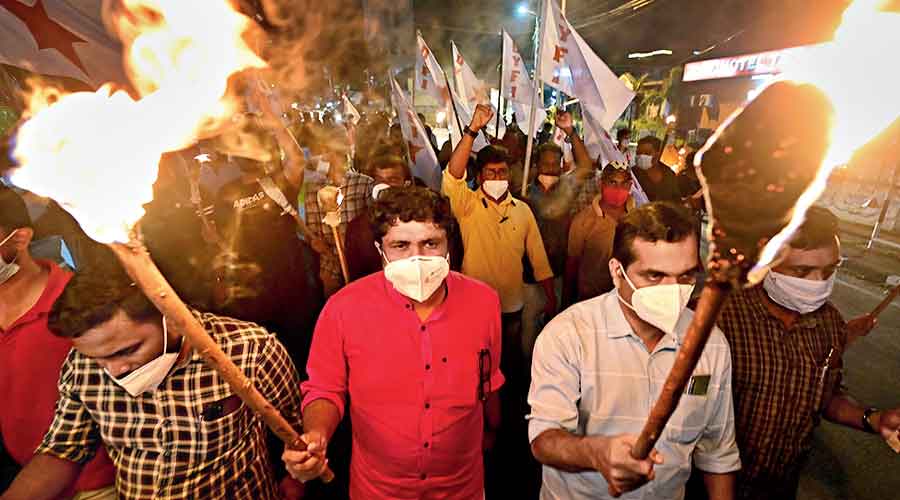 The Supreme Court on Monday decided to examine the constitutionality of the farmers’ right to protest on a sub-judice issue, particularly when the controversial farm laws had been stayed and were “not in force”.

The court said the “central issue” was “whether the right to protest is an absolute right”.

It also referred to the death of four protesting farmers under a car’s wheels — to which a Union minister’s son has been linked — in Lakhimpur Kheri, Uttar Pradesh, on Sunday.

The observation came following a request from attorney-general K.K. Venugopal, who was representing the Centre along with solicitor-general Tushar Mehta.

“Your Lordships may please make it clear they (farmers) can’t continue the protests. All of us have seen the unfortunate incidents that have happened,” Venugopal said, alluding to the Lakhimpur Kheri incident.

In January, the apex court had stayed the three farm laws while hearing a bunch of petitions filed by farmers, individuals and NGOs, challenging their constitutionality.

“Why the protest when the law is not in force at all? We have stayed the laws, the government has said it is not implementing it. Then why the protests?” Justice Khanwilkar asked advocate Ajay Chaudhary, who was appearing for petitioner Kisan Mahapanchayat, a Rajasthan-based farmers’ organisation.

The court made the observation after Venugopal and Mehta contended that the farmers, protesting on Delhi’s borders since end-November, could not continue their agitation after having approached the apex court.

Venugopal said the government had made it clear that it would not withdraw the three laws but leave their constitutionality to be decided by the apex court.

The court was hearing the Kisan Mahapanchayat’s petition to be allowed to protest on Delhi’s Jantar Mantar Road, a designated protest site. The Mahapanchayat is not part of the Delhi border protests.

“What’s the point of protesting at Jantar Mantar?… You can’t do both, challenge a law and then go and protest. Either come to court or go to Parliament or go to the road (protest),” the bench said.

Justice Khanwilkar directed that a petition filed by the Kisan Mahapanchayat before Rajasthan High Court, challenging the three laws, be transferred to the apex court.

The order passed by the bench said: “We deem it appropriate to examine the central issue as to whether the right to protest is an absolute right and, more so, the writ petitioner having already invoked the legal remedy before the constitutional court by filing writ petition, can be permitted to urge much less assert that they can still resort to protest in respect of the same subject matter which is already sub-judice before the court.”

The matter will be heard again on October 21.

Another Supreme Court bench, headed by Justice Sanjay Kishan Kaul, has issued notices to 43 farmers’ organisations participating in the protests on Delhi’s borders.

The Haryana government had requested the bench to implead these organisations in relation to a petition filed by a Noida-based woman seeking removal of the highway blockades caused on Delhi’s borders by the farmers’ protests.

The Samyukta Kisan Morcha (SKM), which is spearheading the farmers’ movement, again clarified on Monday that it had never approached the Supreme Court or any other court for resolution of the core issues of the agitation: repeal of the three anti-farmer central laws and enactment of a law guaranteeing minimum support price.

The SKM said it had always believed that the three central laws have to be repealed by the government itself. Towards this end, the SKM has written to the President and the Prime Minister asking for the dialogue to be resumed and demands to be fulfilled.

“The SKM did not approach the Court even on the constitutionality matter — while it is important that state government’s constitutional authority over agriculture has to be restored and strengthened, it is equally important to realise that the issues with the farm laws are not just about constitutionality, or lack thereof. It is about the implications of the farm laws on farmers and the death blow to their fragile livelihoods. While the laws might have been suspended from implementation for now, the SKM realises that the stay can be lifted any day. Therefore, the movement has insisted on a full repeal of the laws.’’

The SKM underscored that the petitioner in this case has got nothing to do with the Morcha.

Additional reporting by Our Special Correspondent in New Delhi