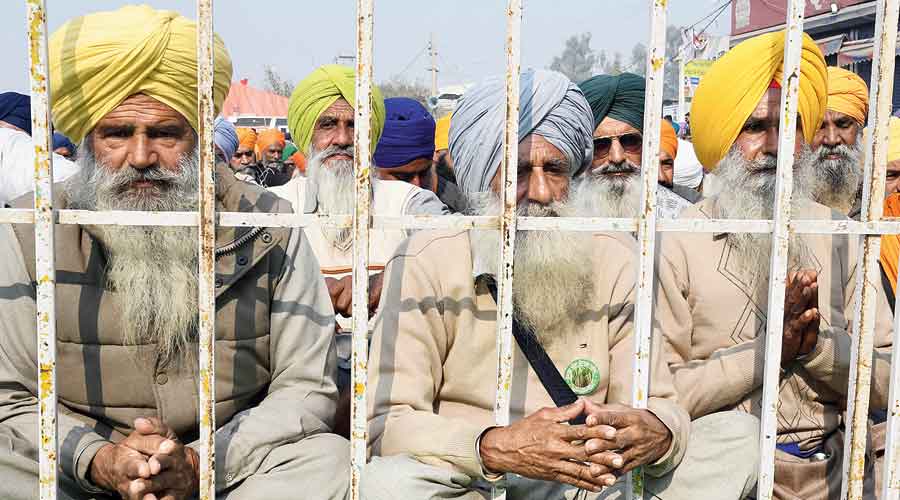 The participating farmer bodies were asked to give their views on the three Acts, on Thursday.
Telegraph Picture
Our Bureau And Agencies   |   New Delhi   |   Published 21.01.21, 06:20 PM

The Supreme Court-appointed panel on the new agri laws on Thursday started its consultation process and interacted with 10 farmer organisations from eight states, including Uttar Pradesh.

The apex court had on January 11 stayed the implementation of the three laws, against which farmers are protesting at Delhi borders for nearly two months now, till further orders and appointed a four-member panel to resolve the impasse.

Currently, there are three members in the panel as the fourth, Bhartiya Kisan Union president Bhupinder Singh Mann, has recused himself from the committee.

The panel, in a statement, said that the interaction was held through video conference with various farmer unions and associations on Thursday.

Members had met for the first time on Tuesday at the Pusa campus in New Delhi. Ghanwat revealed that the first round of consultations with farmers and other stakeholders has been scheduled for Thursday.

“The farmers’ unions participated in the discussion and gave their frank opinion including suggestions to improve the implementation of Acts,” the statement said.

On Wednesday, the protesting unions had told the Supreme Court that they would not participate in meetings and deliberations to be held by the court-appointed committee to address their grievances and maintained they wanted the new farm laws repealed.

The top court told the lawyers appearing for farmers unions that all it wanted is a resolution of the impasse and peace, while the clarifying committee has not been given adjudicatory powers and it will only submit its report to it.

The participating farmer bodies were asked to give their views on the Farmers’ Produce Trade and Commerce (Promotion and Facilitation) Act, 2020, the Farmers (Empowerment and Protection) Agreement on Price Assurance and Farm Services Act, 2020, and the Essential Commodities (Amendment) Act, 2020.

President of Maharashtra-based Shetkari Sanghatana Anil Ghanwat and agri-economists Ashok Gulati and Pramod Kumar Joshi are the three members of the panel.

“The biggest challenge for the panel is to convince agitating farmers to come and speak with us. We will try our best,” Ghanwad had said on Tuesday.

Ghanwat further said the committee will seek views of farmers and all other stakeholders on the new farm laws, besides the central and state governments.

“Panel members will keep their personal views on farm laws aside while preparing a report to be submitted to the Supreme Court,” he said.