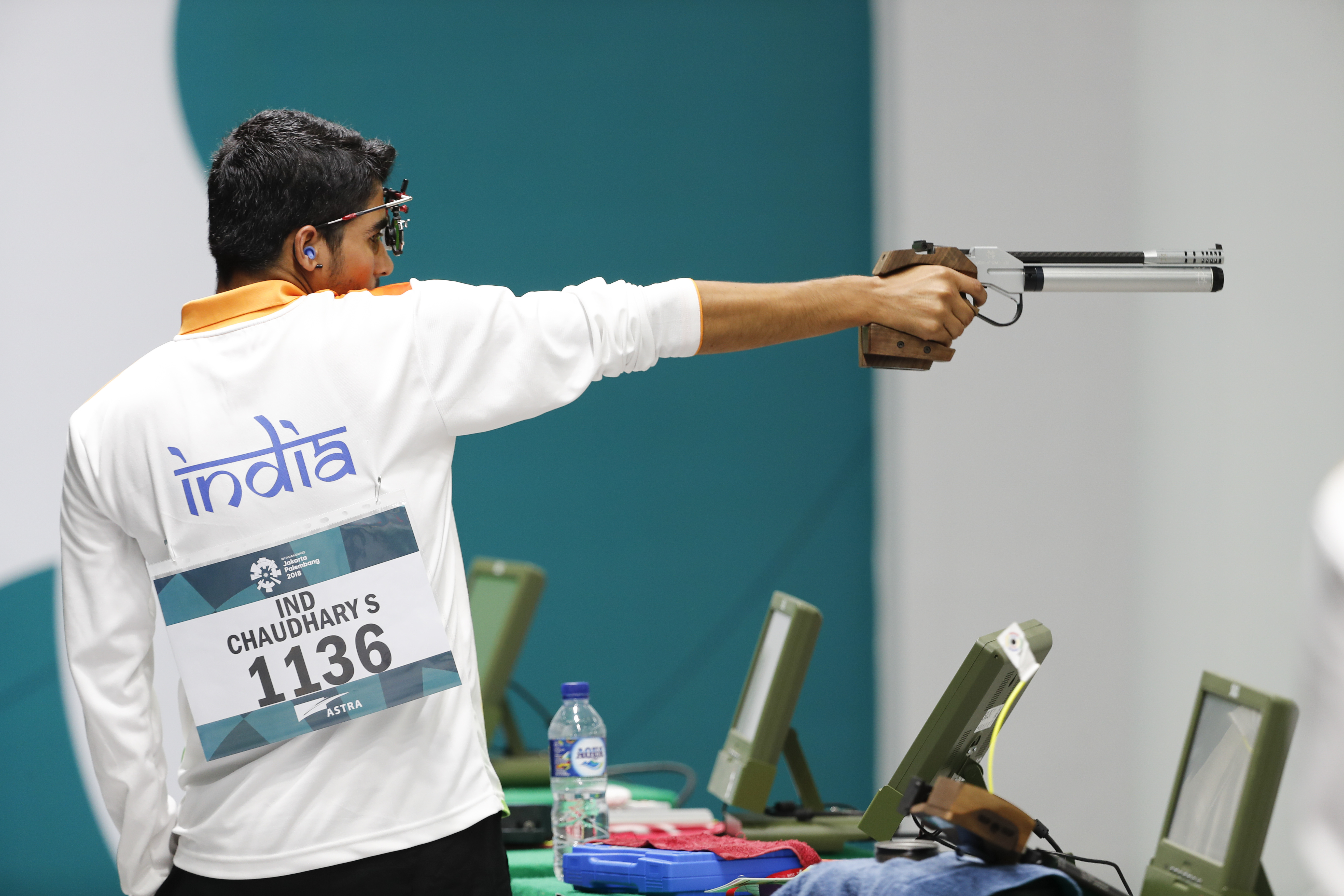 He showed composure against a seasoned field that also included South Korean Jin Jin-goh, who won Olympic gold medals at Beijing, London and Rio de Janeiro and is a multiple world champion but placed fifth in Palembang.

'I did not feel any pressure,' said Chaudhary, the son of a farmer from Kalina village in Meerut

He picked up the sport only three years ago, training at Amit Sheoran's academy at Benoli near Baghpat, 53km from Meerut.

Whenever he is home, he helps his father in the farming business.

'I like farming. We don't get much time off from training but whenever I do, I go back to my village and help my father,' the teenager said.

Chaudhary, a student of class XI, will be off to the World Championships after the Games.

Praise from home flowed in quickly after Chaudhary picked up the gold, from high-profile athletes and public figures. Cricketer cricketer Virender Sehwag, of course, asked the most pertinent question..

What were you doing when you were 16?
Saurabh Chaudhary is shattering records, a new Games Record in Final with score of 240.7 pts. Congratulations for the Gold Saurabh, competing against some of the best in the world. India India 🇮🇳🙏🏼 pic.twitter.com/zMg3dv5M5h

Like Chaudhary, Rohtak-based Verma, too, picked up the sport three years ago.

The 29-year-old lawyer-cum-shooter did begin well but saved his best for the last to win bronze.

'I was nervous in the beginning seeing a field like that. But then I composed myself. It is my first international event and I have won a medal. It feels great of course,' Verma, who hails from Rohtak, told PTI.

In the fifth series, he shot a couple of 10.7s to get himself into medal contention. He consolidated from there, producing a solid finish.

He and another teen sensation Manu Bhaker had disappointed in the mixed team event, failing to qualify for the final.

'The fact that Manu and I failed to qualify in mixed team, we were not disappointed. We learnt a lot from that failure,' he said about that missed opportunity.

Superb show by young Saurabh !! Many many Congratulations. We must pledge support to these young athletes for a sustained period of time irrespective of results. They have the ingredients for Olympic success. Needs persistent support irrespective.

Saurabh Chaudhary has an Asian Games gold medal at the age of 16 after winning the men's 10-meter air pistol title on debut in senior competition at Palembang.

Chaudhary, who only took up the sport competitively three years ago and set a junior world record earlier this year, won with a Games record of 240.7 in the 24-shot final. Japan collected silver via 42-year-old ex-world champion Tomoyuki Matsuda, who was a point behind.

It’s one heck of an achievement to compete at the Asian Games when you are a teenager.But to win a Gold @asiangames2018 is what dreams are made of .. congratulations to Saurabh Chaudhary .. Proud!! 😀🇮🇳