Some of their demands are that of sacking Union Minister Ajay Kumar Mishra, compensation to the families of farmers who died in agitation 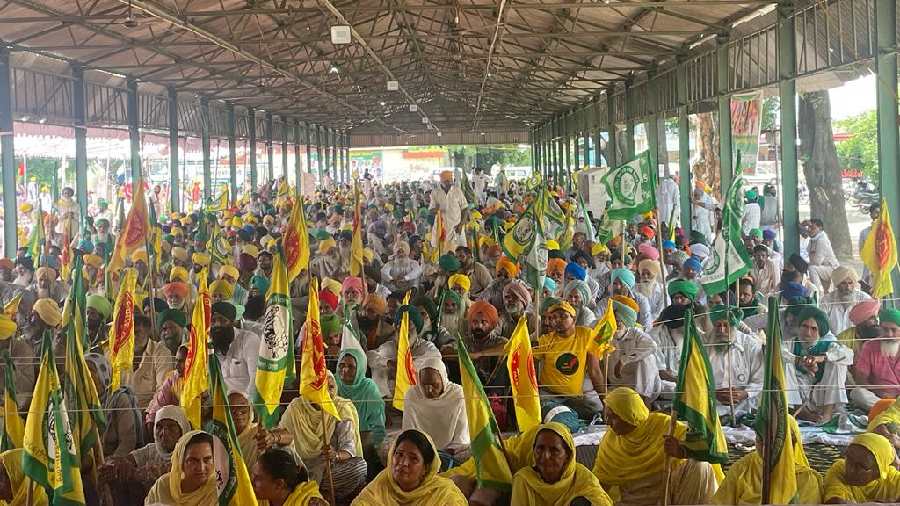 Farmers from Punjab, Haryana and Uttar Pradesh on Thursday began a three-day protest, demanding the sacking of Union minister Ajay Kumar Mishra over the violence here last year for which his son is in the dock.

The protesters, who included farmers from Madhya Pradesh, Uttarakhand and Tamil Nadu as well, also demanded a law on minimum support price (MSP) for their crops and withdrawal of the Electricity (Amendment) Bill, 2022.

Bhartiya Kisan Union-Tikait and other constituents of the Samyukta Kisan Morcha (SKM) gave the call for the 75-hour-long sit-in from August 18 to 20 to seek "justice" in the Lakhimpur Kheri violence case.

The SKM had spearheaded the year-long sit-in at Delhi's borders which forced the Centre to withdraw three new agri laws.

Speaking to news persons at the dharna site, BKU national spokesperson Rakesh Tikait vowed that the SKM would continue its fight for justice to the farmers across the nation.

"The Lakhimpur agitation was primarily to press for the dismissal of Ajay Kumar Mishra from the Union Cabinet," Tikait said. "Moreover, a law on minimum support price (MSP) to the farmers was also a major demand of the SKM," he added.

Mishra is the Union minister of state for Home.

"The (Modi) government is bent on handing over power supply to the private sector through the Electricity (Amendment) Bill, 2022. BKU and SKM would oppose this move as this would adversely affect the farming sector," Tikait said.

BKU (Lakhewal) state vice-president Avtar Singh Mehlo, who arrived at the dharna along with his supporters, said, "Our fight is for justice to the farmers killed in the Tikunia violence on October 3, 2021."

"We demand the sacking of Union MoS for Home Ajay Kumar Mishra, compensation to the families of farmers who died in the farmers' agitation, a law on MSP, and roll-back of the Electricity (Amendment) Bill, 2022," Mehlo said.

The Union minister's son, Ashish Mishra, is an accused in the violence that left eight people, including four farmers, dead at Lakhimpur Kheri last year.

Four farmers, who were part of a protest, were mowed down by an SUV, with the minister's son allegedly being one of its occupants. A driver and two BJP workers were allegedly lynched by angry farmers. A journalist had also died in the violence.

At the dharna site, volunteers mostly from Punjab were seen taking over the stay and 'langar' arrangements, cooking and serving food, tea and water to the agitating farmers.

Asked if permission had been taken for the agitation, district president of Bharatiya Kisan Union-Tikait (BKU-Tikait) and local convener of the agitation Dilbagh Singh Sandhu said "We had informed the district authorities about the agitation."

"Though no written permission was sought or obtained, the authorities have made arrangements for safety and security, sanitation, and water etc," he told PTI.

Elaborate security arrangements in and around the Mandi Samiti grounds have been put in place.

The agitating farmers are accommodated under half-a-dozen sheds at the Mandi Samiti auspices. Shed number five was converted into the main meeting place, while sheds two, three, four and six served as stay and 'langar' arrangements.

The whole area, including the main stage under shed number five, was covered with flags and banners of farmer unions.