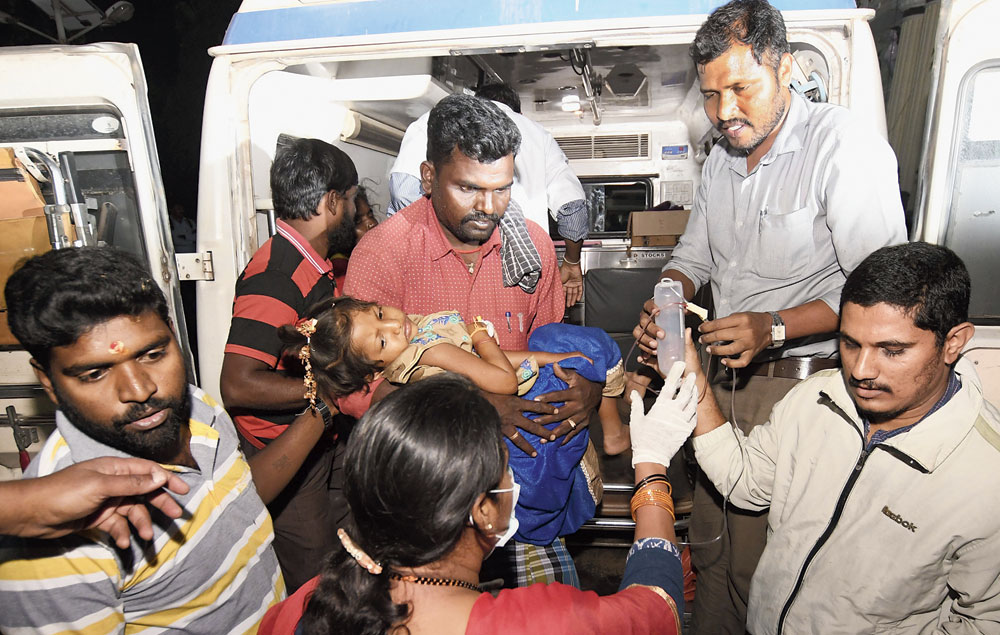 A sadhu is among four persons arrested for the prasada poisoning that killed 15 devotees near Mysore last week and his attempt to seize control of a temple has emerged as the possible motive.

The plot unravelled when it emerged that the priest of a temple had pretended to have been poisoned.

Police in Chamrajnagar, 180km from Bangalore, arrested Immadi Mahadevaswami, a 52-year-old sadhu at Mahadeshwara Hill Saluru Mutt, Kichchugutti Maramma temple manager Madesh, 46, his wife Ambika, 35, and Doddiah, 35, the priest of another temple in a nearby village.

The prasada had been served at Kichchugutti Maramma temple. The arrests took place after a blood report suggested Doddiah had pretended to have been poisoned.

The police said Mahadevaswami had hatched the plot to take control of the Maramma temple by defaming its office-bearers, who had set up a trust to manage temple funds after cash was allegedly siphoned off.

Soon after the poisoning Doddiah had got himself admitted to a hospital in nearby Mysore, complaining of stomach pain and claiming that he had consumed the prasada. But a blood test revealed that he had lied as no trace of the insecticide that was mixed with the prasada was found in the sample.

Inspector-general K.V. Sharat Chandra told reporters in Chamrajnagar: “The incident was the fallout of an internal power struggle between a group led by the seer and those who control Kichchugutti Maramma temple at Sulwadi in Chamrajnagar.”

For decades now the mutt has had a say in the running of the Maramma temple.

Sharat Chandra said the temple office-bearers, who suspected pilferage of revenues by Mahadevaswami and his cohorts, last year formed a trust to monitor the income.

“The sadhu was upset with the decision to set up the trust as his source of income had dried up. This led to serious differences between the two groups,” the IG said.

Things came to a head when Mahadevaswami assigned a contractor to build an ornate “gopuram” (entrance tower) for the Maramma temple at a cost of Rs 1.2 crore in October without consulting the temple office-bearers.

With just Rs 34 lakh in the coffers, the temple office-bearers decided to find another contractor to build a more affordable tower. They suspected that Mahadevaswami planned to embezzle more money by ordering such an expensive work.

The sadhu then allegedly plotted with his supporters to poison the prasada at Maramma temple to disrupt the event. Temple manager Madesh and his wife Ambika allegedly got the insecticide and handed it over to Doddiah.

Doddiah allegedly mixed the insecticide with the rice pulav prepared in the temple kitchen as prasada.

The forensic test has confirmed the presence of monocrotophos, a deadly insecticide, in the prasada served to the devotees. While 15 devotees died, more than 100 people received treatment in hospital.

The four arrested persons have been booked under IPC Sections 302 (murder), 307 (attempt to murder), 120B (criminal conspiracy) and 118 (concealing design to commit offence punishable with death or life imprisonment).

The police have questioned 35 suspects, including cooks and helpers at the temple, since Friday.

The poisoned temple offering was served to more than 100 people, including many from neighbouring villages. While nine of them died the same day, six more passed away in hospitals over the next few days.

The Karnataka government has since ordered the installation of security cameras at the kitchens of all places of worship across the state.

The government has also announced an ex gratia of Rs 5 lakh each to the kin of the deceased.