On Wednesday, more than 20,000 devotees marshalled through social media, mostly women, held a protest march in Pandalam, headquarters of an erstwhile royal family that once governed the temple 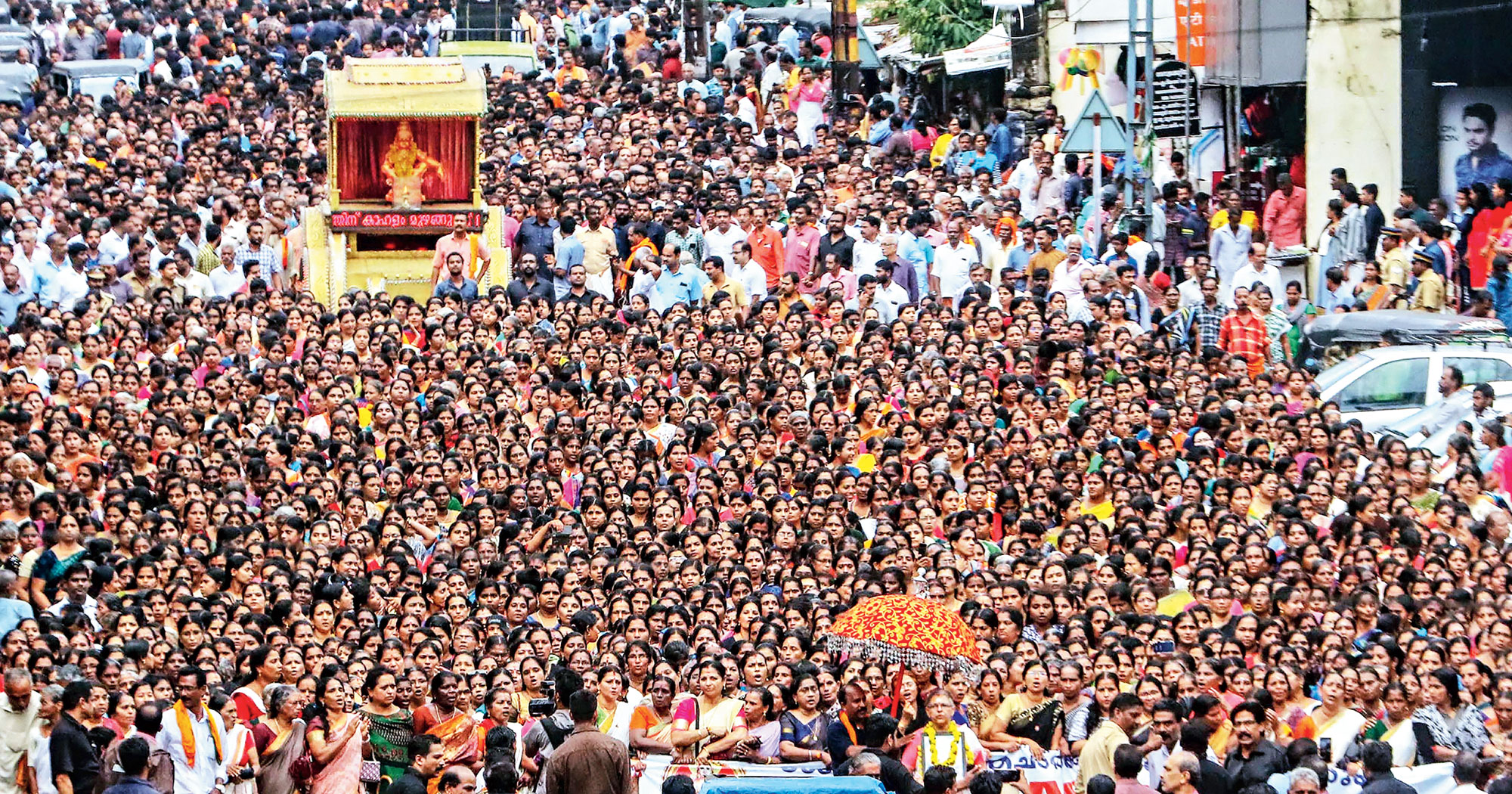 Devotees, mostly women, take part in a march in Kottayam on Saturday against the Supreme Court verdict on the entry of women of all ages into the Sabarimala shrine.
(PTI)
K.M. Rakesh   |   Bangalore   |   Published 07.10.18, 10:07 PM

Right-wing Hindu groups appear to be prodding Malayalam media houses for more prominent coverage of their protests against moves to allow women of all ages to enter the Sabarimala shrine.

A social media campaign has begun asking people to unsubscribe from publications such as Mathrubhumi, the Malayalam daily with the second-highest circulation figures that is being accused of playing the protests down.

The Supreme Court recently lifted the centuries-old ban on women of “menstrual age” (10 to 50 years) entering the shrine. Several orthodox and radical Hindu groups are agitating against the Kerala government’s decision not to file a review petition, and appear angered by what they feel is the mainstream media’s “limited” coverage of their protests.

On Wednesday, more than 20,000 devotees marshalled through social media, mostly women, held a protest march in Pandalam, headquarters of an erstwhile royal family that once governed the temple.

The leading Malayalam daily, Malayala Manorama, carried a front-page picture of the march but Mathrubhumi came under attack for carrying a report on an inside page and without a picture.

V.S. Rajan, a lawyer associated with the Hindu Aikyavedi, a Sangh parivar organisation, said that “believers are hurt” that some newspapers and television channels were “playing down” the protests.

“We expect a balanced approach. Although the media should have its freedom, the people have every right to question any deliberate exclusion of important events,” he said.

A message seeking a reaction from the Mathrubhumi PRO had not evoked any response till late Saturday evening but a senior journalist with Malayala Manorama admitted there was “covert” pressure on the media.

“There is definitely a whisper campaign against mainstream media (houses) that dare to be neutral,” the journalist said, asking not to be identified.

“All of us are ‘anti-Hindu’ in the eyes of the Sangh parivar. Today they’re targeting Mathrubhumi; tomorrow it could any one of us.”

This is not the first time Mathrubhumi has fallen foul of pressure groups this year. A lobby within the Nair Service Society (NSS) — a socio-cultural organisation of the influential Nair community — had carried out a campaign against the media house over a novel.

The Mathrubhumi weekly was serialising Meesha (moustache), authored by Kerala Sahitya Akademi awardee S. Harish, which was accused of containing derogatory comments against Hindu women. The backlash — bolstered by the right-wing Hindu groups joining in — prompted the writer to withdraw the novel.

The NSS, which is not affiliated to Sangh parivar groups, has already made its presence felt in the Sabarimala protests. Several protests have been held since the one in Pandalam. The Congress and the BJP are echoing the protesters’ sentiments, with an eye on the Hindu vote in the 2019 general election.

Senior lawyer and columnist Sebastian Paul expressed concern at “the manner in which some groups are using social media to put pressure on the media”.

The former CPM-backed Independent Lok Sabha MP added: “But the BJP, which managed to influence some national dailies and TV channels, will not succeed in controlling Malayalam media.”

A noted Malayalam writer, who did not want to be named, condemned the trend of targeting media houses. “It’s very sad how vested interests are trying to bulldoze our media to toe their line,” the writer said.

The president of the government-appointed but autonomous Travancore Devaswom Board that manages the shrine, A. Padmakumar, had initially promised to file a review plea but has backed out — apparently under pressure from chief minister Pinarayi Vijayan.

Many devotees’ groups, however, do plan to move a review petition and are consulting among themselves about the possibility of a joint plea.

John Brittas, senior journalist and media adviser to the chief minister, saw the protests in support of the ancient temple tradition as a trek backwards.

“We have to keep in mind that this is happening almost a century after the Vaikkom Satyagraha against untouchability and inequality in Hindu society,” he stressed.

The Vaikkom Satyagraha was organised in 1924-25, when only the upper castes were allowed to enter temples. The mass movement, which had Mahatma Gandhi’s support, eventually opened the doors of all temples to people from every caste.

“Mahatma Gandhi personally intervened to end the inhuman practice. But his own disciples are fighting to protect the last bastion of untouchability,” Brittas said, alluding to the Congress support for the age bar on women entering the Sabarimala shrine.

The Opposition Congress and BJP are both singing a similar tune, obviously with an eye on Hindu votes ahead of the 2019 Lok Sabha polls in the Left-ruled state.

The entry of Nair Service Society (NSS), a socio-culture organisation of the influential upper-caste community has only added steam to the protests. The NSS also happens to be the first to decide on filing a review petition against the judgement.