The Prime Minister conveyed concern for the security of its citizens, including students, present in the war-torn country, urges Kyiv to evacuate them safely 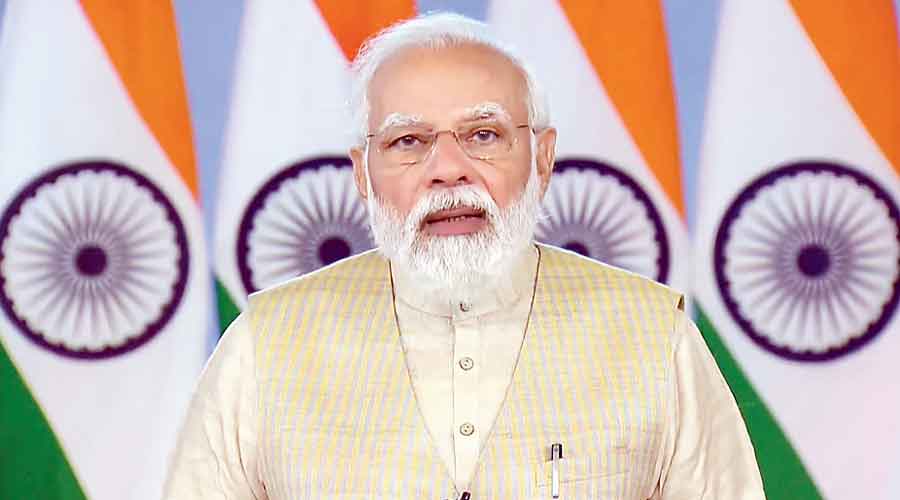 India on Friday abstained from voting in the United Nations Security Council on a US-backed draft resolution condemning the Russian invasion of Ukraine, and urged all parties to return to the path of diplomacy and dialogue.

In the 15-nation UNSC, India took the same position as China, whose forays along Ladakh after the Galwan bloodbath have yet to be resolved. China and the United Arab Emirates were the two other UNSC members that abstained while Russia used its veto power as a permanent member to block the passage of the resolution on Ukraine.

Caught between the conflicting interests of two of its strategic partners, India chose to hold on to the middle path it has been treading on the Ukraine crisis, even at the risk of being widely seen as siding with the invader.

India has been nudged by both sides to toe their respective lines at the UNSC. In particular, there is continuing pressure on New Delhi to speak out against Moscow.

Hours after India abstained from the vote, Ukrainian President Volodymyr Zelensky tweeted that he had spoken to Prime Minister Narendra Modi.

Prime Minister @narendramodi. Informed of the course of

aggression. More than 100,000 invaders are on our land. They insidiously fire on residential buildings. Urged

to give us political support in

Security Council. Stop the aggressor together!

“Spoke with Indian Prime Minister @narendramodi. Informed of the course of Ukraine repulsing Russian aggression. More than 100,000 invaders are on our land. They insidiously fire on residential buildings. Urged India to give us political support in UN Security Council. Stop the aggressor together!” Zelensky wrote.

The Indian readout of the conversation was at variance with what the Ukrainian President tweeted. Stating that Zelensky had briefed Modi in detail about the ongoing conflict, India said the Prime Minister had expressed deep anguish about the loss of life and property.

“He reiterated his call for an immediate cessation of violence and a return to dialogue, and expressed India’s willingness to contribute in any way towards peace efforts,” New Delhi said.

Modi also conveyed India’s concern for the security of its citizens, including students, present in Ukraine and urged Kyiv to evacuate them safely and swiftly. India is already evacuating its citizens in Ukraine from countries located along its western borders.

Indian nationals, evacuated from Ukraine, react on their arrival at Mumbai airport on Saturday.
PTI

Russian President Vladimir Putin had spoken to Modi on Thursday. The foreign ministers of several European countries too have been reaching out to India to get it to speak out against Russia.

Earlier, explaining New Delhi’s stand on the UNSC vote in New York, India’s Permanent Representative to the United Nations, T.S. Tirumurti, had said: “We urge that all efforts are made for the immediate cessation of violence and hostilities…. The contemporary global order has been built on the UN Charter, international law, and respect for the sovereignty and territorial integrity of states.

“All member states need to honour these principles in finding a constructive way forward. Dialogue is the only answer to settling differences and disputes, however daunting that may appear at this moment. It is a matter of regret that the path of diplomacy was given up. We must return to it.”

Sources claimed that by abstaining, India had retained the option of reaching out to either side with the aim of fostering dialogue and diplomacy.

That the resolution would be blocked was a foregone conclusion given Russia’s veto power.

After the draft resolution was defeated, the US Representative to the United Nations, Linda Thomas-Greenfield, issued a joint statement on behalf of 51 countries stating: “This resolution was vital and straightforward. Fundamentally, it was about whether the countries on the Security Council — charged with maintaining international peace and security — believe in upholding the UN Charter.”

The matter may now be taken to the United Nations General Assembly where no country has a veto.

The first evacuation flight from Bucharest, Romania, landed in Mumbai on Saturday evening. The government has named the evacuation from Ukraine Operation Ganga. With videos continuing to surface on social media of some students stuck in Ukraine without any assistance reaching them, the government is now urging the evacuated Indians to reassure those still stranded not to give up hope and that help will reach them.

Indo-Russia ties are 'distinct': US