Advertisement
Home / India / India is no longer the country of 'Midnight's Children': Salman Rushdie
'An even darker phase than the Emergency years'

India is no longer the country of 'Midnight's Children': Salman Rushdie

In a long article in The Guardian newspaper, the author describes how the country has changed in the four decades since the book's emergence 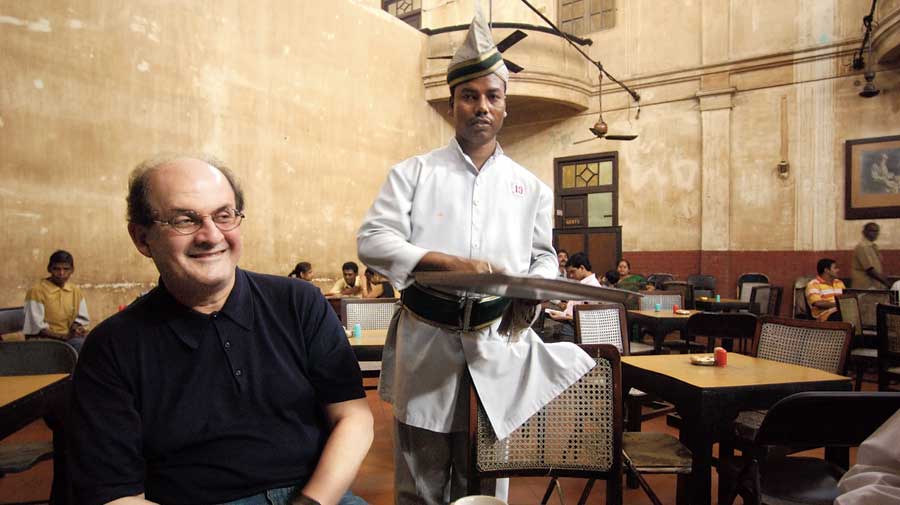 Salman Rushdie at the Indian Coffee House on College Street in Calcutta in 2004. Last month, in the run-up to the Bengal elections, the Coffee House had witnessed an attempt by the Right wing to usurp the platform for debate and free-thinking. As Rushdie has now written in The Guardian about finding “hope in the determination of India’s women and college students to resist” sectarianism and “dismiss the darkness”, it was a young group led by a woman who had stood up to the rabble-rousers last month in the Coffee House.
Telegraph file picture
Amit Roy   |   London   |   Published 05.04.21, 02:11 AM

Salman Rushdie has used the 40th anniversary of the publication of Midnight’s Children to express regret that “India is no longer the country of this novel”.

Many literary critics in the West say that Midnight’s Children is possibly the most profound novel to come out of India since Independence. It won both the Booker Prize and the James Tait Black Memorial Prize in 1981, and was awarded the Booker of Bookers and the Best of the Booker in 1993 and 2008, respectively, to celebrate the Booker Prize’s 25th and 40th anniversaries.

In a long article in The Guardian newspaper on Saturday, the author describes the five years it took him to write the novel and how India has changed in the four decades since its emergence: “Forty years is a long time. I have to say that India is no longer the country of this novel.”

He goes on: “When I wrote Midnight’s Children I had in mind an arc of history moving from the hope — the bloodied hope, but still the hope — of Independence to the betrayal of that hope in the so-called Emergency, followed by the birth of a new hope. India today, to someone of my mind, has entered an even darker phase than the Emergency years.”

His comments not only mark the 40th anniversary of the novel’s publication; they coincide with the Assembly elections in Bengal, Assam, Kerala, Tamil Nadu and Puducherry.

Although Rushdie’s target is not specifically identified, there is no doubting who his words are directed at.

Advertisement

...The popularity of the regime in spite of it all, or, worse, perhaps because of it all — these things encourage a kind of despair
- Salman Rushdie in The Guardian


“The horrifying escalation of assaults on women, the increasingly authoritarian character of the state, the unjustifiable arrests of people who dare to stand against that authoritarianism, the religious fanaticism, the rewriting of history to fit the narrative of those who want to transform India into a Hindu-nationalist, majoritarian state, and the popularity of the regime in spite
of it all, or, worse, perhaps because of it all — these things encourage a kind of despair.”

In the novel, his principal protagonist, Saleem Sinai, is born “handcuffed to history” and with a protruding nose, at the stroke of midnight hour as India becomes independent but is swapped with another baby from a wealthier family in a Bombay nursing home.

“When I wrote this book I could associate big-nosed Saleem with the elephant-trunked god Ganesh, the patron deity of literature, among other things, and that felt perfectly easy and natural even though Saleem was not a Hindu,” writes Rushdie in the UK-based newspaper.

“All of India belonged to all of us, or so I deeply believed,” he says. “And still believe, even though the rise of a brutal sectarianism believes otherwise. But I find hope in the determination of India’s women and college students to resist that sectarianism, to reclaim the old, secular India and dismiss the darkness. I wish them well. But right now, in India, it’s midnight again.”

That he believes India has entered a period even darker than the Emergency is also spelt out in an interview he has given to CNN to discuss his novel.

He personally was not like Saleem Sinai but they had grown up in post-Partition Bombay, which he remembers as “a beautiful city then and I think happier than it is now without really any measurable communal discord”.

He recalls “how little religion was a subject, it just really wasn’t a very big subject. And that, amongst my immediate friends, they were people of every religion and no religion, and they were Hindus, Christians, Muslims, Sikhs, every kind of child.”

He laments: “The non-sectarian atmosphere of my youth has very largely disappeared. The country has a lot more trouble between the majority Hindu community and the minority communities. I would call it a sad time, because the India that people like me were brought up in and kind of bought into, which was the Nehru-Gandhi idea of the secular nation, that idea seems to be crumbling.”

If he were to write the novel today, he would write a darker tale: “I hate to say it, but I think things are worse than they used to be.”

Rushdie, who has been involved with Pen America, an organisation that fights to protect free expression worldwide, says he wants “to fight for the principle of free speech, which is the rock on which free societies stand. Far from the world getting more accustomed to free speech, it seems free speech is more imperilled these days than it used to be.”

In his article in The Guardian, he has given an insight into the cosmopolitan structure of Midnight’s Children and also the way he has used the English language. He had considered the great books in the West as possible models.

“But I was also thinking about another kind of capaciousness, the immense epics of India, the Mahabharata and Ramayana, and the fabulist traditions of the Panchatantra, the Thousand and One Nights and the Kashmiri Sanskrit compendium called Katha-sarit-sagar (Ocean of the Streams of Story).

“I was thinking of India’s oral narrative traditions, too, which were a form of storytelling in which digression was almost the basic principle; the storyteller could tell, in a sort of whirling cycle, a fictional tale, a mythological tale, a political story and an autobiographical story; he — because it was always a he —could intersperse his multiple narratives with songs and keep large audiences entranced,” he wrote.

“I loved that multiplicity could be so captivating. Young writers are often given a version of the advice that the King of Hearts gives the White Rabbit in Alice’s Adventures in Wonderland, when the Rabbit becomes confused in court about how to tell his story: ‘Begin at the beginning,’ the King said, very gravely, ‘and go on until you come to the end; then stop.’ It was inspiring to learn, from the oral narrative masters of, in particular, Kerala in south India, that this was not the only way, or even the most captivating way, to go about things.”

Rushdie: a time to listen

Tamil Nadu polls: An ace up the BJP’s sleeve