Shoulder to shoulder, for 620km 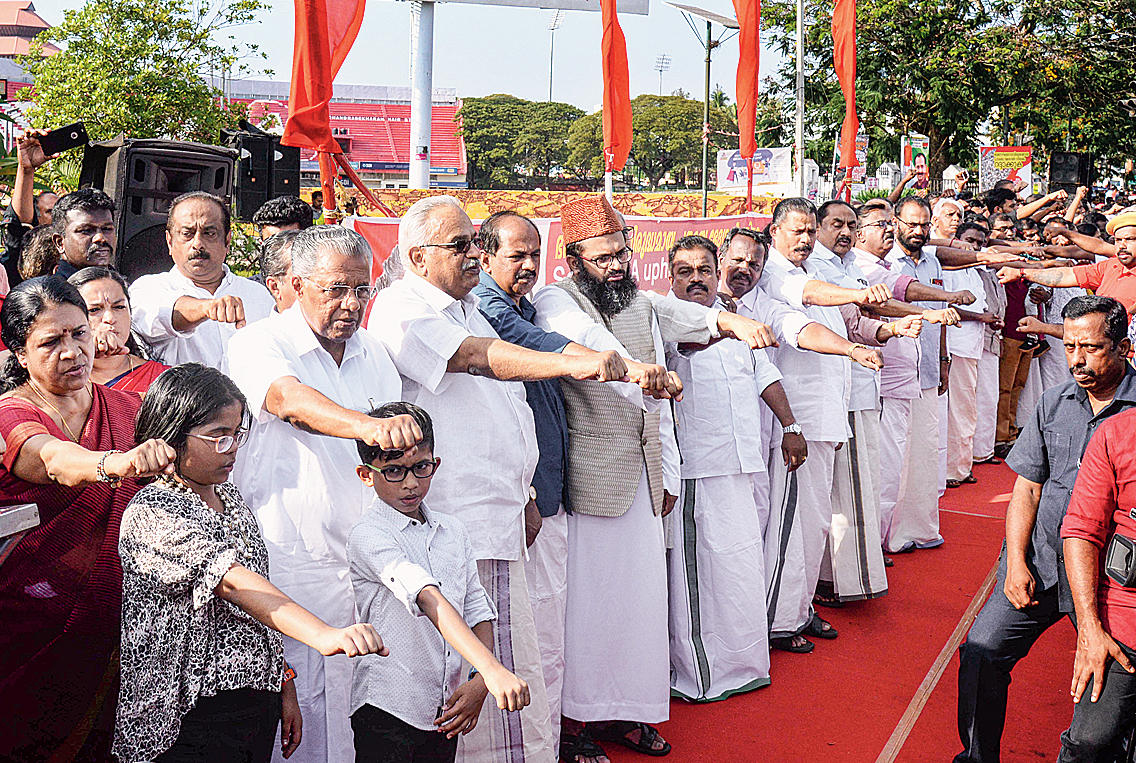 About 70 lakh people lined up to form a 620km human chain across the length of Kerala on Republic Day, read out the Preamble to the Constitution and took an oath to preserve the country’s secular and democratic character.

Men and women, young and old participated in the Great Human Chain organised by the state’s ruling Left Democratic Front, mostly along a national highway.

Although the CPM-led front had invited every opponent of the new citizenship regime, the Congress-led United Democratic Front stayed away.

However, a large number of Muslim and Christian clerics took part, as did many writers and film industry professionals.

The “trial” of the human chain — a series of simultaneous local checks to ensure a continuous chain had been formed — took place around 3.40pm, ten minutes behind schedule as people were still arriving.

At 4pm sharp, leaders from the LDF constituents read out the Preamble in unison at 250 points. This was immediately followed by the oath to protect the Constitution and its values, before the programme ended with a public meeting at each of the 250 centres.

At many places, especially CPM strongholds such as Kannur, Kollam and Alappuzha, the human chain became a human wall of multiple rows or chains, thanks to the heavy turnout.

A suspected RSS activist tried to play spoiler in Kollam, turning up with a knife and shouting “Vande Mataram” before slashing his wrist.

Ajosh, 27, was just 10 metres from the spot where state ministers J. Mercykutty Amma and A. Raju and actor-politician Mukesh were taking the oath. He was taken to the district hospital, where doctors found he had cut three veins.

Chief minister Pinarayi Vijayan, who led the protest at the Martyrs’ Column in Palayam, Thiruvananthapuram, told the gathering the protests against the Citizenship (Amendment) Act, National Register of Citizens and the National Population Register must continue after Sunday.

“It’s not yet time to rest. The citizenship law will endanger the Constitution and destroy peace in the country since their (the BJP’s) intention is to destroy secularism,” he said.

“We have already declared that Kerala is not the place to accept (the new citizenship regime). But we need to make our contribution to the nationwide protest until this citizenship law is withdrawn.”

Vijayan did not mention the UDF’s absence or his confrontations with governor Arif Mohammed Khan who has been attacking the state government for getting a resolution passed in the Assembly against the citizenship amendment and challenging the legislation in the Supreme Court.

Malayalam writer T. Padmanabhan, who addressed the human chain in Kannur, chided the UDF for skipping the event.

Filmmaker Ashiq Abu, who participated in Ernakulam, told reporters: “This human chain across the length of Kerala is a visual representation of the protest that only the LDF could have accomplished.”

Even the UDF pocket boroughs responded enthusiastically, with both north and south Kerala witnessing similar turnouts.

In a first, Latin Catholic churches and mosques across the state had the Preamble to the Constitution read out after the hoisting of the national flag in the morning to mark Republic Day.

After the Sunday mass, the Latin churches read out an oath they had drafted to protect the Constitution. The mosques followed a similar schedule.

The state wakf board had earlier sent notices to all the mosques asking them to unfurl the Tricolour and take a pledge to protect the Constitution.