Rath yatra commences with curfew in Gujarat amid Covid concerns

Instead of the usual cavalcade of around 100 trucks, decked up elephants, akhadas and singing troupes, this year's procession consisted of only three chariots 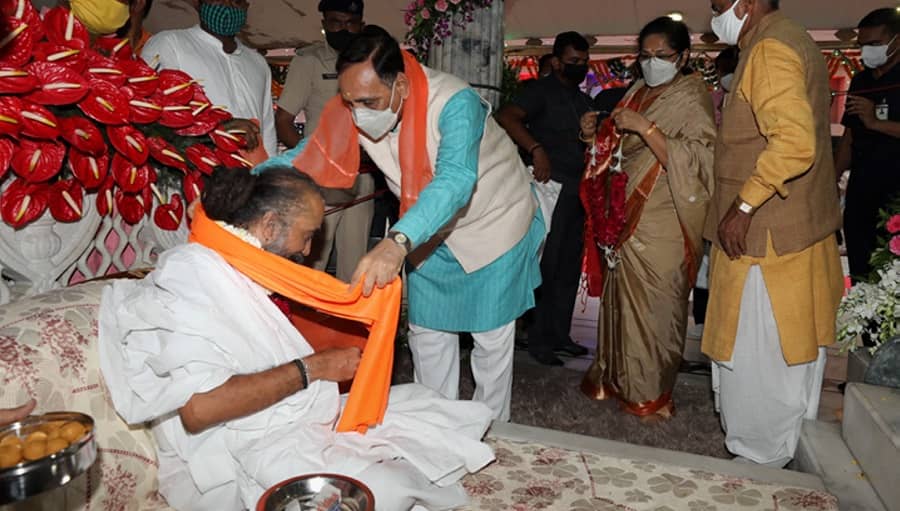 Gujarat CM Vijay Rupani greets head priest at Jagannath Temple on the eve of the annual Rath Yatra festival, in Ahmedabad on Sunday.
PTI
Our Bureau, PTI   |   Ahmedabad   |   Published 12.07.21, 10:08 AM

The 144th annual rath yatra of Lord Jagannath began in Gujarat's Ahmedabad city on Monday morning, but it was devoid of the usual festive fervour and crowds due to the curfew imposed on its route to bar people from taking part in it in view of the COVID-19 pandemic.

Instead of the usual cavalcade of around 100 trucks, decked up elephants, akhadas and singing troupes, this year's procession consisted of only three chariots, pulled by nearly 100 youths from the Khalasi community, and four to five other vehicles.

To prevent people from gathering on roads for a glimpse of the deities, a curfew has been imposed on the entire 19-km route of the procession from early morning till afternoon, Minister of State for Home Pradeepsinh Jadeja told reporters.

The journey of the chariots of Lord Jagannath, his brother Balbhadra and sister Subhadra began from the 400-year-old Jagannath temple in Jamalpur area here around 7 am, after Gujarat Chief Minister Vijay Rupani and Deputy CM Nitin Patel performed 'Pahind Vidhi'- a symbolic ritual of cleaning the way for the 'raths' (chariots).

Before the idols of the deities were placed on the chariots, Union Home Minister Amit Shah visited the temple at around 4 am and took part in the 'mangla aarti'.

According to the city police, around 23,000 armed personnel, including nine companies of the Central Armed Police Forces, have been deployed along the route to prevent any unwarranted situation, as the procession passes through some communally sensitive areas also.

Although the rath yatra would cover the entire 19-km route, the procession this time would be a shorter affair in terms of duration as the authorities have planned to conclude it in four to five hours as against the usual time of around 12 hours.

Before the COVID-19 outbreak last year, lakhs of people used to gather along the route on 'Ashadhi Beej' every year to catch a glimpse of the decorated elephants and tableaux moving around in some 100 trucks.

The procession used to come back to the Lord Jagannath temple after covering a distance of 19 km in about 12 hours, which included an hour-long lunch break at Saraspur.

However, this time, authorities have ensured there is no large gathering in Saraspur.

Since people from other districts and those living in western parts of the city also flock the route to watch the procession, police are regulating the traffic movement on all bridges to stop people from reaching near the route.

The government also appealed to people to watch the live telecast of the rath yatra on television.

Last year, only a symbolic rath yatra was organised in the premises of the Lord Jagannath temple here after the Gujarat High Court denied permission for the usual public procession due to the pandemic.