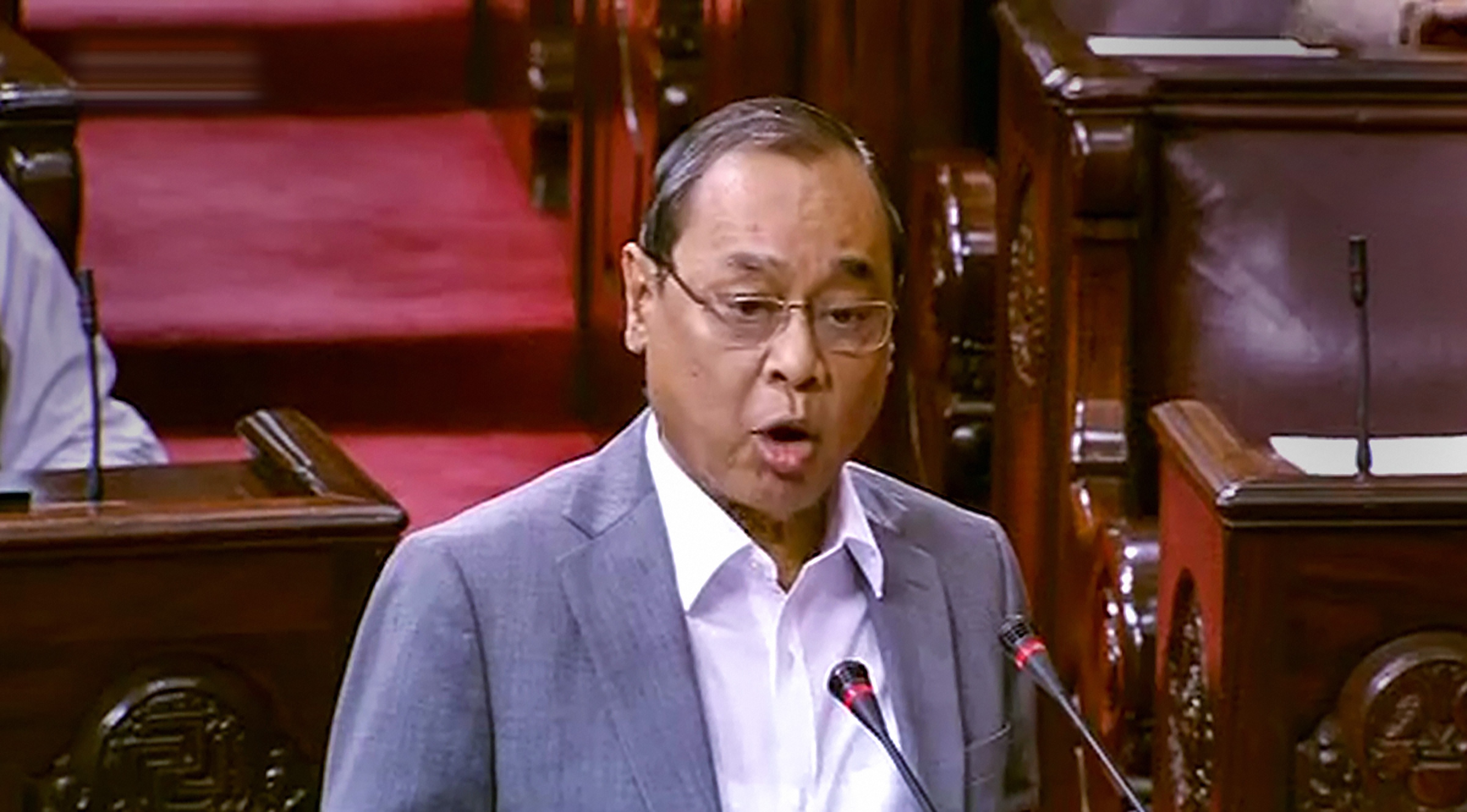 Former Chief Justice of India Ranjan Gogoi on Thursday took oath as a nominated member of Rajya Sabha amidst unprecedented scenes of Opposition members shouting slogans and walking out of the House.

This is the first time ever that the House has witnessed slogan shouting and walkout during oath taking.

Gogoi, 65, who retired as the Chief Justice of India in November last year after a tenure of 13 months, took oath in English in the name of God.

As his name was called for oath taking, Congress and Left members started shouting slogans like 'Shame on You' and 'Deal'.

Chairman M. Venkaiah Naidu ordered that the slogan shouting will not go on record.

As Gogoi took oath, Congress, Left and their allies shouted slogans and staged a walk out from the House.

Naidu said it was not fair to shout slogans. 'It is very unbecoming of members of Parliament.'

'No, this is not the way. Nothing will go on record. (It is) very unfair, very unfair,' Naidu said as Gogoi completed his oath.

After taking oath, Gogoi walked up to the chair to greet Naidu, who responded to his greetings with folded hands.

Naidu said members have the liberty to express their views outside the House on the issue.

'You should not do anything in the House. Whatever views you have you are at liberty to express outside,' he said.

Law ,inister Ravi Shankar Prasad, who was among the first to greet Gogoi when he entered the House minutes before the proceedings began, said what opposition members did was 'grossly unfair'.

'This House has a great tradition of having many eminent persons coming from diverse fields including former justices nominated by those who have shouted today,' Prasad said.

'Hon'ble member Gogoi, who has taken oath today, will surely contribute his best as a nominated member. And it was grossly unfair to do like this,' he said.

Naidu said, 'We must respect a member.'

He was nominated in the vacancy created after the retirement of K.T.S Tulsi.

Earlier, Gogoi entered the House from the chariman's chamber and greeted members present with folded hands.

Prasad greeted him with a loud 'welcome Gogoi dada'.

Shortly thereafter he was escorted to his designated seat in the second last row where he sat quietly alongside Sonal Mansingh, another nominated member of the House.

During Gogoi's 13-month tenure, the Supreme Court delivered landmark judgements in the Ayodhya case, on the decriminalisation of homosexuality, the entry of women in Kerala's Sabarimala temple and the Rafale jet deal along with Assam's National Register of Citizens (NRC).

The Congress has argued that Gogoi's nomination to Rajya Sabha 'within four months' of his retirement will shake the confidence and faith people have in the independence of the judiciary.

The party has also tried to distinguish between Gogoi's nomination and that of some of his predecessors' entry into the Rajya Sabha 'six to seven years' after their retirement.