The President hailed the Nitish Kumar govt for having accorded legal status to one of the Directive Principles of State Policy, which have been enshrined in the Constitution 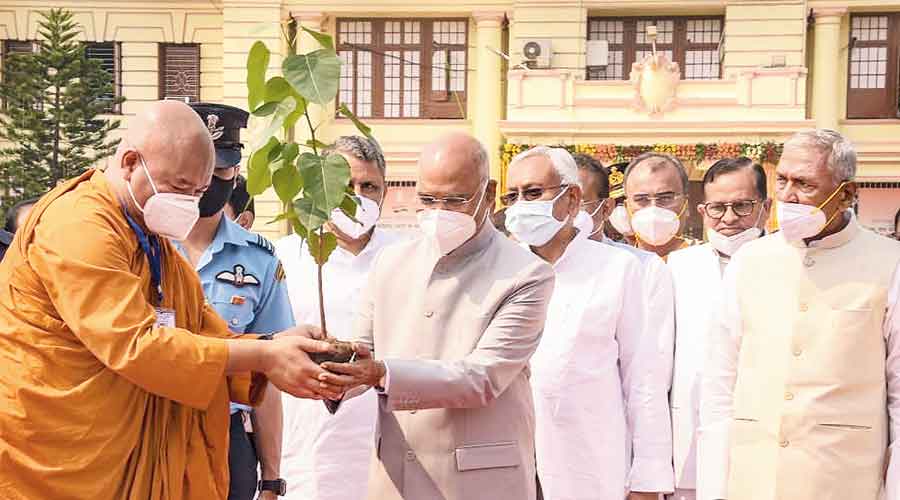 President Ram Nath Kovind plants a Mahabodhi sapling on the premises of the Bihar Vidhan Sabha in Patna on Thursday during the centenary celebrations of the Assembly building. Bihar governor Fagu Chauhan and chief minister Nitish Kumar are also seen.
PTI
PTI   |   Patna   |   Published 22.10.21, 12:31 AM

President Ram Nath Kovind on Thursday gave a thumbs-up to Bihar’s prohibition law, hailing the Nitish Kumar government for having accorded legal status to one of the Directive Principles of State Policy, which have been enshrined in the Constitution.

Addressing a function organised here on the occasion of 100 years of the Bihar Vidhan Sabha Bhavan — the sprawling building that houses the two legislative bodies — Kovind recalled with pride that he was part of the exercise in his capacity as the then governor of Bihar.

Fondly remembering his association with the state where his gubernatorial assignment was nearly two years long, the President made an oblique reference to the Emergency and hailed “the extraordinary leadership of Jayaprakash Narayan, a son of Bihar”, when there was an “assault on our democratic values 25 years after India became a republic”.

He also saluted the contribution of the land towards establishing an egalitarian political order recalling that “Chandragupta Maurya, born to a poor woman, went on to become the emperor of Magadha” and late socialist Karpoori Thakur, who became the chief minister of Bihar in 1970, was considered an epitome of integrity and probity.

Noting that the state has been making rapid economic growth in recent times, Kovind also pointed to the entrepreneurial energy exhibited by the Bihari diaspora who have made Chhath a “global festival, known from Nawada to New Jersey and from Begusarai to Boston”.

“The Directive Principles of State Policy call for protecting public health through measures that prevent consumption of intoxicants. It is a Gandhian ideal. The Bihar Assembly took the important step of passing a bill based on this constitutional provision and I had the opportunity to give my assent (as governor) and pave way for its becoming a law,” the President said.

The prohibition law was introduced in April, 2016 in line with an electoral promise by Nitish during the Assembly polls held the previous year.

Kovind, who became the President in 2017, was appointed as the governor of Bihar in 2015 and held the post till he was chosen for election to the highest constitutional office.

The President also recalled the important role played by the “luminaries of Bihar” in drafting the Constitution.

“Sarvapalli Radhakrishnan had once pointed out that Sachchidanand Sinha, who was the first interim president of constituent assembly, and Rajendra Prasad, who headed the body 1946 onwards, were both from Bihar which is characterised by its mriduta (sweetness),” said Kovind.

“The soil of Bihar is ratnagarbha (a treasure trove of jewels). I have always been moved by the affection showered by its people. And that is why a visit here always brings me delight,” said the President who has been here on a three-day tour since Wednesday.

He urged all the legislators in the state to continue striving towards making Bihar a state known for its learning, culture and prosperity.

Earlier, the President laid the foundation stone of a commemorative pillar, which is being constructed to mark the centenary of Bihar Vidhan Sabha Bhavan. He planted a Bodhi sapling, which was consecrated by Buddhist monks who had arrived from Bodh Gaya on the occasion.