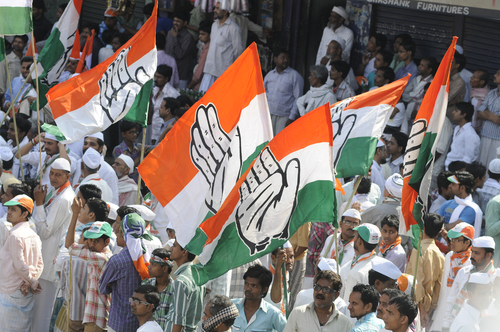 The Manipur Pradesh Congress Committee has issued show-cause notices to two of its MLAs for allegedly cross-voting in favour of the BJP candidate in the recently-concluded election to the state's lone Rajya Sabha seat.

"You have deliberately breached and acted against the decision of the Indian National Congress (INC) by indulging in cross-voting in favour of the BJP candidate in the recent Rajya Sabha election held on June 19 and this has not only violated the decision of our party to support our candidate but is also detrimental in maintaining the party principle," the notices read.

Sanajaoba, the titular king of Manipur, had received 28 votes, while Babu had secured 24.

The Congress alleged that Okram had participated in the felicitation of the BJP candidate, who won the election, organised at chief minister N. Biren Singh's bungalow.

The legislator from Wangkhei is the nephew of former chief minister Okram Ibobi Singh, who is also the leader of the Congress Legislature Party (CLP).

Rajkumar was accused of accompanying the chief minister to New Delhi on a chartered flight on June 30 without the permission of the party.

The two MLAs could not be reached for comments.

The Manipur unit of the Congress has sought an explanation from the duo within two weeks for their "anti-party" activities.