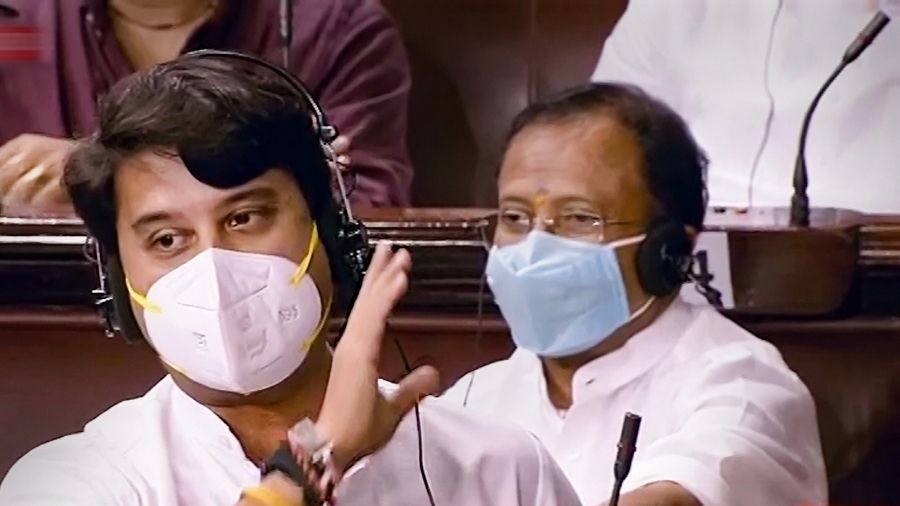 The Rajya Sabha proceedings were adjourned till Thursday amid continuous protests by opposition parties over the Pegasus snooping controversy, and issues of farm laws and price rise.

However, the Upper House passed the Airports Economic Regulatory Authority of India (Amendment) Bill, 2021, which seeks to encourage smaller airports to expand air connectivity to relatively remote and far-flung areas.

The House passed the bill after a brief discussion amid protest and sloganeering by the opposition over various issues, including the Pegasus snooping controversy and farm laws.

The Lok Sabha had passed the Airports Economic Regulatory Authority of India (Amendment) Bill, 2021 on July 29.

When the Upper House assembled after a 15-minute adjournment at 2:56 pm, the opposition continued to protest.

Deputy Chairman Harivansh Narayan Singh, who was in the chair, called members for debate on the bill.

After a short debate and a brief reply from the Civil Aviation Minister Jyotiraditya Scindia, the Airports Economic Regulatory Authority of India (Amendment) Bill, 2021 was passed with a voice vote.

Immediately after that the deputy chairman adjourned the House till Thursday 11 am.

As opposition members continued raising slogans, the deputy chairman adjourned the proceedings of the House for 15 minutes till 2.56 pm.

He also warned members not to record proceedings on mobile phones as it was against the rules of the Rajya Sabha.

Earlier, the proceedings of the House were adjourned till 2 pm as slogan-shouting MLAs of the TMC and other opposition parties trooped into the Well, some holding placards, to demand a discussion on the issue of Pegasus spyware being used to snoop on opposition leaders, government critics and journalists.