Eight Rajya Sabha MPs suspended for the rest of the session 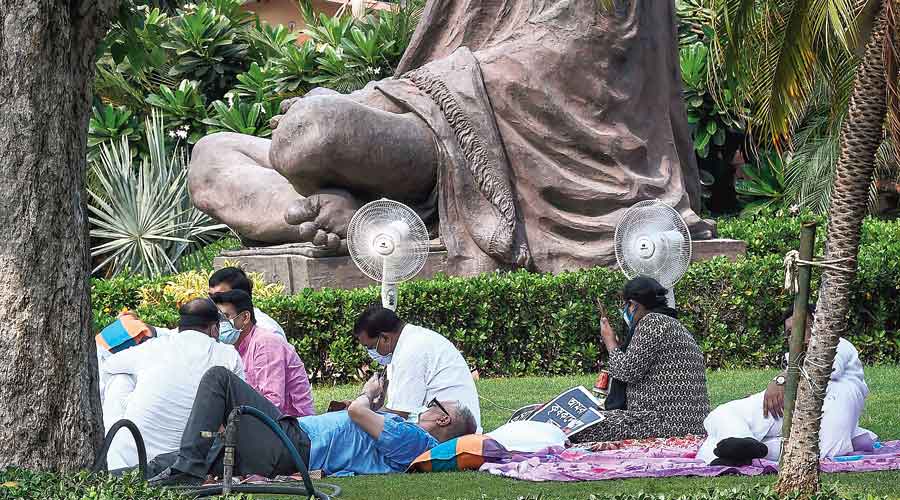 Suspended Rajya Sabha MPs staging a dharna near the Gandhi statue on the premises of Parliament House on Monday
PTI
Our Special Correspondent   |   New Delhi   |   Published 22.09.20, 02:20 AM

Eight Rajya Sabha MPs from four parties who had led the protests against the farm bills in the House were suspended on Monday for the rest of the session by chairperson M. Venkaiah Naidu, who disallowed the Opposition’s no-confidence motion against his deputy Harivansh.

The MPs stayed put in the House, despite several reminders from the Chair that the rules mandate they leave immediately, resulting in successive adjournments. As a result, not much business was transacted in the Rajya Sabha, which adjourned for the day an hour ahead of schedule.

The eight MPs then moved to the front lawns next to the Mahatma Gandhi statue to stage an indefinite dharna. Leaders of several Opposition parties and even the TRS — which usually stands with the government on contentious issues — joined their protest through the day against the “assassination of parliamentary democracy’’.

As the sit-in continued into the night, several MPs, including Ahmed Patel of the Congress and the RJD’s Manoj Jha, joined their suspended colleagues in solidarity. Sanjay Singh of AAP and Dola Sen of Trinamul Congress, who are among the suspended eight, kept spirits high with protest songs.

The Opposition is also demanding that President Ram Nath Kovind return the two farm bills to the Rajya Sabha for proper consideration and approval under Article 111 of the Constitution.

The Opposition will seek an appointment with the President to present their case, a senior  leader said.

The bills were passed on Sunday by voice vote after demands for a division (paper or electronic vote) were not accepted. The Opposition’s contention is that proper procedure was not followed by the presiding officer during the passage of the bills, resulting in the ruckus.

On Monday, the day began in the Rajya Sabha on a quiet note with Chairman Naidu getting the papers listed tabled and allowing special mentions for about 20 minutes.

Advertisement

Prime Minister Narendra Modi showered praise on Rajya Sabha Deputy Chairman Harivansh after he met and offered tea to the Opposition MPs sitting on dharna in Parliament complex on Tuesday morning. Harivansh’s "inspiring" and "statesmanlike" conduct will make every democracy lover proud. To personally serve tea to those who "attacked and insulted" him a few days ago as well as those sitting on dharna, Modi tweeted, shows that Harivansh has been blessed with a humble mind and a big heart. It shows his greatness, the prime minister said.
-


Thereafter, referring to the pandemonium during which mikes were broken and MPs clambered on to the parliamentary reporters’ table to protest, he said: “I was so pained yesterday. All social distancing and Covid-19-related precautions were violated by some members in the House yesterday. It pained me a lot because of what happened yesterday. It defies logic. It was really a bad day for the Rajya Sabha.’’

Defending the deputy Chairman, Naidu said division could not be taken up because of disruptions. “If marshals were not called on time, what would have happened to the deputy Chairman? I am worried. He says that he was abused with objectionable words,’’ he said.

Citing the record of Sunday’s proceedings, Naidu said: “The deputy Chairman had persistently requested the members to go to their seats and participate in the debate and move amendments. Obviously, in view of the continuous disruptions in the House, the division could not have taken place.’’

Before allowing the government to move the motion for suspension of Rajeev Satav, Syed Nasir Hussain and Ripun Bora of the Congress, Derek O’Brien and Dola Sen of Trinamul Congress, Elamaram Kareem and K. K. Ragesh of the CPM and Sanjay Singh of AAP, Naidu declared the Opposition’s no-confidence motion inadmissible as 14 days’ notice had not been given as is mandated under Article 90(c) of the Constitution.

The disciplinary action against the eight MPs has been taken under Rule 255 and 256. The government’s motion did not refer to any rule.

The motion moved by junior parliamentary affairs minister V. Muraleedharan said: “That the following members be suspended from the services of the House for the remaining part of the current session for their unruly behaviour especially with the Chair and their gross disorderly conduct in violation of the rules and etiquettes of Rajya Sabha, thereby bringing disrepute to this august House and causing insult to the Office of Hon. Deputy Chairman, yesterday, i.e. the 20th September, 2020.’’

“An eminent Indian who hails from Bihar, who has made a mark not only in the country but the globe, was being humiliated and Congress party and the RJD were encouraging this in the most unabashed manner,” Prasad said, speaking on behalf of the government.

“The people of Bihar will give a reply of this. The country too will give. This will not be tolerated,” he added.

“I want to say this very clearly. We don’t want to make it a political issue but the way such an intellectual son of Bihar, editor, journalist was humiliated… People of Bihar are hurt and the Opposition will have to face it,” Prasad said.

Bihar is scheduled to vote in November. The minister hails from the state.