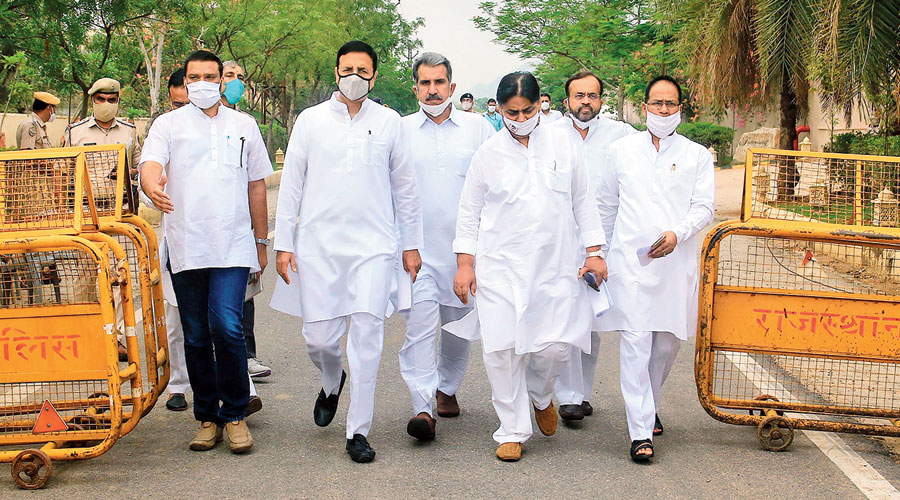 The Sachin Pilot camp on Friday received some relief from Rajasthan High Court that directed the Assembly Speaker not to act on a disqualification petition till Tuesday evening, but the political conflict got murkier with the Congress demanding the arrest of a Union minister for alleged involvement in the conspiracy to destabilise the state government.

In court, Pilot camp lawyers Harish Salve and Mukul Rohatgi argued that the dissenting legislators hadn’t done anything illegal and had not indulged in anti-party activities and demanded that the notice for disqualification be withdrawn.

Salve said a party whip was not violated by actions outside the Assembly.

Salve also asserted that MLAs had the freedom of speech to express their views, and that complaining to the party’s central leadership against the alleged dictatorial attitude and corruption of chief minister Ashok Gehlot was not a revolt.

As Abhishek Manu Singhvi, representing the government, could not complete his argument, the court asked the Speaker not to take a decision till Tuesday evening. The Speaker promptly gave a commitment to comply with the request.

The Congress, however, held a media conference early in the morning before the court hearing to contest the claim that the dissenting MLAs had not indulged in anti-party activities and that it had been an innocent case of raising concerns with the party high command.

Referring to reports about two audio tapes circulating on social media since Thursday night, Congress communications chief Randeep Surjewala said: “The Madhya Pradesh government was pulled down in the midst of the corona crisis through a similar modus operandi. We have seen such operations in Karnataka, Arunachal, Goa, Uttarakhand, Manipur….”

Surjewala added: “The same ugly conspiracy to destabilise another elected government is being hatched in Rajasthan. Conversations recorded clearly show money is being offered to buy MLAs. Union minister Gajendra Singh Shekhawat is heard talking to Congress MLA Bhawarlal Sharma and one middleman, Sanjay Jain, discussing the numbers required to topple the government and other details of the operation. An FIR should be lodged and Shekhawat should be arrested immediately.”

Surjewala read out a transcript of the purported conversations.

Congress sources said this was just the first instalment and more damning evidence was available both in the form of audio and video clips.

The Congress chief whip in the Rajasthan Assembly, Mahesh Joshi, who had first lodged a complaint with the Special Operations Group (SOG) of the state police, filed a fresh FIR on Friday seeking an investigation into the alleged toppling game.

An SOG team went to Manesar in Haryana, where the dissident MLAs are holed up in a hotel. They were stopped outside the hotel by the police in the BJP-ruled state for about an hour, before being allowed in. They left within minutes after being told at the reception that MLA Bhawarlal Sharma was not there, adds PTI.

Surjewala demanded a thorough inquiry to find out how many persons were involved, who was the mastermind in Delhi of the alleged operation, where from had the cash came and how was it delivered.

“The murderers of democracy must be exposed,” he said. While central minister Shekhawat dismissed the tapes as fake, Rajasthan BJP chief Satish Punia laughed away the allegations, saying: “Surjewala was talking as if he is the SOG chief and the authenticity of the tapes has been established.”