Rajasthan is paying for internal discord within Cong: Vasundhara 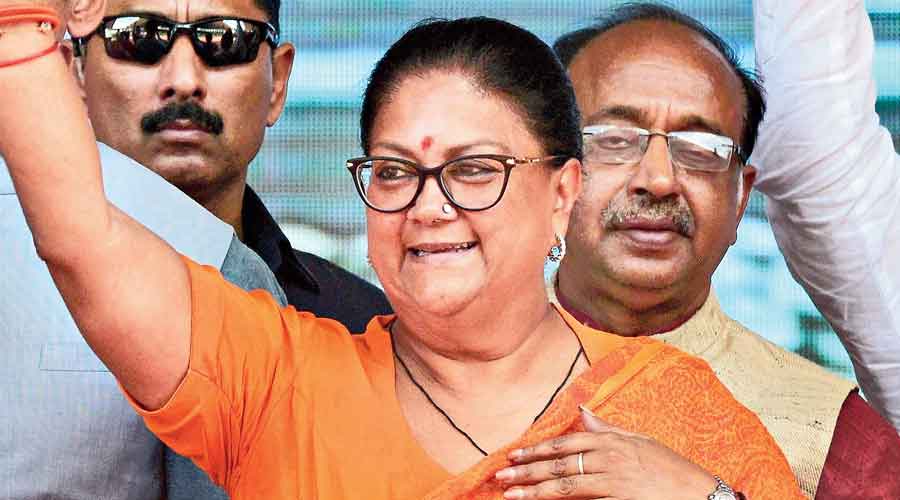 Former chief minister Vasundhara Raje Scindia on Saturday broke her silence on the political upheaval in Rajasthan, saying the state was “paying for internal discord within the Congress”.

The BJP heavyweight’s Hindi tweet lacked much vitriol against the rival and seemed born out of political compulsion, coming two days after a BJP ally accused her of helping the Ashok Gehlot government stay in power.

It’s been speculated that the crisis in the Congress was engineered from Delhi by the BJP central leadership, which hoped to replace Vasundhara with Sachin Pilot as the chief ministerial candidate if his rebellion succeeded in toppling Gehlot’s government.

“It’s unfortunate that the people of Rajasthan are paying for internal discord within the Congress,” Vasundhara said in a tweet that carried an image of her signature.

She regretted that at a time people were reeling under challenges like the Covid-19 epidemic and a locust invasion, they were being made to suffer because of Congress infighting. Finally, she mildly censured the Congress for blaming its own crisis on the BJP.

“The Congress is trying to put the blame on the BJP and the BJP leadership. For the government, the interests of the people alone should be paramount,” she said.

While her initial silence triggered conjecture, Hanuman Beniwal, a Rajasthan MP from BJP ally Rashtriya Loktantrik Party, posted a tweet on Thursday accusing Vasundhara of helping out the Gehlot government.

He claimed he had proof that Vasundhara had called up Congress MLAs close to her and asked them to support Gehlot rather than Pilot.

Beniwal has so far not furnished any proof, causing whispers that his allegation was a mischievous one, aimed at smearing a state leader the central leadership had little love for.

Vasundhara is known to represent a rare breed within today’s BJP that has the courage to stand up to the all-powerful Narendra Modi-Amit Shah duopoly.

Her statement with its gentle rap on the Congress therefore appeared to have been forced by the need to say something to deflect the charge that she was secretly working against Delhi’s efforts to oust the Gehlot government.

While her 3.25pm tweet made no mention of Beniwal’s allegation, a second tweet she posted around 6.30pm made an oblique allusion to it.

“Some people are trying to spread illusions about the political developments in Rajasthan without any factual basis,” she wrote.

“For the past three decades, I have been serving the people as a loyal worker of the party and have stood with the party and its ideology.”

Vasundhara’s rather sedate statements contrasted with the way the central BJP went hammer and tongs at the Congress on Saturday, demanding a CBI probe into “unconstitutional phone-tapping” by the Gehlot government.

The Congress has used audio tapes to claim that senior BJP leaders, including Union minister Gajendra Singh Shekhawat, were involved in horse-trading to bring its government down in Rajasthan.

“Was phone-tapping done? Did the Congress government in Rajasthan use unconstitutional ways to save themselves when they found themselves cornered?” BJP spokesperson Sambit Patra thundered, demanding a CBI probe.

He, however, denied any BJP role in destabilising the Gehlot government.