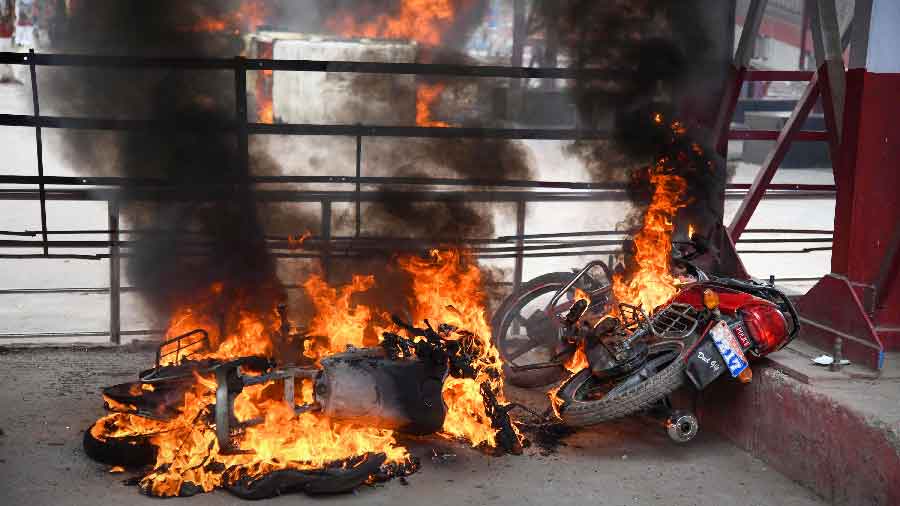 A man was shot dead in police firing in Telangana's Secunderabad, trains went up in flames, and public and private vehicles attacked, as railway stations and highways turned into battleground in many states on Friday amid burgeoning protests against Agnipath, the contentious defence recruitment scheme.

Over 300 trains have been affected and more than 200 cancelled so far due to the protests, the Railways said, reflecting the enormity of the agitation.

Coaches of seven trains have so far been set ablaze by protesters, officials said, adding carriages of three running trains in the East Central Railway (ECR), headquartered in Bihar's Hajipur, and one empty rake in Kulharia, also in the same zone, were damaged by protestors.

One coach of a train was also damaged in the washing line at Uttar Pradesh's Ballia. So far, 64 trains were short terminated in ECR.

As the depredations against the recruitment scheme continued for the third day across large parts of India, from Uttar Pradesh to Telangana and Bihar to Madhya Pradesh, Rajnath Singh, Amit Shah and Army chief Gen Manoj Pande tried to assuage the concerns of the agitators with little success.

The Army chief said the government's Thursday night decision to raise the upper age limit to 23 years from 21 under the scheme in 2022 will provide an opportunity to youths who were preparing to join the force but couldn't in the last two years.

The Centre's decision to increase the upper age limit will benefit a large number of youth, Shah said. He added that the recruitment process in the Army had been affected for the last two years due to the Covid pandemic and Prime Minister Narendra Modi took a sensitive decision by showing concern for the youth of the country.

"I heartily thank Prime Minister Shri @narendramodi for his concern and sensitivity towards the future of the youths. I appeal to the youth that the process of recruitment in the army is going to start in a few days. They start their preparation for it," Rajnath Singh tweeted, calling the scheme a "golden opportunity" for the youth.

But the protests spread, seemingly uncontrolled, with crowds squatting on tracks and highways, pelting trains and buses with stones, toppling vending kiosks at train stations and burning used tyres on tracks.

Fiery orange flames leapt out of the windows of trains at Secunderabad, and Lakhisarai and Samastipur in Bihar, sending thick plumes of black smoke into the sky that could be seen from several kilometres away.

Broken tubelights, benches and stones littered several railway stations across the country. Policemen in anti-riot gear were seen chasing away the protesters, hundreds of whom were rounded up.

Besides targeting railway properties, the protesters attacked the house of Deputy Chief Minister Renu Devi and the car of a BJP MLA in Bihar. State BJP president Sanjay Jaiswal's residence in Bettiah town was also vandalised but the leader claimed the attackers were not job aspirants.

One person was fatally injured when Railway Protection Force (RPF) personnel fired to disperse the rampaging protesters at Secunderabad station. The injured are being treated in the state-run Gandhi Hospital.

The scenes of chaos unfolded in Uttar Pradesh's Ballia, where the agitators shouting Bharat Mata ki Jai and Agnipath Vapas Lo set an empty train on fire and vandalised a few other trains, provoking a baton charge.

Protests also erupted in Varanasi, Firozabad and Amethi, causing damage to government buses and other symbols of public property.

Following the violent protests in Palwal, the Haryana government has suspended mobile internet and SMS services for 24 hours in Ballabhgarh area of Faridabad district as a precautionary measure. Protests also broke out in Hisar, Fatehabad and Jhajjar in Haryana.

The national capital was relatively quiet but Metro travel was disrupted with members of the Left-affiliated All India Students' Association staging demonstrations. The entry and exit gates of some Delhi Metro stations had to be closed.

Bihar Chief Minister Nitish Kumar's JD(U) made a fresh plea to the Centre for an immediate review of the Agnipath' scheme, and to assure protesting youngsters that their future will not be adversely affected by the new policy.

The announcement of Agnipath' scheme by the Centre has triggered resentment among youths of Bihar and other parts of the country. The Centre should, therefore, think of an immediate review ( avilamb punarvichar') of the scheme. If that is not possible, it must assure the youngsters that the scheme is not going to adversely affect their future, JD(U) national president and MP Rajiv Ranjan Singh said.

While the government defended the scheme, saying it will secure the future of youths and help maintain a youthful profile of the armed forces, opposition leaders maintained it would adversely impact the functioning of the armed forces.

"The prime minister does not understand what the people of the country want, as he cannot hear anything except the voice of his 'friends'," Gandhi said in a tweet in Hindi, mounting an acerbic attack on the Modi government.

BJP leaders, however, lauded the government's decision to raise the upper age limit for recruitment under the Agnipath scheme to 23 years from 21 for this year, with party chief J P Nadda saying it shows Prime Minister Narendra Modi is fully seized of the concerns of the country's youth and is making efforts for their bright future.

Unfazed by the intensifying protests, the Army, Navy and the Air Force on Friday announced they will start the enrolment process under the new model by next week. Air Chief Marshal VR Chaudhari told PTI that the selection process by the Indian Air Force for recruitment under the new scheme will start from June 24, while the Army said it will begin the initial exercise within two days.

The three services are planning to deploy the first batches of recruits under the new scheme, both in operational and non-operational roles, by June next year, senior military officials said.