Programme designed to tell people they need to unite and go back to the country which is not at war with itself, says Congress leader 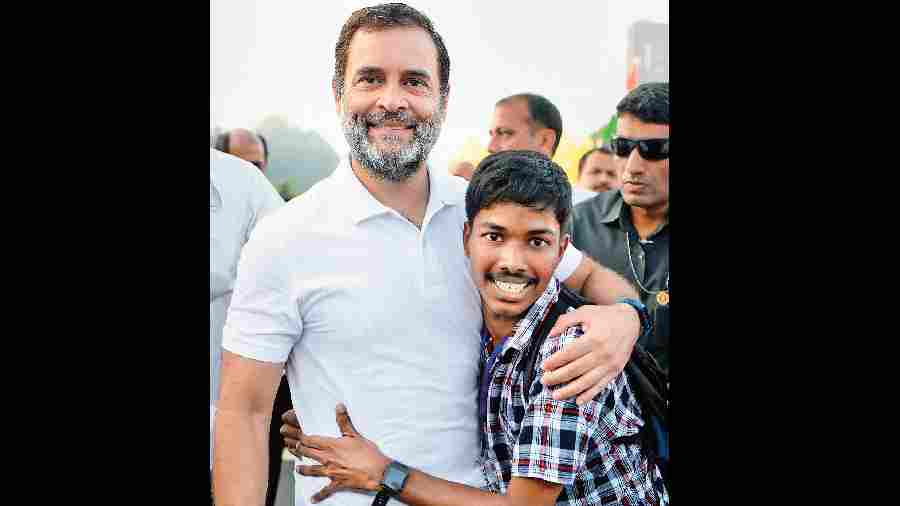 Rahul Gandhi on Thursday contested the perception that the Bharat Jodo Yatra was about preparing the Congress for the 2024 general election, asserting that its sole purpose was to send out a message that a divided and hateful India was unacceptable.

Rahul portrayed the Yatra as an ideological struggle against the RSS-BJP, saying millions were now involved in the programme to try and unite the country.

He said he wouldn’t fall into the trap of answering political questions, mainly related to the Congress presidential election.

“The nature of politics in India is such that if I talk to five people, you will link it to 2024. If I have ice cream with somebody, it will be said he has done it for the 2024 elections. But that is not true,” he said.

“The most important thing today, more than 2024, is Bharat ko toda ja raha hai, nafrat failayi ja rahi hai (India is being fractured, hate is being spread). This is unacceptable — that is our main message.”

Rahul, addressing a news conference in Ernakulam, said: “I am clear that my goal is to put it across to the people of India that the hatred, violence and arrogance now visible in India are not good for the country. This country has a tradition of humility, compassion, non-violence. That’s the true India. We are not going to accept an India that is divided, hateful.”

Rahul’s comments reflect a subtle shift in the Congress discourse from the secular-communal dichotomy, although the essence hasn’t changed. While stressing social harmony and unity, the party has been talking about the larger ideological questions of the nature of the Indian State, the future of democracy and the divisions spreading between and within communities.

Such a discourse goes beyond the simple Hindu-Muslim dichotomy that the RSS-BJP loves to deal with.

Rahul has been taking care to explain that the high prices and joblessness are linked to divisive politics.

“Three ideas are interconnected,” he said, arguing that people caught up in emotive issues allowed the government to capture democratic institutions and ensure the concentration of wealth in the hands of a few industrialists, leading to unemployment and inflation.

Asked about the defections by Congress MLAs in Goa, Rahul said: “We are fighting a machine that has the institutional framework of the country, a machine that has unlimited money to pressurise people, unlimited ability to buy and threaten people. The outcome of that, you saw in Goa.”

Asked whether the response to the Yatra, which has till now been confined to Tamil Nadu and Kerala, would be as good in the BJP-ruled states, he was confident.

“The response in Kerala has been overwhelming. We are facing devastating unemployment, prices and hate. The youth are particularly feeling the pain. It will not matter where we go; it will be the same in state after state after state,” Rahul said.