The controversy erupted when Harish Rawat, the general secretary in charge of Punjab, was quoted as saying Sidhu would be the party’s face in the elections 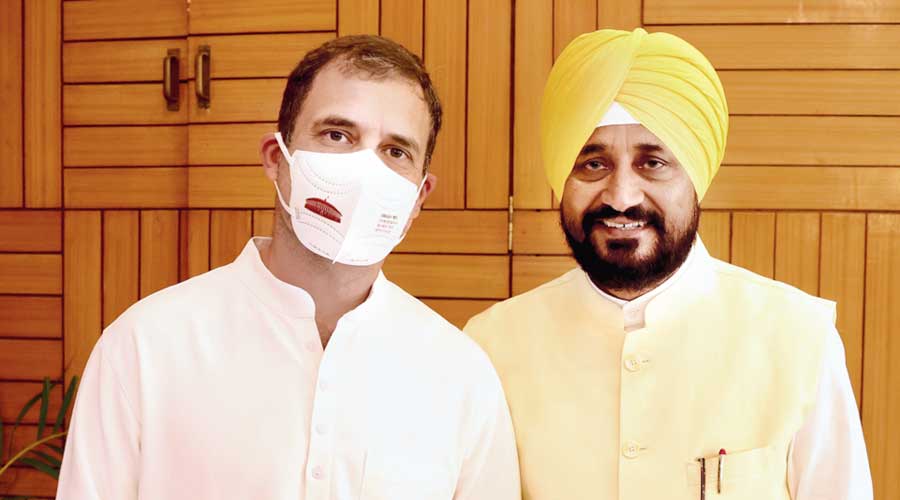 The Congress on Monday intervened forcefully to reject speculation that Charanjit Singh Channi’s elevation was a stopgap arrangement and that Navjot Singh Sidhu would be projected as the next chief minister of Punjab in the coming election.

Congress communications chief Randeep Singh Surjewala said: “Parties like the BJP, Akali Dal, AAP and BSP should stop attacking the poor and the Dalits of the country. They are having heartburn because the Congress has created history in Punjab by giving a Dalit chief minister. Sidhu is the head of the party and Channi is the head of the government. Both will together lead the party to victory. These two leaders and all the workers will be the face of the party in the election.”

The controversy erupted when Harish Rawat, the general secretary in charge of Punjab, was quoted as saying Sidhu would be the party’s face in the elections, due in February. What amplified this statement was the prompt reaction from senior Congress leader Sunil Jakhar.

“On the swearing-in day of Charanjit Singh Channi as chief minister, Mr Rawat’s statement that ‘elections will be fought under Sidhu’ is baffling. It’s likely to undermine the chief minister’s authority but also negate the very raison d’être of his selection for this position,” tweeted Jakhar, who had initially been seen as a frontrunner for the chief minister’s post.

The party high command also got rattled as this speculation could bulldoze the Dalit narrative that Channi’s appointment has built in favour of the Congress.

Surjewala said he had spoken to Rawat who said his comments had been misinterpreted and that he had clearly stated that both the state president and the chief minister would lead the party in the election.

“A false impression is being created. All the rival parties are having a stomach ache because the Congress has chosen a man from humble roots to head the government. Channi is now the only Dalit chief minister in the entire country. Why did the BJP not induct a Dalit chief minister? They have more than 12 chief ministers.”

While the AAP, BJP and BSP lapped up Jakhar’s response, accusing the Congress of deceptively deploying Dalit symbolism for four months to win the election, Rahul Gandhi removed any doubts about Channi’s leadership by attending his swearing-in.

Party sources insist that Channi will be given the freedom and authority to prove his worth and there should be no misgivings about the leadership’s intentions. There is no denying that several names were on the table but Channi was chosen because of the political significance of empowering a Dalit.

Jakhar, who is also bitter about certain leaders opposing him on the basis of his religion, responded to the Akal Takht jathedar’s statement that the religion of the chief minister was secondary and not critical to the choice.

The jathedar is the head of the Akal Takht, the highest temporal seat of the Sikh community.

Apart from some Punjab ministers, party veteran Ambika Soni, who has been an integral part of the high command structure for decades, had openly said she believed only a Sikh should lead the government in Punjab.

Many senior leaders were aghast at the statement, which went against the party’s secular ethos. Hindus make up about 40 per cent of Punjab’s population. The Congress has been trying to get the Hindu votes, which largely went to the BJP and the AAP.

The party tried to do fine balancing by appointing a Jat Sikh, Sukhjinder Singh Randhawa, and a Hindu, O.P. Soni, as deputy chief ministers.

The first thing the new chief minister did after taking the oath of office was to send out an unambiguous message to the agitating farmers.

“If farmers sink, the country will sink. Farming is the backbone of the economy. My government will stand with the farmers and not allow their interests to be damaged, come what may. I appeal to the central government to scrap the (new) farm laws,” Channi said.