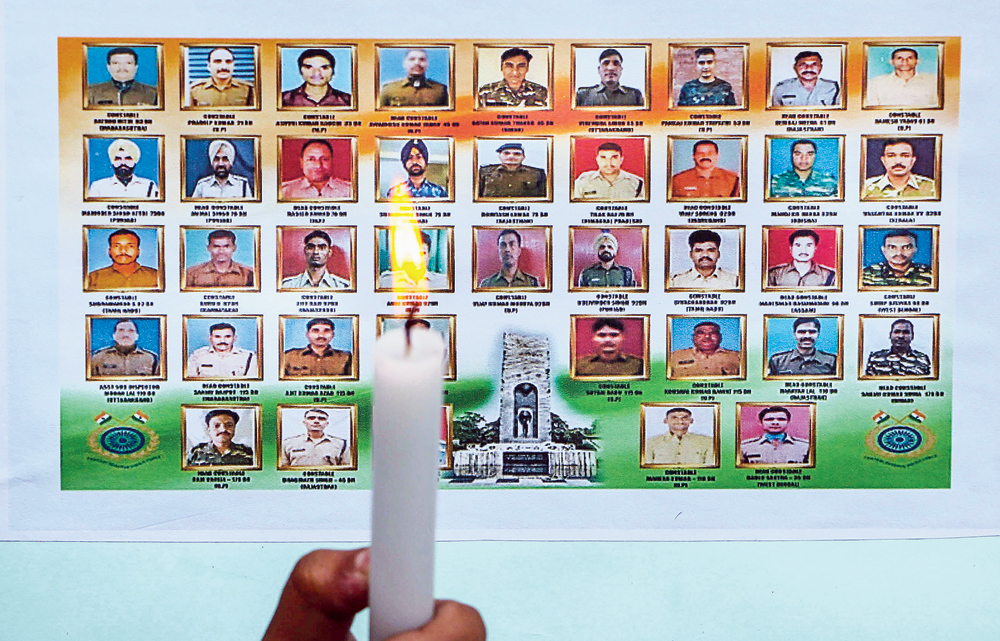 As many as 40 CRPF jawans were killed on the Srinagar-Jammu highway in Kashmir’s Pulwama on February 14, 2019, after a Jaish-e-Mohammed suicide bomber rammed his car into a convoy of the paramilitary force around 3.30pm.

One year has passed since then but key questions have yet to be answered by the government about the attack that brought India and Pakistan to the brink of war and was followed by cross-border air strikes by both countries.

The federal National Investigation Agency (NIA) is probing the case but it has not disclosed any insight into how the attack could be carried out in one of the world’s “most militarised zone”.

On Friday, The Telegraph spoke to two senior officials — one in the NIA and the other in the Union home ministry now helmed by Amit Shah — on the progress of the investigation.

The NIA official said: “We submitted an internal report to the government pointing out a security breach.”

Asked, the home ministry official said: “It is the government’s decision whether it wants to disclose the internal report on the intelligence failure and security breach.”

Another NIA official said: “The probe had almost hit a dead-end as the suspects in the case are dead. We still do not know who provided the explosives to the suicide bomber, Adil Ahmad Dar, and from where they were procured.”

The following are some of the questions that have not been answered even one year after the attack:

A retired CRPF official, basing his information on conversations with serving officers, said: “The stretch on which the incident took place was believed to have been sanitised long before any convoy passed through it. There was complete intelligence failure. The government should have held the top brass in the security establishment accountable for such a glaring security breach. One year has passed but the government has not spoken a word on the intelligence failure, forget about fixing accountability.”

In June last year, junior home minister G. Kishan Reddy had told Parliament that there was no intelligence failure in the terror attack on the CRPF convoy. Reddy’s reply was in contrast to a statement by then Jammu and Kashmir governor Satya Pal Malik who had said the terror attack was partly the result of an intelligence failure and admitted there were lapses on the part of the state administration and security forces.