Advertisement
Home / India / Psst! A prank to save your black buck

Psst! A prank to save your black buck

Surprise: Everybody got the Donald Trump result wrong but an Indian newspaper "scooped" the demonetisation news months before Prime Minister Narendra Modi broke it to the nation. 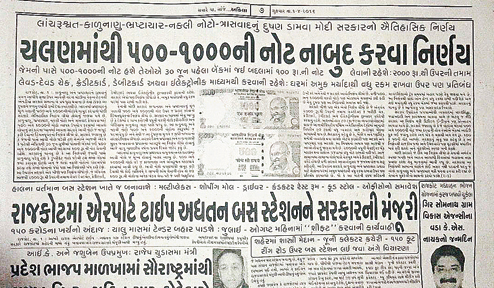 Surprise: Everybody got the Donald Trump result wrong but an Indian newspaper "scooped" the demonetisation news months before Prime Minister Narendra Modi broke it to the nation.

Surprise, surprise: The Gujarati publication is not claiming credit, pointing to the April 1 date and explaining that it was a prank to tickle readers on All Fools' Day.

Akila, a Rajkot-based eveninger, had reported on April 1 that "the government which came to power on the plank of removing corruption and black money is completing two years and as a first step towards this, Rs 500 and Rs 1,000 notes are to be removed from circulation".

Over seven months later on November 8, Prime Minister Modi told the nation that notes of Rs 500 and Rs 1,000 were being demonetised.

A line above the newspaper headline echoed what demonetisation backers are saying now: "Historic decision against bribe, black money, corruption, fake currency and the evil of terrorism."

Had any black-money holder taken Akila seriously on April 1, he or she would have had a wide window of several months to convert the marked notes into those of Rs 100.

It is not uncommon for newspapers to publish articles on imaginary - and improbable - events on days such as April 1. Some do carry disclaimers.

Akila editor Kirit Gantara told The Telegraph that the currency report was intended to be a prank. "It is just a coincidence that the Modi government took such a decision. It's a sheer coincidence," Gantara said.

The editor said that not just his newspaper but almost all newspapers in Saurashtra carried stories that were not authentic but meant to "amuse" the readers. "This is what we did on April 1. It was not a genuine news report."

Like many editors in Gujarat, Gantara said, he knew Narendra Modi since the Prime Minister's days as an RSS pracharak and still enjoyed a good rapport with him. The claim could not be corroborated with Modi.

Gantara said he himself had written the "story". "If it was authentic news, some leading newspapers would have got the story, not us," he added.

The editor said his imagination and his certitude that Modi would do something drastic to curb black money had helped him "manufacture" the report that happened to come true this week.

Gantara added that his imagination and his certitude that Modi would do something drastic to curb black money had helped him "manufacture" the report.

Here's a forecast less hazardous than that on Trump: the next April 1 edition of Akila will be a sell-out.