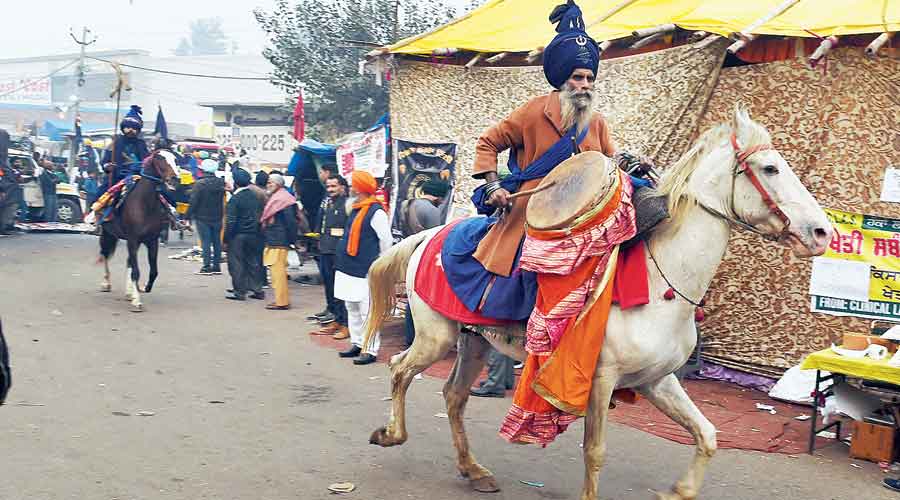 The Samyukta Kisan Morcha (SKM) on Friday asked the Narendra Modi government to stop using the National Investigation Agency (NIA) to target those helping the farmers sustain their protest and making contributions to the families of those who died during the movement.

This was forcefully taken up by farmer organisations during their ninth meeting with the government interlocutors on the three farm laws.

The SKM delegates said transporters who had given their buses to ferry people to and from the protest sites were being targeted by the NIA. Cases with grave charges were being registered against nearly 100 farmers involved in the vandalism of the stage prepared for Haryana chief minister M.L. Khattar’s “kisan panchayat” in Kaimal village of Karnal on Sunday, they added.

According to farmer union leaders, the ministers at first sought to blame the state government for bus owners being targeted but they were given a fact-check.

“We told them that this was being done by the NIA, which comes under the Centre. The NIA has been visiting their houses and also the house of those who had contributed towards compensation for the martyrs. ‘What is this, if not revenge? Is this the way a government should be behaving with people who are protesting peacefully in a democracy?’ we asked,” All India Kisan Sabha general secretary Hannan Mollah told The Telegraph.

Underlining that buses are used by organisers for Prime Minister Narendra Modi’s rallies, too, the union leaders said the targeting of the facilitators was essentially an attempt by the government to weaken the movement after efforts to discredit the protesters with all sorts of name-calling had failed.

The ministers, according to Kavita Kuruganti of the Mahila Kisan Adhikaar Manch, said they would address this issue as well as the disruption of a farmers’ protest by BJP and Bajrang Dal workers in Andhra Pradesh.

At the meeting, the union leaders rejected the government’s proposal to leave to the Supreme Court the matter of repealing the three farm laws enacted by Parliament, calling it an abdication of responsibility by the Centre.

“These laws were made by Parliament, and they should be repealed by Parliament,” the SKM said after the meeting, during which the ministers again pushed for amendments to the three laws.

The government tried to convince the union leaders to set up an informal committee themselves and present a coherent legal view of the laws and their expectations from the government.

“They can give us a proposal and we will discuss it with an open mind. We have acknowledged many of their apprehensions and given them a written suggestion also, but they rejected it,” agriculture minister Narendra Singh Tomar told reporters after the meeting.

The union leaders said they had made their position clear to the government not once but several times and that they had only one demand on the farm laws: repeal them.

Tomar said the government would present its case before the Supreme Court-appointed committee, adding that everyone should respect the directions of the court in a clear reference to the decision of the SKM not to engage with the process.

He wanted to know when the farmers intended to call off their protest, questioning the rationale in discussing minimum support price when the farmers were stuck on repealing the three farm laws.

“It was clarified that both are equally important demands, and the next meeting’s agenda was fixed on both these points, and not just one or the other,” Kavita said.

The unions also explicitly told the ministers that the ongoing movement had nothing to do with the US-based pro-Khalistani group, Sikhs for Justice (SFJ), and “therefore, there should be no projection from the government’s side that they are involved”.

Since the beginning of this week, a mail purportedly from the SFJ, which is banned in India, has been received by some journalists, offering a cash prize of $250,000 for anyone hoisting the Khalistani flag at India Gate on January 26 and legal assistance to secure such a person asylum in the UK. The government’s ecosystem has used this to build a narrative against the farmers’ movement.

The farmers see this as another attempt to discredit the movement but are trying to ensure that no mischief is created in this guise. They know their struggle is at a crucial stage and the government would try to use any incident to build a case for their removal from the protest sites ahead of Republic Day, when they plan a Kisan Parade after the official event not just in Delhi but across the country.