Cometh the hour, cometh the sister 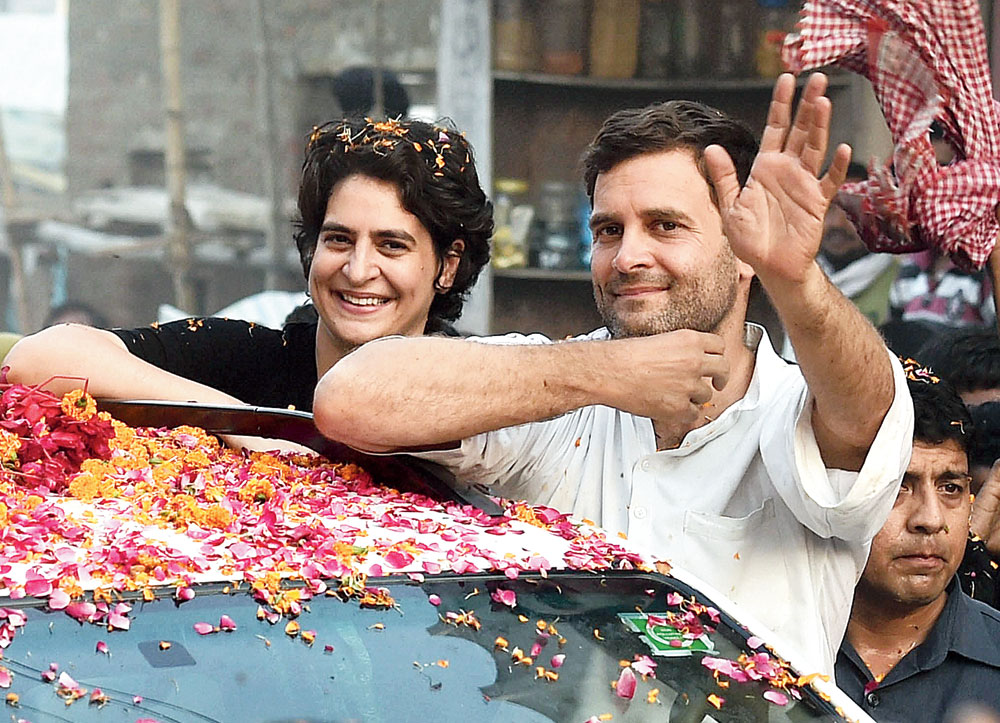 Asked whether Priyanka would contest, Rahul said it would be her decision.

“UP is central to building a new hope filled & compassionate India. The new UP AICC team led by Priyanka & Jyotiraditya will herald the dawn of a new kind of politics in the state. We will offer the youth in UP a dynamic new platform to transform the state,” he tweeted in the evening.

Wednesday’s development comes amid speculation about a further consolidation within the Nehru-Gandhi family: many in the Congress expect Varun Gandhi to join the party within a few days.

Priyanka has been campaigning in Amethi and Rae Bareli since 1999, and Congress workers have been demanding at least since 2005 that she enter active politics.

She will now be unshackled from her self-imposed restraint on electioneering anywhere other than these two constituencies, and is poised to emerge as one of the top campaigners in the party.

While Priyanka will be focusing on Uttar Pradesh after she formally takes charge in the first week of February, she will campaign in select constituencies in other states as well.

The Congress has identified around 30 winnable seats in Uttar Pradesh and will be concentrating its energy and resources on them.

Scindia, who played a key role in the Madhya Pradesh elections, is a dynamic leader whose popularity cuts across regional barriers and whose stature has grown fast. His appointment has elated Congress workers in the region.

The veteran Ghulam Nabi Azad, who had so far been looking after party affairs in the heartland state, has now been given charge of Haryana, another state the Congress is yearning to wrest from the BJP.

K.C. Venugopal, general secretary in charge of Karnataka, has been given additional charge of the party organisation, a responsibility Ashok Gehlot used to handle before he became Rajasthan chief minister.

Priyanka Gandhi Vadra took the plunge into politics on Wednesday, answering a longstanding demand from Congress leaders and workers and joining an electoral battle that is being seen as India’s most important ever.

Her entry is bound to enthuse Congress workers across the country, providing a second booster dose after the victories in Madhya Pradesh, Rajasthan and Chhattisgarh.

It appears a well-thought-out plan: Congress president Rahul Gandhi had, during his Dubai interaction with journalists, promised a surprise in Uttar Pradesh while responding to a question.


Unlike many cases where family is the party, for the BJP, the party is family
- Narendra Modi addressing BJP workers based in Maharashtra


I’m very happy that my sister, who is very capable and hardworking, will work with me. I’m personally very happy
- Rahul Gandhi in Amethi


Congress readies Plan B amid UP haze

On Wednesday, Rahul said in Amethi: “My sister is capable and hardworking. People have wasted too much time here in UP. The BJP government has ruined this state. I particularly appeal to the youth and the poor to wake up and accept the new leadership.”

Rahul has unleashed a charm offensive in the heartland state by giving its charge jointly to Priyanka and Jyotiraditya Scindia, who will be general secretary in charge of western Uttar Pradesh. The charismatic combination is expected to help the party deal with organisational deficiencies.

Priyanka’s decision to formally enter politics now, after her long engagement with behind-the-scenes management, indicates the family’s determination to throw all its resources into the 2019 battle.

Sources said she might contest the parliamentary election from Rae Bareli, the constituency held by Sonia Gandhi who has almost withdrawn from active politics.

Senior Congress sources said the final decision had not been taken but it was unlikely that three members of the family would contest. There is also speculation of Rahul shifting to Rae Bareli and Priyanka taking up Amethi.