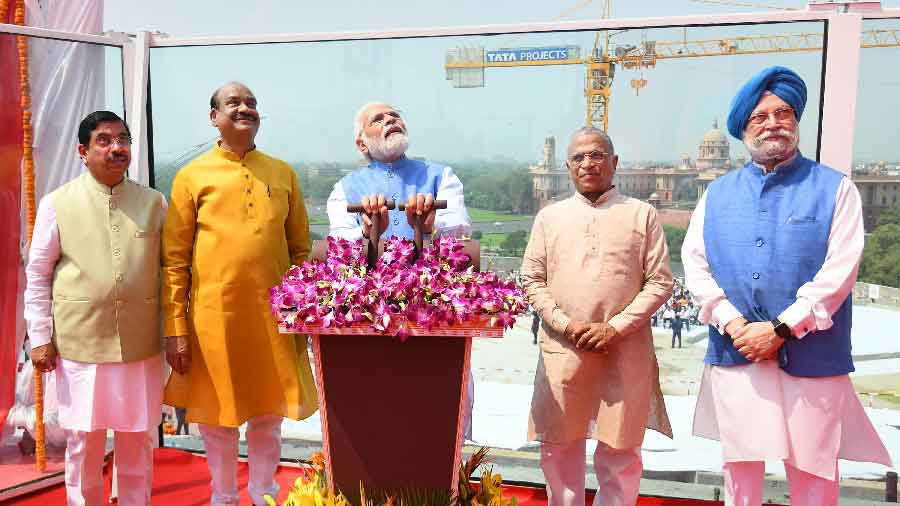 Prime Minister Narendra Modi on Monday unveiled the national emblem cast atop the new Parliament building, marking the first major milestone ahead of the building's scheduled opening for later this year.

Opposition parties such as the CPI(M) and the AIMIM criticised the inauguration by Modi, saying this was a "violation" of the Constitution which envisages separation of power between the Executive and the Legislature.

"This morning, I had the honour of unveiling the National Emblem cast on the roof of the new Parliament," Modi tweeted.

This morning, I had the honour of unveiling the National Emblem cast on the roof of the new Parliament. pic.twitter.com/T49dOLRRg1

Authorities have maintained that the Parliament's Winter Session will be held in the new building.

The prime minister also interacted with workers involved in the building's construction and told them that they should feel proud of their work. They are making a very big contribution to the nation's pride, he said.

"I had a wonderful interaction with the shramjeevis' who have been involved in the making of Parliament. We are proud of their efforts and will always remember their contribution to our nation," he tweeted.

When a worker expressed joy at his visit to the site and likened it to Lord Ram's arrival at Shabri's hut, a reference to epic Ramayana, Modi said light-heartedly, "Wah, wah, this is your hut!" He then added that every poor person of the country should also feel that this is his hut. "You have said a very good thing," the prime minister said.

When he asked them if they feel that they are making a building or history, they said in a chorus, "History".

The Prime Minister's Office (PMO) said the 6.5-metre-high emblem is made of bronze and weighs 9,500 kg. It has been cast at the top of the central foyer of the building, and a supporting structure of steel weighing around 6,500 kg has been constructed to support it.

The concept sketch and process of casting of the national emblem on the roof of the new Parliament building has gone through eight different stages of preparation from clay modelling and computer graphics to bronze casting and polishing, the PMO said in a statement.

Criticising Modi's presence, All India Majlis-e-Ittehadul Muslimeen (AIMIM) president Asaduddin Owaisi said, "The Constitution separates powers of parliament, government & judiciary. As head of the government, the prime minister should not have unveiled the national emblem atop the new Parliament building."

The Speaker of Lok Sabha represents Lok Sabha which isn't subordinate to the government, and the prime minister has violated all constitutional norms, alleged Owaisi, who is a Lok Sabha member from Hyderabad.

In a statement, the Polit Bureau of the CPM said the prime minister's action was a "clear violation of the Indian Constitution".

It said the Constitution unambiguously separates the three wings of our democracy - the Executive (government), the Legislature (Parliament and state assemblies) and the Judiciary.

"This Constitutional separation of powers between the three wings is being subverted by the head of the Executive," the CPI(M) said.

Hitting back at Owaisi, the BJP said he is always driven by a negative mindset and constantly attacks the country's political, moral, social, cultural and constitutional values to run his party.

"He does it habitually," BJP spokesperson Sudhanshu Trivedi said replying to a question at a press conference.

Citing a verse, Trivedi said even the best of doctors have no cure to doubts, and added that only those with the "official and statutory" positions were involved in the unveiling of the emblem.

NCP leader Majeed Memon wondered why the government had kept away opposition leaders from the ceremony to unveil the national emblem atop the new Parliament building. He, though, added that he had no objection to the prime minister unveiling the national emblem. "It is his right as he is the tallest leader of the country," Memon said.

The CPI(M) also took objection to the religious ceremony organized at an event to unveil the national emblem cast.

National emblem installation should not be linked to religious ceremonies. It is everyone's emblem, not those who have some religious beliefs. Keep religion separate from national functions, said CPI(M) in a tweet.

CPI General Secretary D Raja said the Parliament belongs to everyone and wondered "how a private event" was organised there.

Attacking the government, TMC MP Jawhar Sircar said MPs, who will occupy this building, were never consulted, and alleged that "Modi will now zap us with a mediocre architecture designed by his crony architect at exorbitant costs".