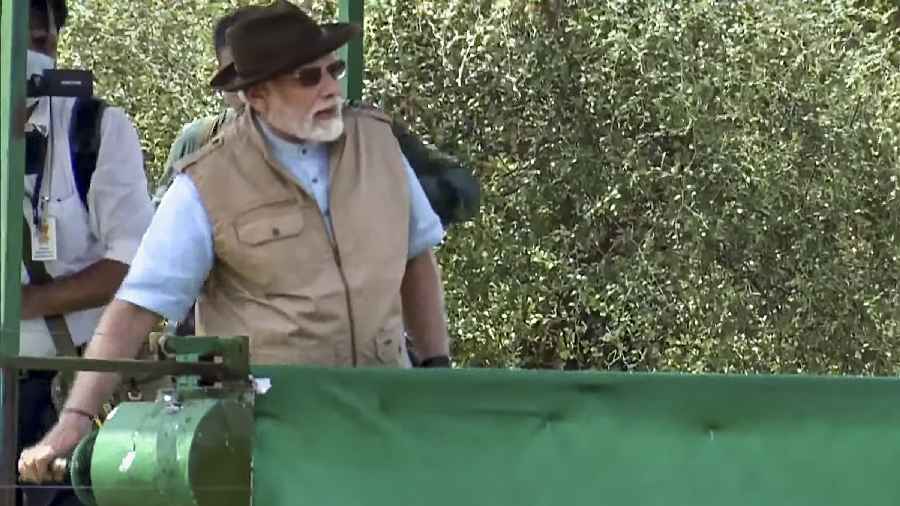 Prime Minister Narendra Modi turned 72 on Saturday, with greetings from leaders and other prominent personalities pouring in and admirers hailing his contribution to making a "strong and self-reliant" India.

From a 15-day blood donation drive in the country to cleanliness and tree plantation campaigns and health camps, scores of welfare activities, like in past years since 2014, were undertaken by the ruling BJP and others in various parts of the country to mark the prime minister's birthday.

It was a busy day for Prime Minister Modi, who released cheetahs brought from Namibia at the Kuno National Park in Madhya Pradesh, under a landmark project seven decades after the animal was declared extinct in the country, and also addressed several events.

Normally I meet my mother on my birthday and seek her blessings. Today so many mothers of Madhya Pradesh have blessed me, Modi said, addressing a large gathering of women at Sheopur (MP).

The prime minister said he enjoys the blessings of lakhs of mothers and described women as his strength and inspiration.

Modi said his mother would be mighty pleased with the outpouring of blessings from women.

There has been a massive difference in the India of last century and the present Naya Bharat in the form of women-power, Modi said at the meeting of Self-Help Groups.

Home Minister Amit Shah hailed him as the flag-bearer of Indian culture who has connected the country to its roots and led it forward in every field.

Under his farsighted leadership, India has emerged as a world power and he has distinguished himself as a global leader respected by the world, Shah said.

Modi's life symbolises service and dedication, he said, calling him the builder of a secure, strong and 'Aatmanirbhar' new India.

The Congress' greetings, however, were laced with criticism of the prime minister and his policies, with its youth organisation saying it was observing "National Unemployment Day' on Saturday.

"Our ideological and political battles against him continue. His personal vendetta against us intensifies. Even so, here is wishing and greeting our Prime Minister Narendra Modi on his 72nd birthday," Congress general secretary in-charge communications Jairam Ramesh said in a tweet.

Nepal's Prime Minister Sher Bahadur Deuba was among the leaders who greeted the prime minister.

"On the occasion of your birthday, best wishes for good health and long life. May Shri Pashupatinath always protect you," he tweeted,

Tibetan spiritual leader the Dalai Lama, in a letter to Modi, extolled India's efforts under the prime minister in meeting the challenges posed by the coronavirus pandemic.

As the longest-staying guest in India, I have observed its development first hand. Now the country is also a rising economic power and a leader in science and technology," he stated in the letter.

The Dalai Lama also hailed the country's "strong democratic foundation" and called it an example of peace and stability.

"I am delighted to say India is poised to assume its rightful place in the world," he said.

Defence Minister Rajnath Singh said his leadership has boosted progress and good governance like never before and taken India's prestige and self-respect to a new high.

He has given a new dimension to Indian politics and importance to the welfare of the poor along with development, Singh said.

An RSS pracharak from a young age, Modi was drafted into the BJP's organisation and later became Gujarat chief minister in 2001.

Since then, he has achieved the unique feat of never losing the state, and now national election when he has been the face of the party.

Prime Minister Modi and the BJP have used the occasion of his birthday to launch 'seva' and development initiatives since 2014.

In the national capital, Union Health Minister Mansukh Mandaviya donated blood at a camp set up at Safdarjung Hospital to mark the the 'Raktdaan Amrit Mahotsav' on Modi's birthday.

So far, 5,980 camps have been approved across the country and around 1,50,000 donors have registered, an official said.

A museum that highlights the importance of water conservation, located on the campus of Sulabh International, was inaugurated by Governor of Sikkim Ganga Prasad in the presence of senior officials.

The Goa government carried out a cleanliness drive at 37 beaches across the state, with Chief Minister Pramod Sawant and Governor P S Sreedharan Pillai joining volunteers at Miramar beach.

Workers of Namami Gange' organised a cleanliness drive at the Namo Ghat, and also cut a cake to mark the PM's birthday.

Exhibitions on Modi's life were also organised at many places including at the BJP headquarters in the national capital where BJP chief J P Nadda inaugurated it.

An e-auction of gifts the prime minister has received began on Saturday. Proceeds from the auction will be used for 'Namami Gange', the Clean Ganga campaign.

In his address after kicking off the cheetah introduction project conceived by the previous United Progressive Alliance (UPA) government in 2009, Modi also thanked Namibia for help in the programme to reintroduce cheetahs in India.

Wearing a pale blue kurta, light brown jacket, a pair of sunglasses and donning a dark brown hat, the prime minister also clicked photographs of the cheetahs on a DSLR camera following their release. These animals are radio-collared.

Modi said Project Cheetah was his government's endeavour towards environment and wildlife conservation.

"It is right that when nature and environment are conserved, our future becomes secure. It also opens up vistas for development and progress.

"Cheetahs will sprint again in KNP and will restore grassland ecosystems and bolster biodiversity... In the 21st century, India is sending out a message to the world that economy and ecology are not opposite fields. India has shown to the world that by protecting the environment, the country can also progress,'' the prime minister said.