Modi is holding 'Rozgar Melas', handing out appointment letters, and has addressed the melas giving 75,000 letters in Delhi 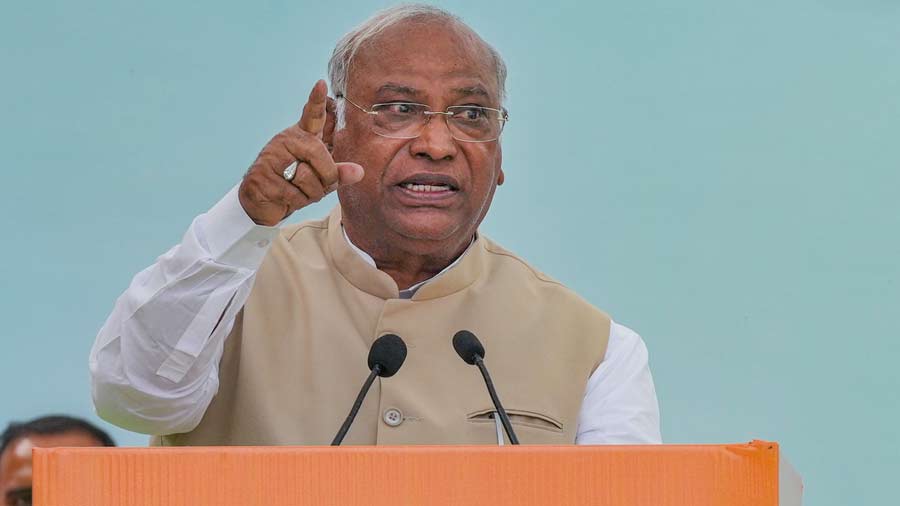 Congress president Mallikarjun Kharge on Saturday launched a scathing attack on Prime Minister Narendra Modi over the issue of unemployment, saying the PM is handing over some thousand appointment letters when "millions of youth search for jobs".

Prime Minister Modi is holding 'Rozgar Melas', handing out appointment letters, and has addressed the melas giving 75,000 letters in Delhi, 13,000 in Gujarat, and 3,000 in Jammu and Kashmir, Kharge said.

"Today, when millions of youth search for jobs, PM is handing over some thousand appointment letters!" the Congress president said in a series of tweets.

Kharge said rural India is facing the unprecedented challenge of unemployment. The average rural inemployment in the past 6 years is 7.02 per cent according to the Centre for Monitoring Indian Economy (CMIE), he said.

"Our youth is forced to wait for years to get a government job. All this is because of lack of will and false promises by the BJP," he said.

Kharge claimed the situation is so desperate that for 40,000 posts under the Agnipath Scheme, the government received 35 lakh applications.

"For a few thousand posts in Uttar Pradesh, 37 lakh applications were received. Post-graduates and PHDs are applying for jobs well below their qualifications," he claimed.

Noting that armed forces and CAPFs are important pillars for the security and safety of our nation, Kharge said currently there are more than 2 lakh vacancies in the Armed Forces and CAPFs.

However, the recruitment in the last two years has remained absolutely "dismal", he added.

"We are still dealing with the disastrous effects of the pandemic on our education system and the resulting learning loss. However, there are still 18,000 vacancies in the central government schools," he claimed.

"How does the government expect these schools to impart education with such vacancies," Kharge asked.

Higher education Institutions, including IITs, IIMs, and Central Universities, have more than 61,000 vacant teaching and non-teaching posts, the Congress president said, citing that in central universities and Delhi universities, 20,291 posts are vacant, 962 in IIT Bombay, 1,287 in Allahabad university and 1,804 in Aligarh Muslim University.

"The country was devastated during the Covid-19 pandemic. We saw everything. Shortage of doctors, nurses, medical staff, medicines, etc. However, the government has still not learnt its lesson," Kharge said, adding that 1,03,544 positions of key Anganwadi care-workers are vacant.

"The situation of the country's foremost hospital and public medical research university is a case in point. At AIIMS Delhi, total vacancies 3,768. Total recruitment since 2017 1,893 (merely 470 per year)," he said in another tweet.

The Congress president said the BJP claims to be working for the welfare of SCs, STs, OBCs and other backward communities but according to its own response in Parliament, a large number of backlog and unfilled vacancies still remain for SCs, STs and OBCs.

"What is the Modi Govt's plan for filling such vacancies," he asked.

The share of regular employees in Central Public Sector Enterprises (CPSEs) has consistently decreased in the last eight years, Kharge said, citing that it has decreased from 14 lakh in 2011-12 to 9 Lakh in 2019-20.

"Modi Sarkar has failed to generate new employment opportunities for the youth! We don't hear 'Make in India' 'Skill India' anymore! What happened to these programmes & their slogans? Where are the 16 Cr jobs that you promised? Why are you silent, Modi ji?" Kharge said.

The Congress has been attacking the government over alleged lack of jobs for the youth and rising unemployment.