Pramod humbled by govt's decision to confer Khel Ratna on him 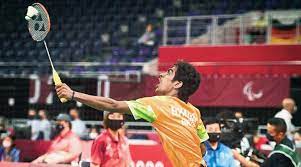 Pramod Bhagat, the winner of badminton gold medal at the recent Tokyo paralympics, is humbled by the Union sports ministry’s decision to confer the Major Dhyan Chand Khel Ratna award on him.

The young para shuttler from Odisha’s Bargarh will receive the highest sporting award of the country in New Delhi on November 13. “I am delighted and humbled at the same time. It also reminds me of the struggle of my parents in raising me and helping me fulfil my dreams. They are no more but I know their blessings will always be with me,” said Bhagat who was affected by polio at the age of five.

The fact of developing a handicap because of polio at a young age, however, did not deter Bhagat from working hard to realise his dream of becoming a top badminton player. “I have never ever regretted the fact of being affected by polio. In a way it has been a blessing in disguise and has always propelled me to work hard to achieve my goals,” added Bhagat who is aiming to win another gold in the 2024 paralympics.

Bhagat, who is getting married early next year, plans to put Rs 6 crore that he had received from the Odisha government for his gold at Tokyo to good use. “I intend to spend a part of it on the development of para-badminton in the state,” Bhagat said.

Bhagat is now an inspiration for sportspersons of his generation in the state.

Bhagat, who is the first para-badminton player from Odisha to achieve such dizzy heights, urged the state government to focus more on developing facilities for para-sports. “The government is planning to build 80 stadiums across the state. I will request the authorities to ensure that all these stadiums have facilities for the training of para-athletes and sportspersons. This is the best way of promoting para-sports,” said the champion who has made the country and the state proud with his achievements.

Congratulating Bhagat, chief minister Naveen Patnaik tweeted: “Glad to share that Odisha would be hosting the 4th National Para Badminton Championship in Bhubaneswar from 24-26 December 2021. This will further cement Odisha’s position as the Sports Capital of India and inspire para athletes to embrace sports.”